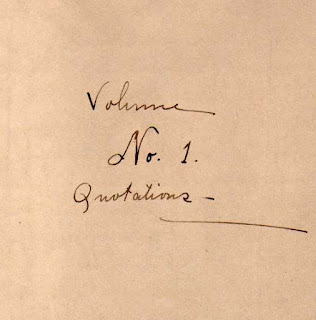 In September 1895 Frances Glessner began collecting quotations in a book she labeled simply “Volume No. 1 Quotations.”  Over the next 34 years, she filled 194 pages with more than 1,200 quotations gathered from a variety of sources.  Most are written in her own hand, a few are clipped from periodicals.  Reading through the quotations provides a great deal of insight into her character, and the values that she considered most important in her life.  It is believed that the quotations were gathered to be shared with her family over breakfast. 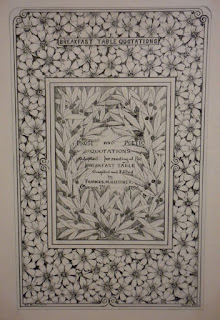 Family friend Isaac Scott designed two elaborate covers for her book of quotations, which for reasons unknown, were never used.  The two covers were mounted and one was framed, so perhaps Frances Glessner found them so attractive that she preferred to display them.  The first cover, shown above was designed by Scott in 1896 in Boston, and is labeled:
Breakfast Table Quotations
Prose and Poetic
Quotations
adapted for reading at the
Breakfast Table
Compiled and Edited
by
Frances M. Glessner
Chicago, Ill.              1896
The words are set amongst a lush pen and ink design of foliage and flowers, typical of much of the work Scott designed for the Glessners including furniture, metalwork, and embroidery designs. 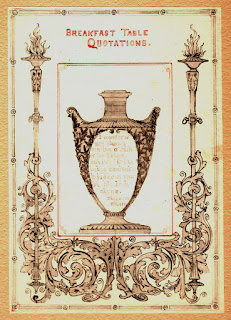 The second cover, shown above, is executed in ink and watercolor wash and is undated.  Entitled Breakfast Table Quotations, the design features a large urn surrounded by elaborate scrollwork with torchieres at either side.  Within the urn is the following quotation:
“I wonder at men always ringing a dish or jar before buying it but being content to judge of men by his look alone.”
The quote is attributed to Diogenes, a Greek philosopher born about 412 B.C.  It was apparently a favorite quote of Frances Glessner, to be featured on the intended cover for her quotation book.
(NOTE:  Both book covers are on display in the butler's pantry at the museum).

Immediately following the title page in the quotation book is a page featuring five quotes, which precedes page 1 on which the numbered quotations begin.  These may have been favorite quotations and appear to have been written at different times.

The first quotation comes from Benjamin Disraeli (1804-1881), who served as British Prime Minister in 1868 and again from 1874 to 1880.  He played a central role in the creation of the modern Conservative Party in the 1840s.  His quote reads:
“It is much easier to be critical than to be correct.”

The second quotation comes from Joseph Joubert (1754-1824), a French moralist and essayist.  He wrote extensively but published nothing in his lifetime.  His widow gave his notes and papers to Chateaubriand who in 1838 published Collected Thoughts of Mr. Joubert.  The quotation in Frances Glessner’s book reads:
“Good maxims are the germs of all excellence.”
It comes from a slightly longer quotation which reads in full:
“A maxim is the exact and noble expression of an important and indisputable truth.  Good maxims are the germs of all excellence; when firmly fixed on the memory, they nourish the will.” 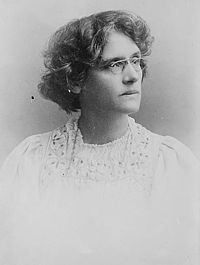 The third quotation was written by Beatrice Harraden (1864-1936) a British writer and suffragette.  It comes from her debut novel, Ships That Pass in the Night, a love story set in a tuberculosis sanatorium.   Although that book was a best-seller, Harraden never again achieved the same acclaim for her subsequent works.  She became an ardent suffragette and wrote extensively in the suffragette paper Votes for Women.  The quote from her novel included in Frances Glessner’s book reads:
“What does matter is to judge gently, and not come down like a sledge-hammer on other people’s feelings.”
In the novel, the next line reads:
“Who are we, any of us, that we should be hard on others?”

The fourth quote comes from a book entitled Thoughts, written in 1886 by Ivan Panin (1855-1942), a Russian emigrant to the U.S. who achieved fame for claiming to have discovered numeric patterns in the text of the Hebrew and Greek Bible.  Most of his published works deal with this topic, but Thoughts, among his first published works, contained “435 sententious observations on abstract subjects, such as misfortune, charity, truth and love” according to a review in the New York Evening Post.  The review goes on to say that “the writer’s excuse for the book is characteristically given as follows”:
“All that is good has been said before;
All that is noble has been thought before.
But is there less need now of resaying the good,
of rethinking the noble?”
That is the quote which Frances Glessner recorded in her book of quotations.

The last quotation is unattributed.  Similar versions are found in various sources, but none exactly worded as Frances Glessner recorded it:
Have you learned to think and judge without prejudice?”

Taken together, these five random quotes, brought together on a single page by Frances Glessner, serve as a window into her character, and show the breadth and scope of the books and periodicals she was reading on a regular basis.   Each quotation invites the reader to look deeper into their own soul, and to consider the thoughts and feelings of their fellow human being.  Penned well over a century ago, the words still ring true today and continue to inspire and provide direction in a world that is so different from that of Frances Glessner, but in many ways, has not changed at all.
Posted by Glessner House Museum at 4:03 PM