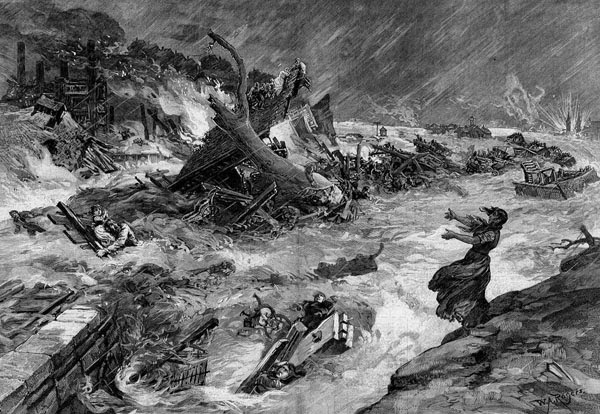 Saturday May 31, 2014 will mark the 125th anniversary of one of the worst disasters in American history – the Johnstown Flood.  The Glessners were staying at the Brunswick Hotel in New York at the time, and two mentions of the calamity were made in Frances Glessner’s journal. 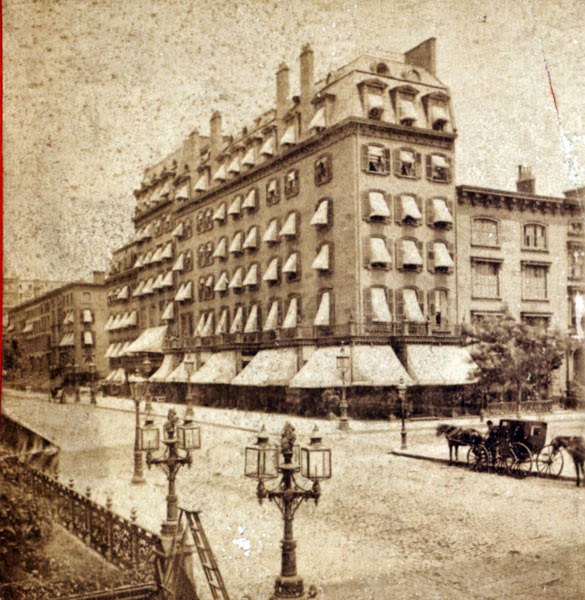 June 1st, 1889:
It rained at intervals all day yesterday and the wind blew in a most disagreeable manner.  Today we got up very early for John was to leave by the Penn. route for home (Chicago).  We went to a very early breakfast and found by the paper that the town of Johnstown Penn. had been swept away by a flood and all the trains were stopped – so John went to the ticket office and stopped his trunk and changed his route to the Mich. Central.

June 2nd:
Today I am alone and have rested on the bed and have read the account of the Johnstown flood.  The papers estimate the loss of life at over 1000 persons. 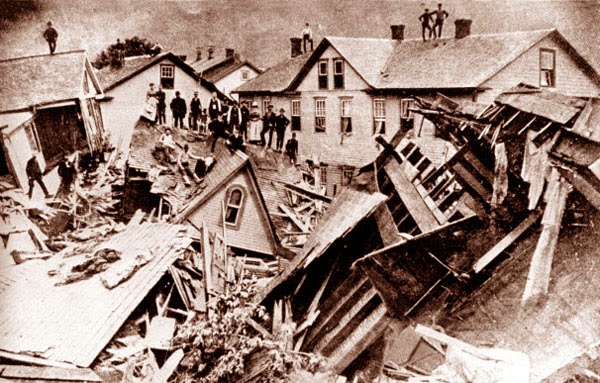 The Johnstown Flood of 1889 occurred when a dam located 14 miles upstream of Johnstown, Pennsylvania on the Little Conemaugh River failed after days of unusually heavy rainfall.  It is estimated that 20 million tons of water (equivalent to 4.8 billion gallons) were released from the reservoir behind the dam, known as Lake Conemaugh.   The lake itself covered approximately two square miles and was situated 450 feet above Johnstown.  More than 2,200 people were killed, and many of the bodies were never found or identified.  The disaster resulted in the largest loss of civilian life in the United States at the time, only to be surpassed by the 1900 Galveston hurricane and the September 11, 2001 terrorist attacks.  Property loss was estimated at $17 million including the total loss of four square miles of downtown Johnstown and more than 1,600 homes.

Johnstown was located in the narrow Conemaugh Valley in the Allegheny Mountains and the area was always subject to flooding due to its terrain and the large amounts of runoff from rain and snowfall.  The South Fork Dam was constructed between 1838 and 1853 as part of the canal system in the state.  It was eventually sold into private hands and acquired by industrialist Henry Clay Frick and other wealthy Pittsburgh residents, who converted the private lake into a summer resort.  The South Fork Fishing and Hunting Club opened in 1881. 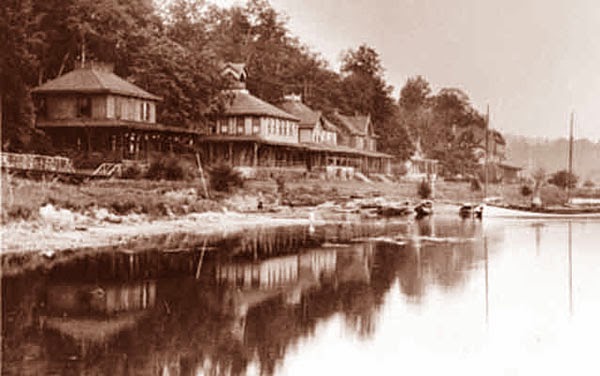 A devastating rainstorm hit the Johnstown area on May 30, 1889; at the time it was the heaviest rainfall ever recorded in that part of the country.  Up to ten inches of rain fell in just 24 hours causing rivers to swell and overflow their banks, threatening Johnstown with severe flooding.  The president of the Club noticed the level of the Lake and the strained condition of the dam.  Warnings were sent to Johnstown but were ignored as there had been many false alarms in the past.

The South Fork Dam collapsed shortly after 3:00pm on May 31st sending the 20 million tons of water from Lake Conemaugh into the valley below.  Within 40 minutes the entire lake was drained.  The flood hit the small town of South Fork first which was on high ground, so the loss of life was minimal.  As the flood continued downstream, it picked up enormous quantities of debris including trees, houses, and animals.  The accumulated debris resulted in the flood being stopped temporarily at a railroad bridge, Conemaugh Viaduct.  But in less than ten minutes the viaduct collapsed and the resulting release of the water and debris produced a much larger and stronger wave as it headed toward Johnstown.  It decimated the towns of Mineral Point, East Conemaugh, and Woodvale and gathered more and more debris including miles of barbed wire from the Gautier Wire Works.

The flood hit Johnstown a little after 4:00pm.  The wall of water and debris was moving at a rate of 40 miles per hour when it hit the town and was as high as 60 feet in places.  The water was stopped when debris piled up against a huge stone railroad bridge which carried the Pennsylvania Railroad across the Conemaugh River.  The debris caught fire and burned for three days.  When the floodwaters finally receded, the pile of debris at the bridge covered 30 acres and reached 70 feet in height.  It took months to clear and dynamite was needed as much of the debris was entangled in barbed wire. 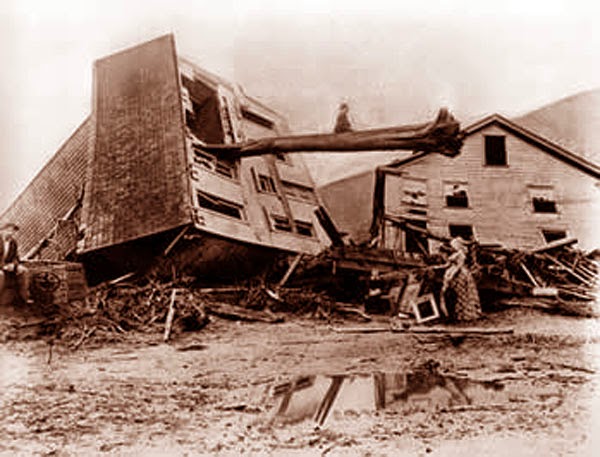 Relief started arriving in the area within a few days when the stone railroad viaduct was repaired and trains were able to come into the area.  The disaster also marked the first major relief effort by the newly formed American Red Cross, led by Clara Barton who remained for more than five months.  Nearly $4 million was received from across the country and around the world, including significant donations from members of the South Fork Fishing and Hunting Club.  Many blamed the Club for not properly maintaining the dam although courts maintained that the disaster was an Act of God, so the Club and its members were never held legally responsible.

Andrew Carnegie built the town a new library; today it is owned by the Johnstown Historical Society which operates it as The Flood Museum.  The Stone Bridge still stands and now forms part of the Johnstown Flood National Memorial, managed by the National Park Service.
Posted by Glessner House Museum at 6:00 AM