Nirvana, A Story of Buddhist Philosophy 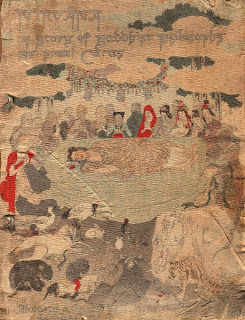 The Glessners’ library contains a wide variety of books on topics ranging from architecture and design to religion and philosophy.  In the latter category is a book entitled Nirvana, A Story of Buddhist Philosophy by Paul Carus.  The story behind the book, including its author and publisher, is fascinating, as is its construction and printing. 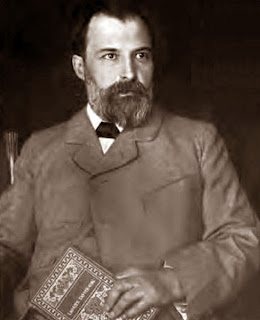 The author of the book, Paul Carus, was born in Ilsenburg, Germany in 1852.  He received an excellent education and obtained his PhD from the university at Tübingen in 1876.  In 1884, he immigrated to the United States, settling in Chicago and then LaSalle, Illinois, where he met and married Mary Hegeler.  He became the first managing editor of the Open Court Publishing Company, founded in 1887 by Edward C. Hegeler, his father-in-law.

Hegeler was the owner of the Matthiessen-Hegeler Zinc Company, at the time the largest producer of zinc in the world.  He founded the publishing company in order to provide an open forum for the discussion of philosophy, science, and religion, and to make the great philosophical classics available by producing affordable editions.  For over 80 years, the company was housed on the ground floor of the 57-room family home in LaSalle, designed in 1874 by W. W. Boyington with interiors by August Fiedler. 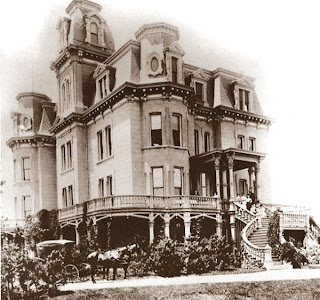 The house, a National Historic Landmark, is now owned and operated by the Hegeler-Carus Foundation and is open to the public for tours and other programming.

In 1894, Carus published The Gospel of Buddha: According to Old Records, a seminal work on Buddhism.   Modeled on the New Testament, it told the story of Buddha through parables, and was an important tool in introducing Buddhism to the Western world.  During his lifetime, Carus published 75 books and 1,500 articles, mostly through Open Court.  Topics included history, politics, philosophy, religion, logic, mathematics, anthropology, science, and social issues of the day.  He also corresponded with many of the greatest minds of the time including Leo Tolstoy, Thomas Edison, Nikola Tesla, Elizabeth Cady Stanton, and Booker T. Washington.  He died in 1919 and is remembered today not only through the Hegeler-Carus Foundation, but also through the Carus Lectures at the American Philosophical Association, and through the Paul Carus Award for Interreligious Understanding presented by the Council for a Parliament of the World’s Religions. 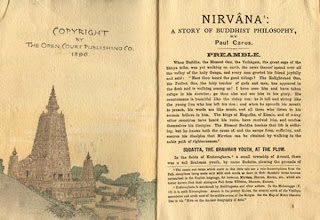 The book in the Glessners’ library, Nirvana, A Story of Buddhist Philosophy, was published in 1896.  It is not surprising that the Glessners would have owned such a book.  Their library reveals that they had a strong interest in religion and philosophy from many parts of the world.  Raised as Presbyterians, they no longer held a membership in any organized church by the time they moved to Prairie Avenue, although maintaining close friendships with such prominent local clergymen as David Swing and Clinton Locke.   They chose to study many of the world’s religions ranging from Swedenborgianism to Buddhism.  As such, this volume is right at home amongst other similar volumes in their expansive library. 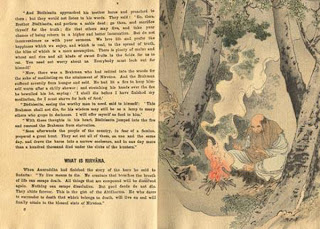 The 46-page book is made of crepe paper with double leaves folded in Japanese style, and is tied together with silk thread.  It was illustrated and printed by T. Hasagawa (Kobunsha) in Tokyo for the Open Court Publishing Company, with Suzuki Kason producing the color woodblock prints. 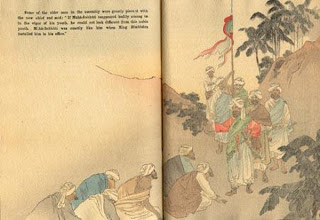 The chapter headings are as follows:
-Preamble
-Sudatta, the Brahman Youth, at the Plow
-The Story of the Hare
-What is Nirvana
-Begging for Alms
-The Wedding
-Anuruddha’s Sermon on Happiness
-The Controversy
-The Katha Upanishad
-The Epidemic
-Copying the Manuscript
-Young Subhuti
-The Blessed One 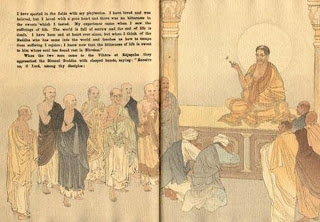 There are several later American editions of the book produced in the early 1900s, but these are not made of crepe paper and do not contain the high quality woodblock images found in the Glessners’ copy.