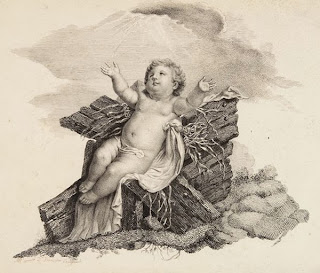 Among the many engravings on display in the museum is one entitled “Gesu Bambino,” the Italian name for the baby Jesus.  As we prepare to celebrate Christmas, we will take a look at the engraving, its artist and dealer, and how it came to be owned by the Glessners.

On November 27, 1880, Frances Glessner noted in her journal:
“French and literature classes in the afternoon.  Mr. Scott over to spend Sunday and look at engravings sent up by Mr. Keppel’s – Roullier.  We selected twenty one pictures.”

Frederick Keppel (1845-1912) appears to have been the exclusive dealer through whom the Glessners purchased their numerous engravings, which numbered nearly 100 by the time of John Glessner’s death in 1936.  Keppel was born in Ireland in 1845, emigrated to Canada, and later moved to New York to become a bookseller.  In 1870, he inadvertently became the first dealer in fine etchings and engravings in North America after acquiring some prints from a disgruntled London print seller who wanted to return to England and needed to dispose of the prints from his New York shop.  Keppel was educated by leading print collectors of the day, including the greatest collector at that time, James L. Claghorn, and was also an intimate friend of James McNeill Whistler.  He travelled regularly to Europe to buy prints and engravings and was the senior member of the art importing firm of Frederick Keppel & Co. with offices in New York and London.  He also lectured widely and wrote regularly for newspapers and magazines.  (Keppel presented the Glessners with a signed reprint of his important article, The Golden Age of Engraving, in 1878).  He died in 1912 at which time his firm donated collections of prints to several museums in his memory to encourage a better understanding of prints and engravings.

Although Keppel did not maintain an office in Chicago, he frequently exhibited here, at the store of Jansen, McClurg & Co., located at the northeast corner of State and Madison.  His representative, Albert Roullier, eventually went into business for himself and established his own store in Chicago around 1900.

An article in the Chicago Tribune dated November 21, 1880 confirms that Keppel was exhibiting in Chicago at the time the Glessners viewed and purchased their twenty one engravings:

“Next week there will be exhibited at Jansen, McClurg & Co.’s, the Keppel collection of the line engravings, composed of specimens of the works of Morghen, Toschi, Longhi, and other masters of the Italian school, the most of them being in the early state, and once the property of Antonio Perfetti, the pupil of Morghen.  Another feature of the exhibition will be the greater portion of the fine engravings which adorned the gallery of ex-Queen Christine of Spain, who died two years ago.  This is particularly rich in specimens of the renowned engravers of the seventeenth and eighteenth centuries – Nanteuil, Edelinck, Massou, Drevet, Willie, Bervic, Strange, and Sharp.” 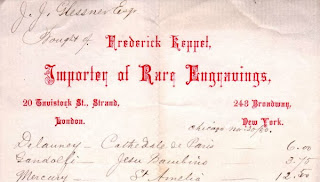 A series of fourteen receipts in the museum archives indicate that the Glessners were purchasing from Keppel as early as 1877 and as late as 1892.  The receipt for their purchase in November 1880 shows that they paid $3.75 for their copy of the Gesu Bambino.  It was the least expensive of the twenty one engravings, for which they paid a total of $596.50.  The receipt also shows pieces by Edelinck and Drevet, possibly those referenced in the Tribune article as being from the collection of Queen Christine of Spain. 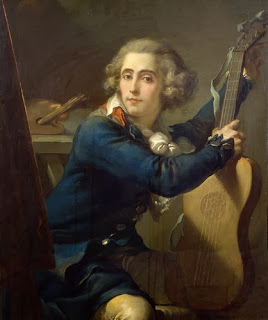 The Gesu Bambino engraving was executed by Mauro Gandolfi, an Italian painter and engraver of the Bolognese school.  Based on an original artwork by Giovanni Zecchi, it shows the baby Jesus lying in a manger with outspread arms and beams of light illuminating from the clouds above.  Born in 1764, Gandolfi came from a family of artists – his father was the painter Gaetano Gandolfi, and his six younger brothers were all painters as well.  In 1794, he was made a professor at the Academy of Fine Arts in Bologna and by the early 1800s he was focusing on engraving.  In 1801, he moved to Paris and engraved the works at the French museums.  He later returned to Italy to continue his work as an engraver.  He traveled to the United States in 1816 and published a series of illustrations depicting New York City and Philadelphia.  Gandolfi died in Bologna in 1834.

The exact date that the engraving in the Glessner collection was made is not known.  John Glessner presented it to his wife as a Christmas gift, and added the penciled notation “With Christmas compliments 1880, J. J. Glessner” in the lower right hand corner. 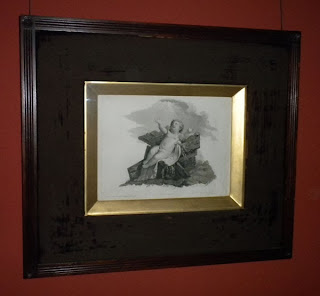 Isaac Scott designed an elegant wood frame for the piece with simple reeded sides featuring small stylized flowers at each corner, each one of different design.  A wide beveled gold leafed inner frame surrounds the print itself; a broader velvet covered mat outside the glass fills the area between the inner and outer frames.

Today the print hangs on the west wall of the hallway leading to Fanny’s bedroom.