The Glessners Venture Across the Atlantic - 1890 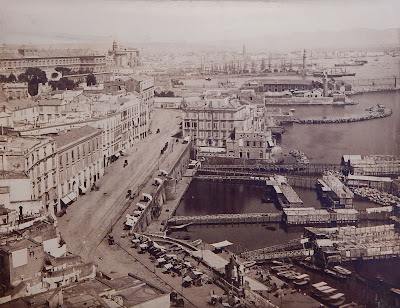 In February of 1890, the Glessner family embarked on their first overseas journey. For the next three months the Chicago aristocrats travelled to Paris and around Italy, Frances Glessner (and occasionally her husband John) recording the details of each day’s outing in her meticulous journal. Somewhere along the way several photograph panels were purchased and made into four rather large albums depicting various European scenes. It is impossible to determine if these photographs of scenery and artwork were taken while the Glessners themselves were present, or whether the family purchased memorabilia of the sites they had seen after their excursions. It is evident however, that a large number of the photos in the albums correlate with the places and artwork the Glessners recorded seeing in the journal, specifically within the cities of Paris, Rome, Naples, and Florence.

Their trip began and ended with time spent in Paris, allowing for thorough exploration of the city and its treasures. John Glessner was immensely fond of the Louvre Museum, visiting several times during his Parisian experience. On the family’s first visit on February 24, Frances Glessner remarked “the Venus [of Milo] is larger than we had expected, & most beautiful from every view.” 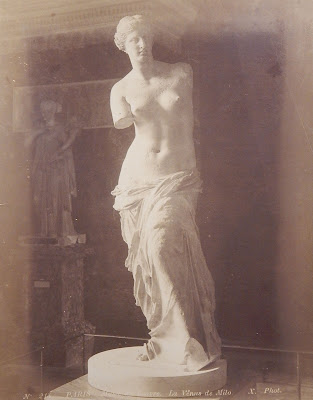 Photo of the Venus de Milo at the Louvre, Paris, France

The Glessners, having always had a great appreciation for the arts, were especially impressed by the famous works of the great masters they were able to view in person. The search for artistic masterpieces continued in Rome at the Vatican Museum and Chapel and in Florence. John Glessner was particularly captivated by the Apollo Belvidere, calling it a “gem” in comparison to other great artistic feats. The works of Michelangelo, Raphael, and Titian (among others) dominate portions of the photo albums and the Glessners’ fine art itinerary.

A sizable number of the photographs were captured by none other than Giorgio Sommer (1834-1914). Sommer was one of the most famous and popular European photographers in the nineteenth century, along with his partner Edmund Behles. Born in modern-day Germany, he began his photographic career in Switzerland but eventually moved to Naples in 1856 where he produced his most famous images. 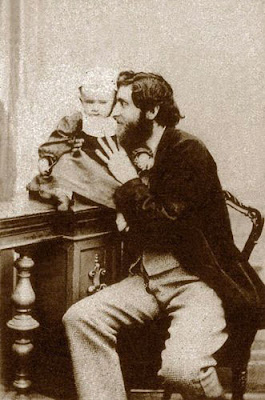 He became known for recording important ruins and artifacts, such as those at Pompeii and within the Vatican and National Archeological Museum at Naples. He even managed to capture the eruption of Mount Vesuvius in April 1872 but this image is not part of the Glessners’ collection.  Unfortunately, there is no record of whether or not the Glessners visited Sommer’s Naples studio, however his fame and popularity would have certainly made him recognizable among the well-to-do American travelers in Europe. 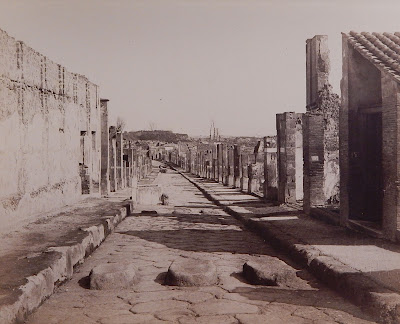 Photo by G. Sommer of the ruins of Pompeii

About 25 of the photos (of which there are over 200 spanning the four total albums) are of the magnificent glaciers and quaint villages found along the Swiss Alps. These were likely taken by Sommer in the early years of his career, before establishing himself in Naples. While the Glessners did not travel to the Alpine region, one of their traveling companions, Violette Scharff (paid companion to their daughter Fanny), rejoined her mother in Lucerne, Switzerland after leaving the family in Paris. Letters between the two mothers detail the affection Frances Glessner held for Miss Scharff and how she must have enjoyed spending time traveling through Italy with the family. At the encouragement of her mother, Miss Scharff extended her stay with the Glessners until after sharing Easter mass with them at the Notre Dame de Paris. She was often referred to as having the superior French among the group and was an asset as well as desirable company.  Having grown quite close to the family throughout their Italian adventure, it is entirely possible that Miss Scharff selected a few of Sommer's photographs of her Swiss destination to share with the family. 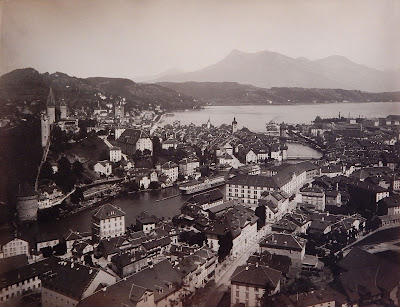 Photo by G. Sommer of Lucerne, Switzerland
The handful of snapshots of London, Bedford and Warwickshire were most likely from R. Burnham Moffat, a young attorney from Brooklyn whom the Glessners befriended during their voyage across the Atlantic (and possibly presented to Fanny Glessner on her 12th birthday celebrated in Rome).  It is also interesting to note the photograph of a sketch of the Blue Grotto of Capri, quite similar to a watercolor print of the same scene Fanny had given to her father as a birthday gift in 1885.

Frances Glessner never mentions collecting photograph panels to create an album nor does she comment on them being a gift or delivery. The accumulation of the photos is unfortunately, mostly speculation. Likely the albums grew over time and various picture collections and gifts were merged to create these four books. However, as these albums came to be assembled they certainly preserved many of the Glessner family’s fond memories of adventure and European travel.

About the Author
Cecilia Ringo is a History and Women, Gender and Sexuality double major at Kalamazoo College in Michigan. She has enjoyed being a collections intern at Glessner House Museum during the Winter of 2018 and hopes to pursue a career in preservation, archival science or museum management. She also recently returned from a study abroad program that allowed her to delight in visiting many of the Glessners’ European destinations.