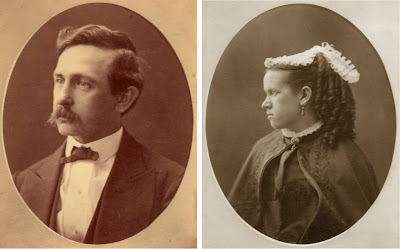 John and Frances Glessner arrived in Chicago in December 1870, just ten months before much of the city was destroyed in the "great conflagration." In this article, we will briefly review their life in Chicago prior to that event, and then share a first-hand account of the fire and its aftermath as recorded by John Glessner.

John Glessner and Frances Macbeth were married on December 7, 1870, in the parlor of the Macbeth house in Springfield, Ohio. On December 15, after a week visiting family, they arrived in Chicago, which they would call home for the remainder of their lives. For their first week in Chicago, the Glessners stayed at the Sherman House, advertised at the time as the “finest hotel in the northwest.” The hotel stood at the northwest corner of Randolph and Clark, directly across from Courthouse Square. (Today, it forms part of the site of the James R. Thompson Center). 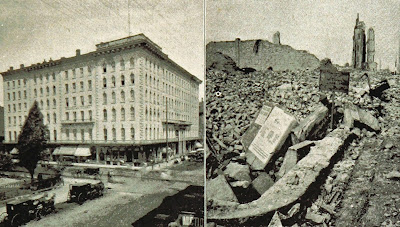 The Sherman House as it appeared before and after the fire

They came to Chicago so that John Glessner could take charge of the local office of Warder, Mitchell & Co. of which he had recently been made junior partner. The office and warehouse were located at the northwest corner of Madison and Canal streets. (The firm later became Warder, Bushnell & Glessner, and ultimately merged with four others in 1902 to become International Harvester).

On December 28, exactly three weeks after their wedding, the Glessners moved into their first home, located on the west side, which they rented for $45 per month. Of the house, John Glessner wrote, “We rented the house at 69 Park Avenue, corner of Page Street, two blocks west of Union Park – a nice, comfortable two-story frame house that had been built by Judge McAllister and never lived in by anyone except his family. Here we were quite happy, Frances was an excellent housekeeper, our furnishings were all new and selected by her, and the house under her ministration was very charming.” (The house is long gone. Park Avenue later became Maypole Avenue and is one block south of Lake Street. Page Street, which was two blocks west of Ashland Avenue, became Hermitage Avenue). 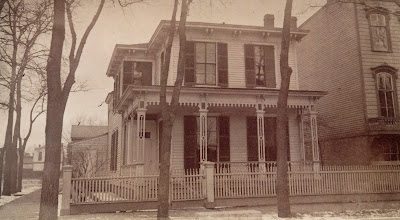 The Glessners’ first child, a son whom they named George Macbeth Glessner, was born at home on October 2, 1871, just six days before the start of the Great Chicago Fire. His mother was confined to bed for nearly two weeks following childbirth. 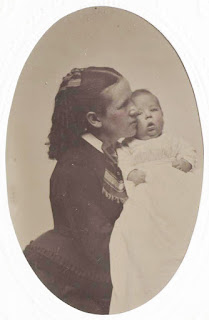 On Saturday, October 7, the night before the Great Fire, another serious fire destroyed nearly four blocks bounded by Adams Street on the north, the Chicago River on the east, Van Buren Street on the south, and Clinton Street on the west. The northern edge of this fire was just two blocks from Glessner’s office and warehouse, a deeply concerning fact for John Glessner until it was finally brought under control in the early hours of October 8. In an ironic twist of fate, that fire ensured the survival of Glessner’s office during the Chicago Fire, as the leveled blocks served as a firebreak and prevented the fire from spreading north on the west side of the Chicago River. 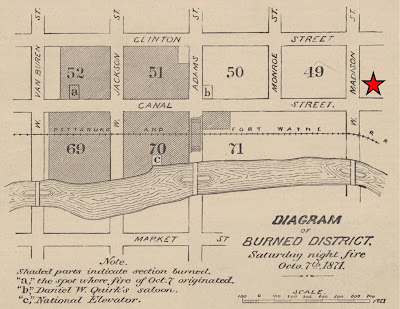 Map showing area burned in the October 7 fire; the red star marks the site of John Glessner's office (North is at right) 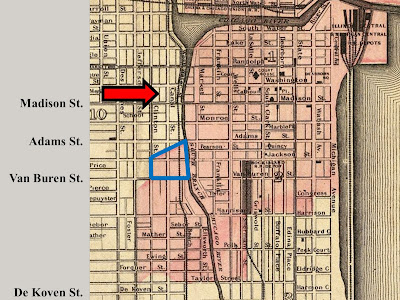 Pink area shows area burned in the Great Chicago Fire; the area burned on October 7 is bordered in blue; the location of John Glessner's office is shown with the red arrow

The Great Chicago Fire began on Sunday, October 8 at about 8:30pm in the O’Leary barn on De Koven Street. It quickly spread north toward the business district, fanned by strong winds which became superheated and blew debris long distances. Lumber yards, warehouses, coal yards, and wooden bridges were quickly consumed until the fire had come close to Glessner’s office. He wrote:

“The watchman from my office and warehouse, faithful Dick Cunningham, came that Sunday evening to say I ought to go down to look after things, as the fire was but half a block away. Of course, I went, and staid there or nearby until morning. I crossed the river and stood at the corner of Madison and Market Streets – that very wide street (now Wacker Drive) – and saw the blaze blown across the river, strike the west wall of a large brick building on opposite corner, suck down that wall and back along the roadway to my feet, so that I had to get away.

“It is impossible to express the grandeur of the scene, and the horror. Had there been plenty, no amount of water could have extinguished that blaze. Fanned by a strong southwest wind, it swept over the whole business section, crossed the main branch of the river, and burned the North Side, factories, residences, water works, and everything. Fortunately, the fire did not come nearer than the half block to my building, and my home was a mile and a half away. When I got home in the morning, I found Frances had been sleeping quietly and had not missed me.” 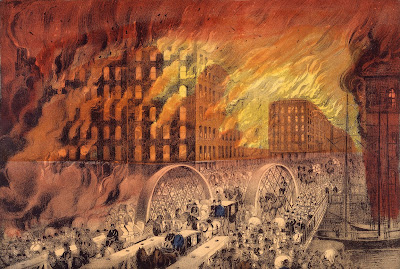 Looking northeast across the Randolph Street bridge; this was two blocks north of John Glessner's office 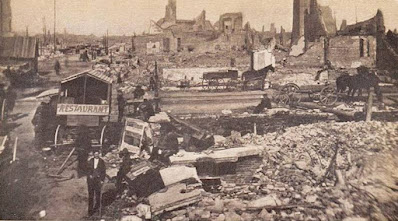 Even before the fire burnt itself out on October 10, plans were already underway to provide relief for the nearly 90,000 people left homeless (28% of the population). John Glessner continues:

“I was too new in Chicago to have much part in the relief measures but did what I could. Christie Holloway came, conveying a carload of provisions from Springfield (Ohio), and he stopped at my house; and other friends and acquaintances came, bringing supplies of various kinds, and stopped with me, for there were no hotels standing.

“My friends in Ohio and elsewhere sent contributions to me to turn over to proper authorities and showed great confidence in me. One man whom I never had seen sent me $500.00 to distribute where I thought best, without any restrictions. I went to five different preachers and offered each one hundred dollars to help members of their congregations who might be in need and too proud to ask aid. And only one of these responded generously. The others each wanted two hundred or three hundred dollars, and so on, but Rev. Dr. Parkhurst, Methodist, said, ‘Mr. Glessner, there are members of my church who are in need, but they don’t need help as badly as some others, and I would recommend you to see . . .” – so and so of other churches.” 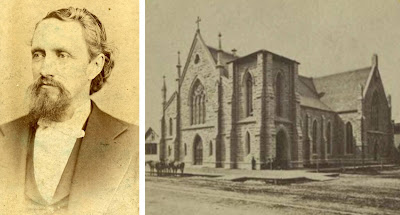 The ministers to whom the donations were made were Rev. Arthur Mitchell (First Presbyterian), Rev. Abbott E. Kittredge (Third Presbyterian – where Frances Glessner was a member), Rev. Matthew Parkhurst (Grace Methodist), and Revs. Hartman and Anderson (churches unknown). Regarding the clergy, John Glessner also noted that “Our Presbyterians preached that the Chicago fire was punishment by the Lord for our wickedness, but when the Boston fire came soon after, it was ‘Whom the Lord loveth he chasteneth.’”

An immediate concern for everyone was the lack of water, due to the destruction of the water works. Residents could have water hauled from the lake at a cost of $2 to $5 per barrel, but the Glessners were luckier than most:

“Of course, everybody was without water and when the maid came to me to say she could get none from the tap and it was washday morning, she not knowing the extent of the fire, I went to the kitchen, and upon examination found a large cistern full of beautiful clear water that we used for everything except drinking.”

Glessner’s business would be quiet until spring. He was in the process of having a new warehouse built at the southeast corner of Lake and Clinton streets, so moved his stock of machinery into the stable behind his house and gave his warehouse at Madison and Canal to his friends Albert and Otho Sprague, partners in the firm of Sprague, Warner & Company. From that site, the firm was able to restart their wholesale grocery business, which at the time was the largest of its kind in Chicago.

Surprisingly, Frances Glessner remained totally unaware of the fire and the comings and goings of visitors in her home, due to her confinement following the birth of George. John Glessner noted that “We kept from Frances all knowledge of these visitors and of the fearful tragedy of the fire for ten days or two weeks. The first time I could take her out, we drove down through the burned district. It was a dismal sight.” 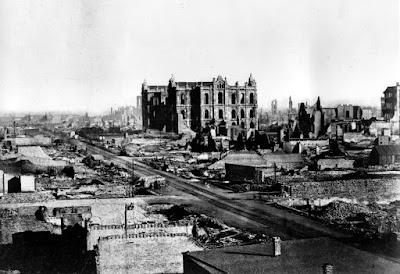 The burnt district looking southeast across Randolph toward the courthouse ruins. The Sherman House, where the Glessners spent their first week in Chicago, would have stood at extreme left across from Courthouse Square.

In the end, the Glessners fared the tragedy far better than many others in the city. Home and business were spared, and they were able to focus on their new role of parents, while aiding the sufferers as they could. John Glessner closed his account of the fire with these words:

“The fire came close to but had not damaged any of my property. Our business was entirely out of the city, so that no sufferer owed us anything, and aside from our bank balance being tied up for thirty days we lost not a dollar, and I felt almost mortified because of our good fortune in the general distress.”