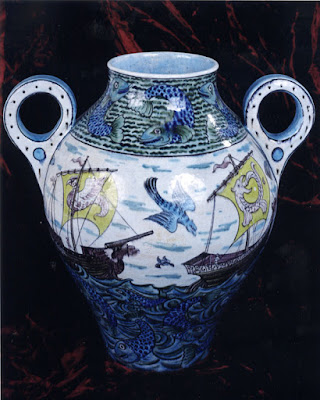 One of the most beautiful and striking objects in the museum collection is a robust and colorful vase displayed on the music cabinet in the northwest corner of the parlor.  The piece is the work of one of the late 19th century’s most innovative ceramic artists, William Frend De Morgan (1839-1917).  The large vase, nearly 16 inches tall, features circular lug handles set against a bulbous baluster-shaped body.  Masted Medieval vessels under full sail navigate seas filled with jumping fish in green, blue, turquoise, and yellow.  An ouroboros, a mythological serpent-like creature who symbolizes the cycle of life by eating its own tail, decorates one of the sails on the ship.  (Interestingly, the same creature can also be found in the carved ornamentation on the front of the house).

De Morgan was born in London and enrolled in art at the Academy Schools in 1859.  Three years later, he met William Morris, and abandoned painting to join Morris’ team of designers.  He executed numerous glass and tiles designs, and painted panels for furniture designed by his associate Philip Webb.  While working on stained glass, De Morgan discovered that silver pigments caused an iridescent surface on the glass.  His subsequent experiments on tiles to reproduce this effect resulted in the first luster tiles being produced in 1870.  In 1872 he opened a pottery works and over the next decade produced some of his finest work, including many pieces based on traditional thirteenth century Islamic pottery from Turkey, Persia, and Syria.  His “Persian colours,” as these ceramics came to be known, became the hallmark of his work and the fashion throughout Victorian England.

This vase was most likely produced in De Morgan’s ceramic works in Sand’s End, London, and would have been purchased by the Glessners about 1890.  Large vases such as this were the most expensive pieces produced, and  were painted by De Morgan himself, or under his close supervision.

The Glessners owned a number of other pieces by DeMorgan including tiles which decorated the fireplaces in the master bedroom and courtyard bedroom.
Posted by Glessner House Museum at 9:46 PM