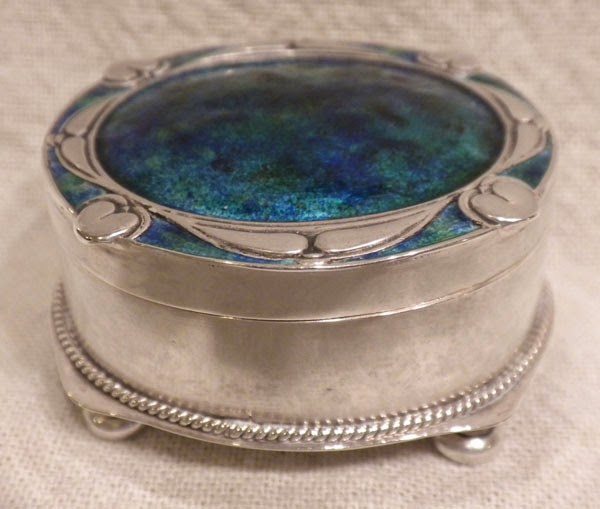 One of the loveliest decorative objects in the museum collection is a diminutive oval trinket box.  Recently placed on display on the dresser in the newly opened corner guestroom, the silver and enamel piece is the work of William Hair Haseler, a prominent English silversmith of the late 19th and early 20th centuries.

William Hair Haseler was born to John and Sarah Evett (Hair) Haseler in 1821/1822 in Birmingham, England.  He married Elizabeth Rabone in 1851 and together they had six children.  In 1870, Haseler founded the company, W. H. Haseler & Co., specializing in gold and silver work, and jewelry.

Five years later, Arthur Lasenby Liberty (1843-1917) started a small shop on the corner of Regent Street in London.  Specializing in exotic goods from Japan and the Far East, his business thrived and he became a leading merchant to the upper classes, including famous members of the Pre-Raphaelite movement.  The store soon became the most fashionable place to shop in London, featuring luxurious wares including fabrics, clothing, furniture, clocks, jewelry, wallpapers and decorative objects of all kinds.  His efforts to promote the Art Nouveau style, with its depiction of leaves and flowers in flowing ornamental lines, were so influential that the term “Stile Liberty” became the accepted term for the style in Italy.

During the 1890s, Liberty formed relationships with many leading English designers.  In 1898, Liberty and Haseler created a formal partnership to launch the Cymric silver line under the title “Liberty and Co. (Cymric) Ltd.” using free lance designers.  One of those designers, Archibald Knox (1864-1933), began designing for Liberty in 1899.  He focused on the new Celtic design work for the Cymric range and its pewter counterpart, known as Tudric.  Haseler was responsible for making many of Knox’s designs.  Knox was a highly gifted designer and is largely credited with the success of Cymric silverware.  He continued to design for Liberty until 1912. 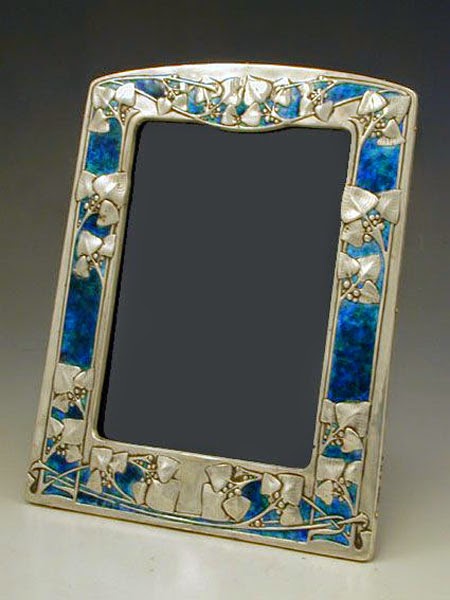 William Hair Haseler died in December 1909 in Shropshire, but his company continued in partnership with Liberty until 1926.  Haseler pieces can be found in the collections of the Victoria and Albert Museum in London, as well as many other museums throughout England.

The trinket box in the Glessner collection measures just 2-1/4 inches in width and 1 inch in height.  Delicate wire work trim encircles the base which sits upon four bun feet.  The removable lid features blue and green enamel work with four silver hearts (or heart-shaped leaves) set into the surrounding stylized border.

Several marks are stamped onto the underside of the piece, as shown above.  The “W.H.H.” is the maker’s mark for William Hair Haseler.  The anchor is the city mark for the city of Birmingham, England.  The next mark, known as the lion passant, is the assayer’s mark indicating that the piece meets the standards to be considered sterling.  The next mark, a lowercase “h” is the date mark indicating the piece was made in 1907.  One additional mark, not shown above, reads “930” and refers to the purity of the silver.  This number indicates the amount of pure silver in parts per thousand – 930/1000 – or 93% pure silver.

Although small and easily overlooked, this beautiful box exhibits both the Glessners’ sophisticated tastes and Frances Glessner’s interest in silver during this period when she was making her own pieces.
Posted by Glessner House Museum at 6:00 AM