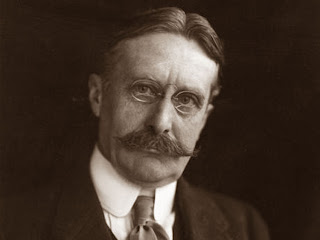 On March 31, 2013 the new Masterpiece Classic drama “Mr. Selfridge” premiered on Channel 11 WTTW in Chicago.  Episode one opened with Harry Gordon Selfridge, the legendary department store owner and innovator, planning for the construction of his huge store at the “unfashionable” end of Oxford Street in London, which opened on March 15, 1909.  But before Selfridge came onto the scene in London, he spent over 25 years in Chicago honing his skills and making his first fortune.

Harry Gordon Selfridge was born in Ripon, Wisconsin in 1858.  His childhood was filled with tragedy – his two brothers both died while quite young, and his father went off to the Civil War and never returned to the family, leaving young Harry and his mother Lois (Baxter) Selfridge alone to care for each other.   In 1879, Selfridge came to Chicago to take a position with Field, Leiter & Co., working his way up in the company until becoming a director of Marshall Field & Co. and manager of the retail store. 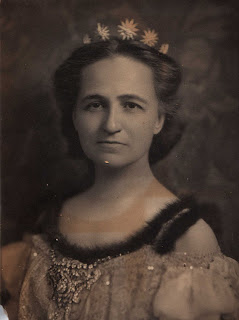 On November 11, 1890, Selfridge was married to Rosalie “Rose” Buckingham.  His bride was a cousin of the Ebenezer Buckingham family which resided at 2036 S. Prairie Avenue.  Two of Ebenezer’s children, Kate and Clarence, were among the bridesmaids and ushers at the ceremony.  (Kate Buckingham is best remembered today for funding the fountain in Grant Park as a memorial to her brother Clarence).  The 4:00pm ceremony was held at Central Church, with Rev. David Swing officiating.  Following the service, the bride’s sister Anna Buckingham Chandler and her husband Frank hosted an elaborate wedding supper in the ballroom of their home at 182 (now 744 N.) Rush Street.  The guest list featured many leading members of Chicago society including John and Frances Glessner; however, a look at Mrs. Glessner’s journal reveals that they were unable to attend:

“Tuesday I went to the office of the Visiting Nurse Association where I staid from eleven till two o’clock.  The nurses reported to me.  I gave them money for carfare, they took out stores, etc.  I rushed home for luncheon.  Elsie Leslie and her sister Miss Lyde were here to luncheon.   I sent these two, Fanny, Miss Scharff and Mrs. Elliott to Rose Buckingham’s wedding at Central Music Hall – they all enjoyed it very much.  I couldn’t go for several ladies called.  I couldn’t go either to the reception.”  (Mrs. Elliott was the author Maud Howe Elliott, a daughter of Julia Ward Howe, and wife of the English artist John Elliott).

In 1891, the Selfridges welcomed their first child, a son Chandler, but he died soon after.  The Selfridges and Chandlers were already spending their summers at Lake Geneva at this time, so the little boy’s body was interred at Oak Hill Cemetery in that town.  Two years later, the Chandlers purchased the building constructed by the government of Ceylon for the World’s Columbian Exposition, and had it disassembled and rebuilt on the Lake.  It became known as Ceylon Court. 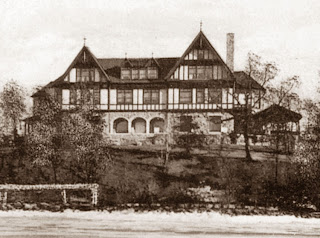 A few years later, the Selfridges purchased the adjoining property and began construction on their summer home Harrose Hall (shown above), which was completed in 1899.  (The name is a combination of the names Harry and Rose.  Selfridge retained ownership of the property until 1922, but it was rarely used after he moved to England in 1906.  It was sold to another family and demolished in 1975).

In Chicago, the Chandlers and Selfridges lived together in the house on Rush Street until 1898, when the Selfridges purchased a city house at 117 Lake Shore Drive (later 1430 N. Lake Shore Drive, shown below).  The house had been designed in 1890 by architect Francis Whitehouse for his widowed mother-in-law Barbara Armour, who relocated here from her long-time South Side residence at 1945 S. Prairie Avenue.   Mrs. Armour had died early in 1898, and the Selfridges purchased the house for $100,000. 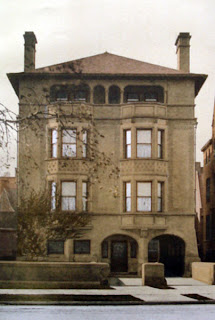 In early 1904, Selfridge decided to strike out on his own, and he sold out his interest and resigned from Marshall Field & Co.  Soon after, in conjunction with several other business partners, he purchased the firm of Schlesinger & Mayer (including their famous store designed by Louis H. Sullivan), changing the name to H. G. Selfridge & Co.  However, before the year had ended, he sold the store to Carson, Pirie, Scott & Co., making a sizeable profit in the deal.   By 1906, Selfridge had set his sights on London, and it is at that point in time that the series “Mr. Selfridge” begins.

Daughter Rosalie sent the following letter, dated November 11, 1913, to Frances Glessner while Rosalie and her mother were in Chicago:
"My dear Mrs. Glessner:- It was so dear and kind of you to think of me on my debut and to send me such a lovely and lasting reminder.  The beautiful little ring will always recall one of my mother's dear friends, and add another link to the many ones which bind us to Chicago.  I hope I may drop in to see you, one day before we leave, and that we may also have the pleasure of welcoming you some day in London.  Appreciatively yours, Rosalie Selfridge"
Posted by Glessner House Museum at 3:24 PM