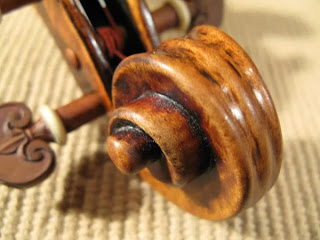 On November 3rd and 4th, the Borromeo String Quartet visited the Chicago area to perform two concerts.  Of particular interest is the violin used by Nicholas Kitchen, first violinist of the Quartet - an extraordinary Guarneri del Gesu made in 1730 and known as the “Baron Vitta.”  From 1929 until 1958, that instrument was owned by Frances Glessner Lee.  This article will focus on that chapter in the long history of this celebrated instrument. 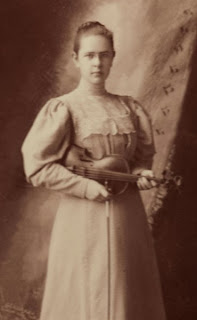 As a teen, Frances “Fanny” Glessner played the violin, as did her brother George.  A violin on display atop the piano in the parlor of the Glessner House Museum recalls this fact.  Although there is no evidence she played in later years, music was always a central part of her life, and she continued the extraordinary support of the Chicago Symphony Orchestra that her parents began at the time of its founding in 1891. 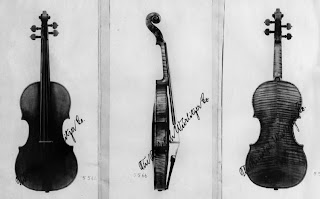 In early 1929, Frances Glessner Lee purchased the Baron Vitta violin from the Rudolph Wurlitzer Company of New York, dealers in rare old violins founded in 1856.  She paid $30,000 for the instrument and although the motivation that led to the purchase is not documented, she immediately entered into an agreement to loan it to Remo Bolognini, assistant concertmaster of the Chicago Symphony Orchestra. 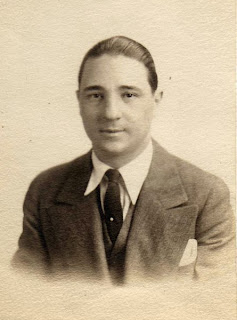 Bolognini, born in Buenos Aires, Argentina in 1898, is generally regarded as South America’s greatest violinist.  He began the study of the violin at the age of seven, and his first recital six years later made him well known throughout the continent.  After performing for three years with his brother Astor and Alberto Castellano at the Palace Theatre in Buenos Aires, he accepted the position of concertmaster of the Philharmonic Orchestra in that city.  In 1927 he came to the United States to assume the position of assistant concertmaster with the Chicago Symphony Orchestra under Frederick Stock.  After the conclusion of the 1928-1929 season, he left the orchestra and traveled to Europe where he studied under the Belgian violinist Eugene Ysaye and concertized extensively.  At one of those concerts he was heard by Arturo Toscanini, who engaged him to be the second concertmaster with his orchestra, the NBC Symphony Orchestra, formed in 1937.  He remained with that orchestra until 1954 when he became the assistant concertmaster with the Baltimore Symphony.  He died in 1977.

In 1939, Frances Glessner Lee requested that the violin be returned to her, and after an unsuccessful attempt to sell the instrument, she loaned it later that year to the Chicago Symphony Orchestra, which gave it to their concertmaster, John Weicher, for his exclusive use.  The violin attracted a great deal of attention in the media, one article referring to it as “one of the most valuable in the world.” 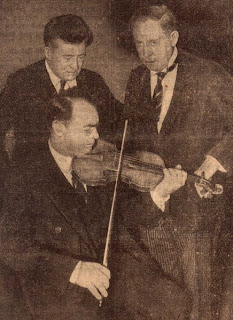 John Weicher, Jr. was born in Chicago in 1904 and was the son of a violinist from Bohemia, who immigrated to Chicago in 1893.  In 1912, the father took his eight-year-old son to Prague where he spent four years studying at the conservatory.  They were forced to return to Chicago in 1916 due to the World War and in 1919, Weicher joined the Chicago Civic Orchestra, the CSO training orchestra, during its inaugural season.  During the 1920s he played with the Cleveland and Seattle orchestras and returned to Europe for further studies.  In 1929, he took over for Bolognini as assistant concertmaster with the Chicago Symphony Orchestra, and was elevated to concertmaster in 1937.  He remained in that position for 23 seasons, 1937-1959 and again in 1962-1963, serving as principal second violin from 1959-1962 and again from 1963-1969.  He died in July 1969 at the age of 65. 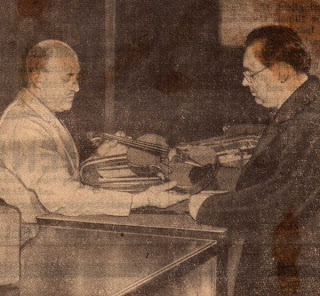 An amusing anecdote in the history of the instrument took place in March 1940, when John Weicher attempted to pawn the instrument to several pawnbrokers in Chicago.  Weicher bet that pawnbrokers would recognize the violin was of great value; his friend Pence James, a reporter with the Chicago Daily News, said no.  Weicher took the violin to four pawn shops asking for a $100 loan, but three of the four didn’t recognize its value, one pawnbroker stating “A hundred dollars? I can’t give you that kind of money for a fiddle like this.”  The fourth pawnbroker did recognize that the violin had great value, but was suspicious of the whole transaction, thinking it was a gag.  An article about the incident was published in the Chicago Daily News on March 6, 1940. 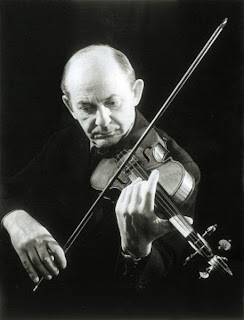 The violin was returned to Frances Glessner Lee in 1949 at which time she consigned it for sale with Rembert Wurlitzer in New York.  The instrument was finally sold in 1958 to Szymon Goldberg for $15,000.  Goldberg (1909-1993) was a distinguished Polish-born American violinist and conductor, and founder and long-time conductor of the Netherlands Chamber Orchestra in Amsterdam.  He taught at Yale, Juilliard, the Curtis Institute and elsewhere and one of his young students was Nicholas Kitchen, first violinist with the Borromeo String Quartet, who now plays his teacher’s violin. 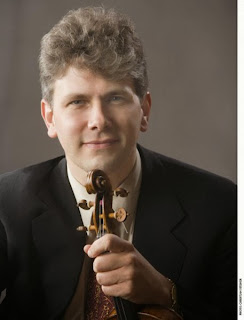 For more information on Goldberg and Kitchen and their history with the instrument, see the online article published November 5, 2013 by WFMT entitled “Music Outsourced Brings Wonders.”  To hear Kitchen’s 2009 performance of Bach on the instrument, click here.
Posted by Glessner House Museum at 12:56 PM