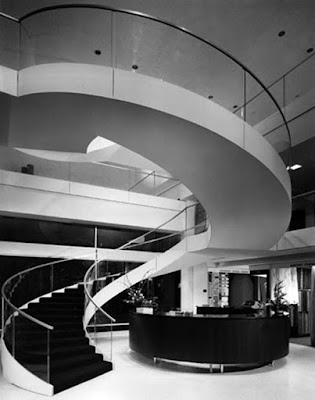 Glessner House Museum celebrated its 50th anniversary on April 16, 2016 with an event entitled “Peace, Love and Preservation.”  As part of the event, an exhibit was unveiled showcasing the year 1966, with topics ranging from movies and television to architecture and preservation.  In this article, the first of several to focus on our founding year, we will showcase five of the buildings which received Distinguished Building Awards from the Chicago Chapter American Institute of Architects.

A total of nine building projects received awards in 1966, including the Jacobus residence by Ralph Anderson and a Glencoe residence designed by Erickson and Stevens, the latter of which received the top honor award.   The firm of McPherson, Warner and Brejcha was recognized for its design of the Flossmoor Public Library, and M. K. Young and Associates received an award for its design of the Oakbrook School. 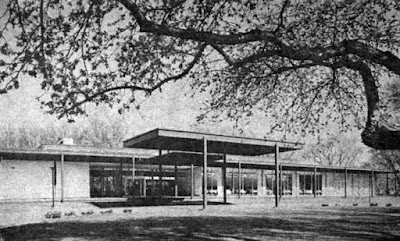 The Old Orchard Country Club in Mount Prospect was designed by the firm of Alper and Alper.  In the February 1966 issue of Golfdom, architect Zalman Y. Alper discussed the design of the club, as well as designing clubs in general.  Regarding the design of clubhouses, Alper noted:

“There are three significant aspects of the architectural design of a clubhouse: function, spatial organization, and the visual aesthetic. . . The visual aesthetic of the clubhouse is an area in which some strange and often ludicrous decisions have been made.  In the past, for various reasons, clubhouses were designed to give the superficial appearance of manor houses and chateaux.  Fortunately this has begun to change and here and there one can see really elegant clubhouses using contemporary materials and designed with reference to site and need – instead of being poor imitations of Elizabethan buildings which even in the original weren’t very comfortable.”

Alper also noted the importance of fire resistance construction, since golf courses are usually located “in areas which are far removed from adequate fire protection.”  He encouraged the use of sprinklers and other “on-the-spot firefighting equipment.”  This made perfect sense, considering the commission for the new club house came about after the previous clubhouse had been completely destroyed by fire.

The new clubhouse was designed with an independent steel frame with huge panes of glass set in aluminum frames amongst walls of common brick painted white.   Careful attention was given to the interior plan, taking into account function and usage during both peak and off-peak hours.  Alper closed his article by noting:

“The architect can make a significant contribution not only in providing an aesthetic environment but in planning for efficient utilization of space.” 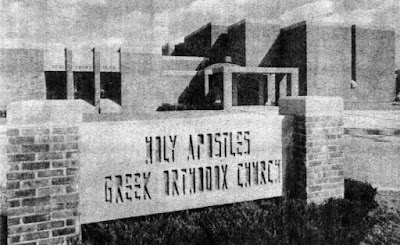 The construction of this church on Wolf Road in Westchester reflected the growing population in the western suburbs of Chicago.  In 1961, the parish, consisting of 280 families, purchased a five acre tract of land and immediately began planning their new building.  Ground was broken in May 1964 and the “Opening of the Doors” was celebrated on June 27, 1965. 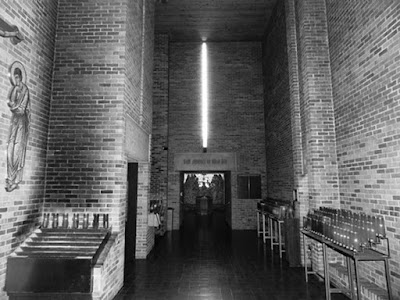 The architect of the building was Edward D. Dart of the firm Loebl, Schlossman, Bennett and Dart.  Classified as Neo-Byzantine in style, the church incorporated traditional forms within a modern interpretation.  As noted in the parish history:

“Mr. Dart accomplished this by extensive study, research, and travel throughout Greece and the Middle East.  The primary use of just three basic materials (concrete, brick and wood) resulted in an impressive and distinctive church building.”

The interior was decorated with significant mosaic icons designed by Sirio Tonelli. 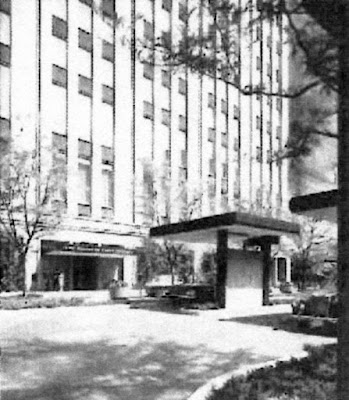 The first drive-up bank window was installed in 1928 for the City Center Bank in Kansas City; however drive-in banking remained a rarity until the 1960s.  C. F. Murphy Associates designed the facilities for Northern Trust Company and the AIA noted:

“In an era of fast food chains and shopping malls, another example of the Automobile’s impact on the built environment.” 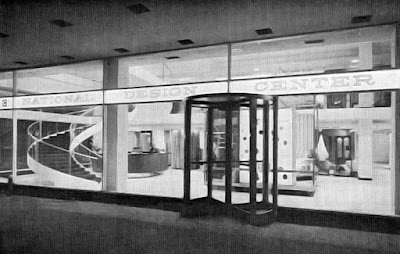 The National Design Center was a New York-based company that offered decorators and the general public the opportunity to view a huge array of home furnishings and appliances.  Several buildings in Chicago competed for the Center, which was awarded to the Marina Management Corporation, builders of Marina City, in 1962.  The Center leased 35,000 square feet of space on the first four floors of the Marina City office building.  The architectural firm of Brenner Danforth Rockwell was awarded the commission and a $1.5 million budget to design the interior.

The Center premiered in March 1964 and was open seven days a week.  Exhibits occupied the first three floors and included not only furnishings and appliances, but fabrics, decorative items, and building products as well.  Since nothing could actually be purchased on site, an information counter, staffed by 12 people, provided information on where products could be purchased and how much they cost.  The fourth floor was occupied by a large auditorium for lectures, meetings and concerts.  A bookshop was later added to the main floor. 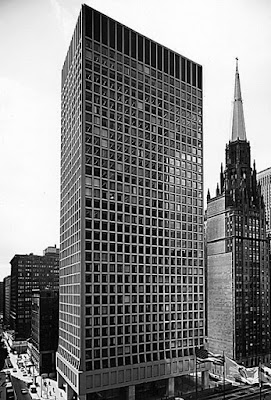 The only downtown skyscraper to receive an award in 1966 was the Brunswick Building designed by Skidmore, Owings and Merrill at 69 W. Washington Street.  The building was significant both for the individuals who worked on the project as well as its construction.  As noted on the SOM website:

“The Brunswick Building represents an early collaboration between three men synonymous with Chicago’s skyline: Myron Goldsmith, Bruce Graham, and Fazlur Khan.  The Brunswick utilizes a tube-with-a-tube structural system.  Rigid, hollow tubes make up the core and perimeter, bracing the building and allowing column-free interiors.  Variations of this system would later give rise to the John Hancock Center and Sears Tower.”

Carl Condit, in his volume Chicago 1930-1970: Building, Planning and Urban Technology, also noted that the Brunswick was “the highest structure with a load-bearing wall erected up to the time of its completion.”  The AIA Guide to Chicago notes another innovation in the building, “To provide a visually open base, a massive ring girder (behind the thick windowless line at the second floor) transfers and distributes the weight of over five dozen vertical members to the perimeter first-floor columns.”

The building serves as the Cook County Administration Building.

Note:  George Danforth and Carl Condit were founders of Glessner House, and Dan Brenner joined in during the first year.  C. F. Murphy and Associates and Skidmore, Owings and Merrill each contributed $5,000 toward the $35,000 purchase price of the house.