The Beidler Room - A renovation and a little history 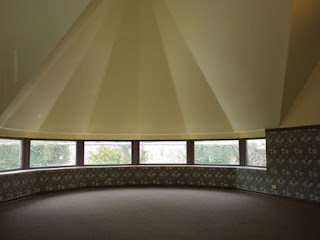 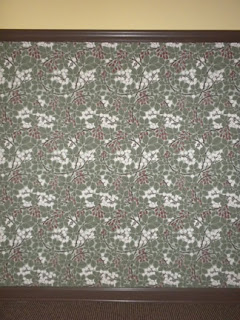 Earlier this month, the museum completed a long-awaited renovation of the smaller meeting and programming space known as the Beidler Room.  This space has an interesting history, both during the time of the Glessners and in more recent years.
HISTORY
When the house was completed in 1887, this room was designed as five smaller spaces.  The most prominent of these was a spacious conservatory for Frances Glessner, with large panes of glass extending up to the peak of the ceiling, bathing the room in sunlight.  So much sunlight, in fact, that the Glessners had to replace the glass with a translucent variety to prevent the plants from burning.  Conservatories were popular in large homes of the period, and since the Glessners spent their summers at their estate in , this permitted Frances Glessner to have flowers and plants year-round in their “winter home.”
Two large walk-in closets provided storage for family and staff linens and a smaller closet was lined in cedar.  A corridor connected all of these rooms.
CONVERSION TO THE BEIDLER
In 1974, these spaces were gutted and combined to form a large conference room.  Well-known architect Thomas Beeby created the new modern design for the space, which highlighted the dramatic ceiling line of the old conservatory.  The renovation was recognized with the “Distinguished Building Award” from the American Institute of Architects in 1976 for Excellence in Architecture, Interior Remodeling.
The remodeling reflected the prevailing tastes of the 1970s, but over time the design began to feel dated, and certainly was at odds with the overall character of the rest of the house.  In early 2011, the room was painted, using a light yellow color that was original to the adjacent hallways, and papered with a William Morris-inspired design created by Bruce Bradbury.  The finished room is one that honors the Arts and Crafts tradition of the house, and provides a warm and inviting setting for lectures, programs, and meetings. 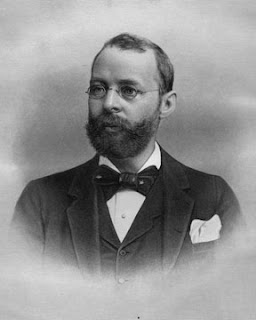 FRANCIS BEIDLER
The creation of the conference room was funded by the Francis Beidler Foundation, which has provided ongoing support to the museum for nearly forty years.  Francis Beidler was born in in 1845, and was a member of a pioneering family that helped to establish as a center of the lumber industry.  At his death in 1924, he bequeathed $1,500,000 for charitable and patriotic purposes, which today is administered by the foundation that bears his name.
There is an interesting connection between the Beidler and Glessner families.  In 1874, John and Frances Glessner purchased their home at the northeast corner of Washington and Morgan from Francis Beidler’s father Jacob.  They remained in this home until moving to Prairie Avenue in December 1887.
Posted by Glessner House Museum at 2:57 PM