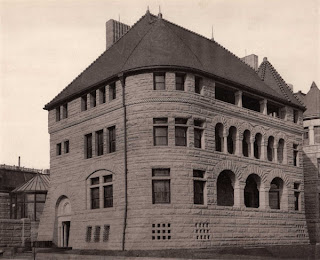 The museum staff is busy preparing a new permanent exhibit on the life and work of Henry Hobson Richardson, architect of Glessner house.  The exhibit is being written by noted scholar, Professor James F. O’Gorman, and will be installed in the tour center, giving visitors an opportunity to learn more about the man often referred to as the first great American architect.  The unveiling will take place on , the official start of the 18-month celebration commemorating the 125th anniversary of the building of Glessner house.
The Glessner house is one of two residential designs completed in .  The other, the home of Franklin and Emily MacVeagh, stood at 1400 N. Lake Shore Drive, immediately north of the Potter Palmer “castle.”  Completed at the same time as the Glessner house, it was demolished in 1922 for a high-rise apartment building. 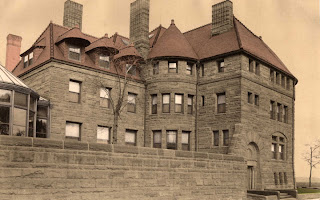 The MacVeagh house stood three stories high on a battered basement.  Its stalwart main block facing the drive featured two unmatched corner towers flanking a balanced central portion with loggias that opened onto the lake on all floors.  All of the elevations were finished in a creamy rough-cut sandstone known as Buff Amherst.  The blocks were put up in alternating wide and narrow courses and were virtually devoid of carved ornamentation.  In the fashion of ’s later designs, the walls were carried seamlessly around corners, as if it were possible to stretch a stone skin over a frame.  A steeply pitched red tile roof was set down cap-like above the walls.
Interior spaces were lavishly outfitted.  The library walls were lined in antique French tapestries, the dining room, decorated in an Italian fashion, opened into a conservatory through marble arches, and in 1893, the third floor was finished as a music room with walls painted in the manner of .  The Chicago Tribune labeled its stout stone facades and lavish interiors “luxurious imprisonment.” 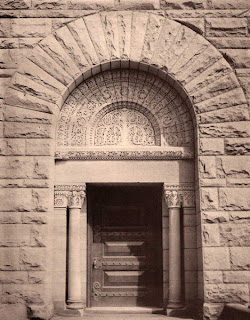 When the house was demolished in 1922, efforts were made to remove and preserve the elaborately carved entryway for installation at another site.  Although contemporary accounts indicate that the entryway may well have been salvaged, whatever became of the fragments is unknown, and they were presumably lost over time.
(Architectural historian Mary Alice Molloy contributed to this article)
Posted by Glessner House Museum at 11:50 AM