Music in the Mansion, Part 1: The Glessners' Piano 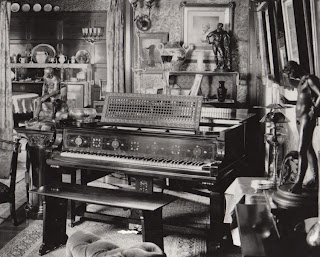 On Sunday April 17, the museum will present “Music in the Mansion,” the first in an occasional series of concerts in the Glessner parlor.  The setting is most appropriate, for John and Frances Glessner were both deeply involved with classical music in , most specifically as major supporters of the Chicago Symphony Orchestra.  In this article, we look first at the Glessners’ piano.  Next week, we examine their role in the development and support of the orchestra.
The magnificent grand piano in the parlor is the result of a collaboration between renowned piano maker Steinway & Sons and furniture designer Francis H. Bacon.  The piano was ordered in May 1887 while the Glessners were visiting New York.  Nahum Stetson, Chief of Sales for Steinway, personally supervised the production of the piano, and the mechanics were “the best they could produce” according to John Glessner.
The piano is an early example of Steinway’s Model C Parlor Concert Grand Piano, the second largest of Steinway’s seven grand piano models.  At 7 feet 5 inches, it is only a few inches shorter than a concert grand piano.  When the instrument was finished in August, it was delivered to A. H. Davenport and Company in Boston.  At Davenport, designer Francis H. Bacon created elaborate floral and scrolled carved detailing in mahogany complete with cherubs and a keyboard cover inlaid with floral and diamond patterns in walnut, birch and mother-of-pearl.  The completed instrument weighed 900 pounds and cost $1,500.  It was delivered to 1800 S. Prairie Avenue in late December 1887.  Ignacy Jan Paderewski, Sergei Rachmaninoff, and Percy Grainger were among the many world-famous musicians to entertain the Glessners and their friends on the instrument through the years.
After the death of John Glessner in 1936, his daughter Frances moved the piano to her home in New Hampshire.  As no one was able to play it, she began to look for a good home for it and could think of no place as suitable as the President’s house at Harvard University.  John and Frances Glessner had been close friends with Charles Eliot, president of the university from 1869 to 1909.  After the piano was moved to its new location, Frances Lee stated that its placement there was “a unique opportunity to express that friendship, and over the years I was very well content to think of my mother’s beloved piano in such congenial surroundings.”
In the fall of 1978, Martha Stephens, an executive secretary with the Cowles Foundation, took a tour of Glessner house as part of the annual meeting of the National Trust for Historic Preservation in Chicago.  She was most impressed and requested a special tour for her employer, Gardner Cowles, founder and publisher of Look magazine.  During his tour, Cowles learned that the original Glessner piano was located in the President’s house at Harvard University.  Cowles, who served as a trustee for the university, donated a new piano to the university so the Glessners’ original piano could be returned to the house.  A benefit concert to celebrate the return of the piano was held on April 12, 1980, the program performed by Etsko Tazaki of New York. Tazaki was a protege of CSO conductor Sir Georg Solti, who attended the concert with his wife, Lady Valerie Solti.
On April 17, a program of German piano works will be performed on the instrument by Sebastian Huydts, Director of Piano and Keyboard Studies at the Music Center of Columbia College, and Elizabeth Newkirk, a 2010 graduate of Columbia College and an associated member of the Civic Orchestra of Chicago.  No doubt, the Glessners would be most pleased to see their beloved piano continuing to entertain audiences in the home they occupied for nearly half a century.
Posted by Glessner House Museum at 6:15 PM