On during the reception following our popular annual “A Walk Through Time” tour of the mansions of Prairie Avenue, the museum took the opportunity to mark an important milestone in our history.  The formal tour program at the museum, with trained docents at its core, turned forty years old and it was an opportunity to celebrate. 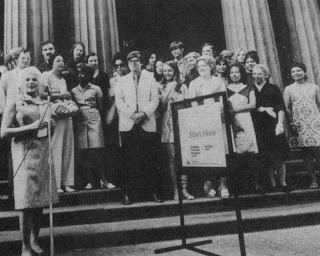 On , the first docent class graduation was held, on the steps of what is now the .  At that time, was owned and operated by the Chicago Architecture Foundation (CAF), so the curriculum for the class was much different from today.  In addition to Glessner, docents received an in-depth training about architecture, with a focus on downtown, as CAF also offered a walking tour of the central .  The docent class was the brain-child of Marion Despres (shown above in the foreground), one of the small group of individuals who saved Glessner from demolition in 1966, and Jeanette Fields, the first executive director of the museum.  It was a revolutionary idea that ushered in the concept of architectural tourism in and elsewhere.
One member of the original 1971 class continues as a docent today.  Robert F. Irving has provided thousands of hours of service to countless numbers of visitors to who have come to see not only , but , Second Presbyterian Church, Charnley-Persky House, and the city as a whole.  Irving, who spent the first part of the afternoon regaling visitors with stories as he led them through the at 2020 was on hand for a special tribute.
After opening remarks by museum director William Tyre, the floor was given over to Jason Neises, who spoke about ’s enormous contributions to the CAF tour program, helping to make a destination for visitors from around the globe, who come to learn more about the amazing architecture of this city.  As Neises noted, Irving’s greatest single contribution to CAF was his development of the now immensely popular river cruise, which had its genesis in a private tour given by Irving nearly 30 years ago during the annual NEOCON conference.  Today, the river cruise is one of the most popular tourist attractions in the city.
Jackie Walker-Dunscomb, chair of the Glessner House Museum Docent Council, spoke next.  In her brief and inspiring remarks she summed up the high level of esteem in which Bob Irving is held by the docents, citing him as an inspiration to all who have followed, and declaring him a true legend.
Ann Belletire, speaking as chair of the tour program for Friends of Historic Second Church, regaled the audience with amusing emails sent to her by Bob Irving, reporting on his experiences during weekly tours of the church.  As Ann noted, ’s mastery of the English language and use of words and phrases usually found only in the great English classics, often sent her to the dictionary to fully understand what Bob was trying to say.
Bill Tyre returned to the floor to share a story from Kevin Harrington, long-time professor of architectural history at the Illinois Institute of Technology.  Harrington recalled being interviewed by in 1978 and soon after being treated to his first tour of Glessner house by Bob, an event which left a deep and lasting impression.
Finally read an excerpt from “My Life,” the autobiography of Bill Clinton, who was privileged to have as a professor during his years at .  Of Dr. Irving, writes:
“My other two teachers were real characters.  Robert Irving taught English to freshmen who were unprepared for his rapid-fire, acid commentary on the propensity of freshmen to be verbose and imprecise.  He wrote withering comments in the margins of essays, calling one of his students “a capricious little bilge pump,” responding to another’s expression of chagrin with “turned into a cabbage, did you?”  My papers received more pedestrian rebukes: in the margins or at the end, Dr. Irving wrote “awk” for awkward, “ugh,” “rather dull, pathetic.”  On one paper I saved, he finally wrote “clever and thoughtful,” only to follow it by asking me to “next time be a sport” and write my essay on “better paper”!  One day Dr. Irving read aloud an essay one of his former students had written on Marvell to illustrate the importance of using language with care.  The student noted that Marvell loved his wife even after she died, then added the unfortunate sentence, “Of course physical love, for the most part, ends after death.”  roared, “For the most part! For the most part! I suppose to some people, there’s nothing better on a warm day than a nice cold corpse!”  That was a little rich for a bunch of eighteen-year-old Catholic school kids and one Southern Baptist.  Wherever he is today, I dread the thought of Dr. Irving reading this book, and can only imagine the scorching comments he’s scribbling in the margins.”
After a few remarks by Bob Irving where he commented on the joys of service and the many life-long friendships that have been formed, guests were treated to cake, and was presented with gifts in grateful appreciation for his 40 years of service.  A fitting tribute to an extraordinary individual who is an inspiration to us all.
Posted by Glessner House Museum at 4:31 PM