Museum recreates groundbreaking of 125 years ago 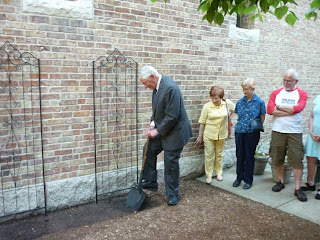 On , over ninety members, friends, and volunteers of gathered in the coach house to launch the 18-month celebration to commemorate the 125th anniversary of the building of Glessner House.  A highlight of the evening was the recreation of the groundbreaking ceremony which the Glessner family held on .
From John Glessner’s The Story of a House, written for his children George and Frances (Fanny), we know the following regarding the events of that day:
“The house was built in 1886.  On the morning of June 1st of that year, I sent word from my office to your mother that wheelbarrows, spades and picks had just then been sent to the site of our proposed new home, that digging would begin at one o’clock, and if she would take Frances and nurse, etc. in the carriage, and let George drive my horse and buggy and stop at the office for me, and all of us reach the site soon after twelve o’clock, you two children — George then fourteen and a half years and Frances a little more than eight years old — might throw the first soil from the foundation trenches.  And that we did.”
A highlight of the recreation of this ceremony was to have the Glessners’ eldest great-grandchild, John Maxim Lee (pictured above), now 84, participate by turning the soil, just as his grandmother and great-uncle did 125 years ago.  John Maxim Lee and his wife Rosalie traveled from their home in for the event.
Two Madame Alfred Carriere white climbing roses will be planted in the two holes dug by John Lee during the ceremony to represent John and Frances Glessner and to commemorate the 125th anniversary.  This particular rose was chosen because it was developed in 1879, and would have been available at the time the house was built.
The event also marked the official launch of the museum’s 125th anniversary fundraising campaign, the goal of which is to raise $125,000 for restoration projects by December 2012.  By the end of the evening, $21,000 in pledges had been received, a glorious and encouraging beginning to the campaign.
The unveiling of the reprint of Glessner’s The Story of a House and two exhibits – one on H. H. Richardson, and one showcasing architecture and design books from the Glessners’ library - provided an exciting sequence of events.  The evening closed with a presentation from museum director and curator Bill Tyre, who provided a fascinating look at events in the world, the nation, , and Prairie Avenue in 1886, placing the building of the Glessner House into its proper context.
Posted by Glessner House Museum at 12:24 PM