George Glessner and his love of technology 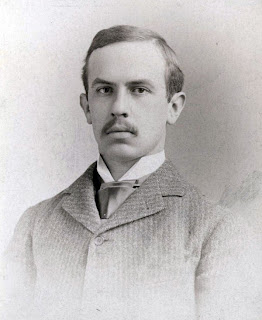 George Glessner was a precocious child, and always took a strong interest in anything scientific or related to the evolving technologies of the latter part of the 19th century.  His mother records on a number of occasions in her journal comments that George’s tutors made about his abilities and interests.  In May 1886, when George was fourteen, she made the following entry:
“George is intensely interested in chemistry – and his laboratory is wonderfully arranged.  Dr. Mitchell (the tutor) says it is far ahead of his own.  George has all kinds of printed labels and signs.”
When the Glessners moved into their new home on Prairie Avenue in December 1887, George installed equipment in the schoolroom, including a telegraph and a signal repeated.  The telegraph allowed George to communicate with his friends in the neighborhood, as recalled by his father in The Story of a House:
“The school room, approached from the front door without going through other parts of the house was a rendezvous for George’s friends and teachers alike, for they were all comrades together.  Here they had their long, long thoughts of youth, their boyish activities, their fire brigade, their regularly organized telegraph company, presided over, as a labor of love, by Norman Williams, one of the ablest and most astute of lawyers, with wires connecting seven different residences of the members, all centering in this house.” 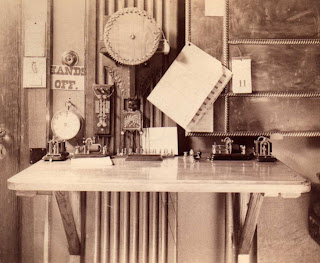 The signal repeater allowed George to receive alarms coming into the local fire companies.  George and his friends, the “fire brigade,” would run out to watch the fires, and in a number of instances, George would photograph the buildings after the fire had been extinguished, such as the image below.  Only a few residences in the city were equipped with these signal repeaters. 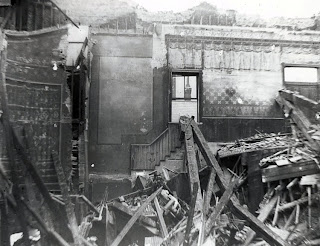 His meticulous attention to detail and fascination with modern machinery continued into adulthood, as recalled by his nephew John Glessner Lee:
“In Chicago, where he and his family occupied a house which was contiguous to and a mirror image of our own, he had a basement shop.  It was a metalworking shop with lathe and drill press, clean and neat with cabinets and drawers along the wall.  At The Rocks the main shop in the Tool Building was much more extensive than was really necessary – a complete line of woodworking machines and several metalworking machines as well, all driven by a monumental gasoline engine with massive flywheels and an elaborate series of shafts and belts.”
His nephew also recalled the increasingly large role George played in the management of The Rocks:
“He undertook several major improvements, such as the installation of electric light with its own generating station, the acquisition of the old Bethlehem waterworks on Garnet Mountain and the piping from there to the farm’s reservoir.  In those days The Rocks boasted more than twenty buildings and over eighty men were employed.  How much of this activity he was responsible for I never knew, but I suspect that he had a major hand in most of it.”
He was chief owner and manager of the Bethlehem Electric Company and the managing director of the affiliated Lisbon Light and Power Company.  It was said that he “found his chief interest and enjoyment” in overseeing the operations of these two companies.   While serving four terms in the New Hampshire state legislature, he took particular interest in bringing electricity and other modern technology to all parts of the state.
George Glessner died on 29 and in his honor, all businesses in Bethlehem New Hampshire closed the day of his funeral.   One can only imagine what he would think of the unimaginable advances in technology that have occurred since his passing.
Posted by Glessner House Museum at 5:05 PM