The Glessners escape the Chicago winter in Santa Barbara 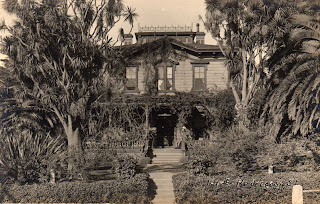 Frances Glessner experienced serious health issues during the year 1910.  At the recommendation of her doctors, the Glessners left Chicago on December 16 for Santa Barbara, along with her sister Anna Robertson, John’s brother George Glessner, and a nurse.  They arrived on 10 and moved into their leased house at 131 E. Pedregosa Street.  They returned to Chicago on 11.  The climate proved so favorable for Frances Glessner’s health that the Glessners made another trip to Santa Barbara during the winter of 1912.
The following journal entries were written by John Glessner during December 1910.
December 11:  Frances lost eight ounces in weight this week and has found Chicago is not an inspiring place for a convalescent.  About all she can do is to motor an hour or two in the morning and two hours in the afternoon, but always to the same places, and it is all too monotonous.  After consultation with Dr. Favill I closed by telegraph lease of the Reddington house in Santa Barbara, and have engaged transportation for Simon and Mattie and Annie (three of the servants) on Tuesday night, and for ourselves and Miss Duncan, Anna Robertson and my brother George on Friday night next.  I am hoping that Frances will not find the three days journey is too hard, though she dreads it.  Dr. Favill thinks it can be done without injury and that the Santa Barbara climate may be good for her.
December 20:  We left Chicago on Friday night, December 16th, at 9 o’clock via CRd and PRR and Southern Pacific and reached Santa Barbara at 10:15 Monday night, without accident or delay, and with much more comfort for Frances than we had thought possible.  Frances and I had the drawing room, and the rest of our party had the two compartments adjoining.  Frances used my berth during the day and did not leave the part of the car belonging to us during the whole trip.  She had coffee brought from the dining car each morning and for all the rest depended on her lunch basket and the French rolls sent by Mrs. Drake to the train.  On Sunday Anna went to the dining car kitchen and told the cook how to prepare corn meal gruel for Frances’ lunch and watched him make it.  This was after I had arranged with the conductor that she might do it.  Later, the dining car conductor brought Frances a fine bunch of carnations in a glass vase.  Our porter also was sympathetic and attentive.
December 25:  Christmas Day, in Santa Barbara in the Redington house, 131 Pedregosa street on what we would call the northwest corner of that and Santa Barbara street, though the streets of the town do not run with the points of the compass.  It seems strange to have Christmas with thermometer above 70 degrees in the shade.  The house faces to the north of east, looking out upon the waters of Santa Barbara channel of the Pacific ocean about 1-1/2 miles away, with the water in plain sight from our porch, for the ground rises to our house and then very gradually falls away behind it, though it rises straight up the mountains to the north of us.  The yard is large, with flowers – poinsettias, geraniums, heliotrope, begonias, daisies, roses, etc. and trumpet vines and other vines in bloom; and shrubs and trees – the largest rubber tree in town on the north of the house that continually drops its pods of seeds in the floor of the unroofed north porch, and a great hedge of arbor vitae making the south boundary a good yard – perhaps the tallest of these hedges in the town: trimmed square and angular and to Frances mind and mine very unhandsome.  For the rental and as an appanage of the place is furnished a gardener to care for the grounds and him we pay a little extra compensation for caring also for the boots, carrying in the wood and out the ashes, etc. etc.
The house is quite roomy.  The front porch is only half roofed over but all screened with vines, and from this porch the front door opens into the entrance hall, sitting room and library, all combined, with the parlor to the west shut off by folding doors, always wide open.  Back of the sitting room is bedroom and bath (not occupied) having north and west exposure, much shaded, and denominated “the tomb” by Mrs. Ripley when she occupied the house.  Back of the parlor are dining room and butler’s pantry and kitchen, all with south and west exposures.  The second story has four master bedrooms and three bathrooms, and two smaller bedrooms, and the third floor has three servants’ bedrooms and bathroom.  George G. and Anna Robertson have two of the large bedrooms and Miss Duncan and Annie the two small ones, and Frances and I the other two on the second floor.  The library is well stocked with good books: there are some good pieces of Japanese furniture and some good Japanese bronzes, but the rest of the furniture and ornaments and linen and silver are very ordinary.
Posted by Glessner House Museum at 4:02 PM