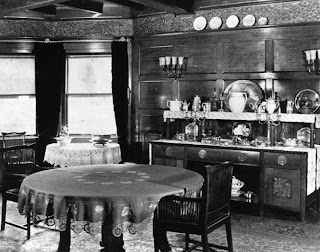 PART I – THE DINING
The dining room of Glessner house is a warm and inviting space that witnessed numerous dinners and entertainments during the years that the Glessners were in residence.  The walls are covered in beautiful quarter-sawn oak paneling.  Above the paneling and plate rail is a frieze, approximately 14 inches in height that was orignally covered in what was known as “Japanese leather paper.”  These papers were introduced in England and the United States in the 1860s to simulate the look of highly embossed leather.  Produced in Japan and offered for sale through various English and American dealers, the thick paper was pressed while wet into designs carved on wood rollers.  After the paper dried, it was sized, covered with silver or gold leaf, stenciled, painted, and lacquered to produce a rich appearance.   The original paper, although well documented in historic photographs, had been removed by the time the house was purchased for use as a museum in 1966. 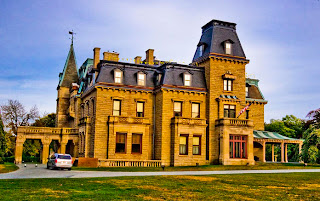 PART II – CHATEAU--
Newport Rhode Island is known for its extraordinary collection of summer “cottages” – huge mansions constructed by some of the wealthiest citizens of the United States.  Among these cottages is a home known as Chateau-Sur-Mer, located at 474 Bellevue Avenue.  Built as a year-round residence, this National Historic Landmark is known for its extraordinary collection of furniture, wallpapers, ceramics, and decorative finishes.  It was the grandest house in Newport until the appearance of the Vanderbilt houses in the 1890s.  The house was completed in 1852 in the Italianate style for William Shepard Wetmore who made his fortune as a China trade merchant.  One of Newport’s great social events, the “Fete Champetre” (an elaborate country picnic for over 2,000 guests) took place at the house in 1857.  Wetmore died in 1862 and left the bulk of his sizeable estate to his son George who hired Richard Morris Hunt in the 1870s to remodel and redecorate the house in the popular Second Empire style.  George Wetmore later served as governor of Rhode Island and as a U.S. Senator.  The house was purchased by the Preservation Society of Newport County in 1969 and operates as a house museum today.  (Visit www.newportmansions.org for further information). 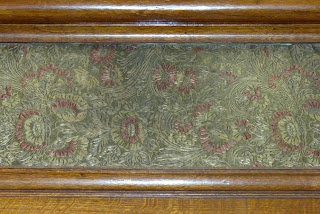 PART III – RESTORATION OF THE GLESSNER DINING
The dining room of Glessner house was restored in 1974.  Research on the room documented the original frieze as a Japanese leather paper.  Through a fortunate chain of events, it was learned that original unused rolls of Japanese leather from the late 19th century had been found in the attic of Chateau-sur-Mer.  Glessner house was able to acquire a sufficient quantity to restore the frieze.  Although the pattern is not identical to the original, it is very close, and the decorative surface closely replicates what the Glessners selected.
THE NEWPORT-GLESSNER CONNECTION CONTINUES
On Saturday at 4:30pm, the Victorian Society in America will hold an event at Glessner House Museum to promote their annual summer schools in Newport, Rhode Island and London, England.  (Chateau-sur-Mer is included in the program).  At the event, attendees will listen to short illustrated programs on both schools, scheduled for June and July 2012, respectively, and will have the opportunity to ask questions, and learn about scholarship opportunities.  The event is free of charge but reservations are requested to .
Posted by Glessner House Museum at 7:27 PM