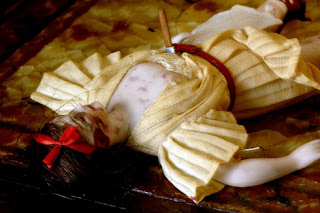 On at 7:00pm, will host the premiere of a feature-length documentary narrated by iconic filmmaker John Waters entitled Of Dolls and Murder.   The film explores the extraordinary career of Frances Glessner Lee and her contributions to the field of legal medicine.  Tickets are $15 per person ($10 for members and students) and prepaid reservations to are required.  For more information on the film, visit http://www.ofdollsandmurder.com/.
In preparation for the event, being held on Frances Glessner Lee’s 134th birthday, we repeat a blog posting from 2011 detailing her fascinating career. 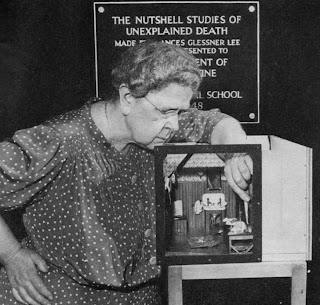 Legal Medicine
Frances Glessner Lee (1878-1962) became interested in legal medicine through her friendship with Dr. George Burgess Magrath, a classmate of her brother George at Harvard.  She enjoyed listening to his stories of cases where his skill as a medical examiner helped to uncover the true cause of unexplained death.  During his career he personally investigated 21,000 deaths and testified at more than 2,000 court cases.
In 1932, Lee gave a gift of $250,000 to Harvard University for the creation of a chair in Legal Medicine in the Medical School.  The endowment ensured the perpetuation of the department in which Dr. Magrath had taught since 1907.
Two years later, Lee presented the school with a library of over 1,000 volumes, which was dedicated as the George Burgess Magrath Library of Legal Medicine.  The library, unique in the United States at the time, was assembled personally by her and contained many rare volumes, some dating back to the 15th century.
Her continual involvement in legal medicine led to her appointment as a State Police Captain in New Hampshire in 1943, one of many titles that would eventually be bestowed upon her.  For the remainder of her life, she was known affectionately as “Captain Lee.”  At the time of her appointment, she was the only active female state police captain in the country.  She subsequently became the first female member of the International Association of Chiefs of Police. 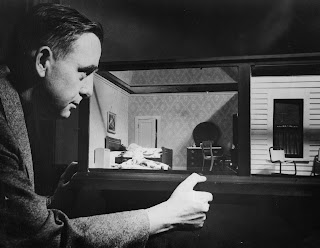 Nutshell Studies
It was at this time that Lee came up with the idea of creating a series of eighteen miniature rooms depicting crime scenes to be used for the study and analysis of evidence by state police officials.  Known as the Nutshell Studies of Unexplained Death, the name was derived from an old police saying, “Convict the guilty, clear the innocent, and find the truth in a nutshell.”  The models were meticulously created on the scale of one inch to the foot.  Doors swung on tiny hinges, windows moved up and down, and a minute mousetrap in the corner of one room operated like the real thing.  Each room took about four months to build in an elaborate workshop set up in her home.  Many of the pieces were crafted by her own hands; other portions were constructed by Ralph Mosher, a carpenter hired full-time to work on the project.  The models were composites pieced together from different cases.  Everything shown had actually happened, albeit under other circumstances.  Some portrayed murder, others accidental death or suicide.
Seminars in Homicide Investigation
In conjunction with the models, Captain Lee initiated biannual seminars in homicide investigation.  State policemen from around the country vied for the opportunity to attend the seminars.  Outstanding speakers in the field of legal medicine were brought in to lecture, and a major component of each seminar was the analysis of the “Nutshell Studies.”  Attendees were given 90 minutes to analyze the minute clues hidden in each model, and then present their findings.  Graduates of the seminars became Harvard Associates in Police Science, a distinction they would use when testifying in court cases.
Captain Lee planned an elaborate banquet at the conclusion of each seminar, held at the Ritz.  A typical banquet would run $3,000, with the dinner served on a set of gold-leafed china made especially for her use.
Erle Stanley Gardner, author of the Perry Mason novels, was one of the few “laymen” allowed to attend a seminar.  Afterwards, he dedicated his newest book, The Case of the Dubious Bridegroom, to her.  In addition to proclaiming her “one of the few women who ever kept Perry Mason guessing” he went on:
“I have dedicated this book to her as an expression, in some measure, of my appreciation; and in admiration of the manner in which her mind, working with the accurate precision of a railroad watch, has brought into existence the over-all plan of a course in training that is helping to make the competent state police official as much a professional man as the doctor or lawyer.  I herewith tender her my profound respect, my deepest admiration, and my eternal gratitude.”
Posted by Glessner House Museum at 12:37 PM