The Story of a Chair 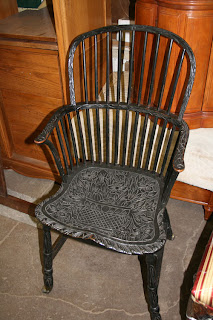 Of the many Glessner chairs in the collection of the museum, one of the most interesting is a modified chair located on the west side of the partner’s desk in the library.    The chair recently underwent restoration, so the time is right to look back at its history.
chairs are among the most recognized pieces of furniture.  Their delicate graceful shape has been reinterpreted in many variations since the chair was first developed in the 18th century.  Typical features include a solid wooden seat into which the chair-back and legs are pushed into drilled holes.  The graceful curved back of the chair is formed from steam bent pieces of wood.  The exact origin of the chair is unknown; however steam-bending was being used to produce the characteristic “bow” of the chair by the early 1700s.  The earliest documented examples were shipped from , to in 1724, hence the name - although chairs were produced in many other areas of as well as the .
Our chair, which features an ebonized finish, was produced about 1880 and featured a saddle seat, designed for the comfort of the occupant.  In this chair, however, the seat is elaborately carved with a design featuring a large vase holding a bouquet of stylized six-petaled flowers arrayed on a stippled background.  The design is reminiscent of 17th century carved panels on English case furniture.    Additional carving, albeit simpler in design, is found on the arms and back of the chair. 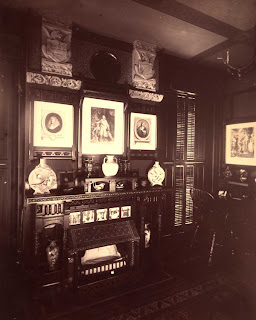 The chair is clearly visible in photographs of the Glessners’ library in their home at 261 W. Washington Street in (at what would now be the northeast corner of Washington and Morgan).  In these images, taken about 1880, the chair is being used with a davenport desk made for the Glessners in 1879 by Isaac Scott. 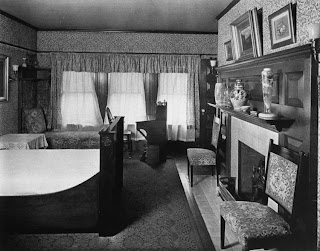 The chair also shows up in a 1923 photograph of the bedroom formerly occupied by Fanny Glessner.  In this image the chair sits in front of the windows, and is again paired with the Scott davenport desk.  (There is no evidence the chair was ever used in the library of the Glessners’ Prairie Avenue home.  However, the Windsor chair visible in historic photos of the library is not in the collection of the museum, so the decision was made to substitute this chair in its place). 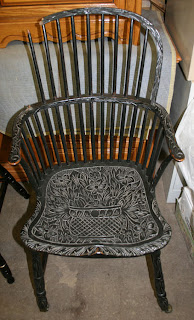 Given the delicate construction of the chair, it is not surprising that it suffered damage through the years.  In 1993, a section of the back above the left arm broke off, and a close examination revealed that this section had been broken previously. 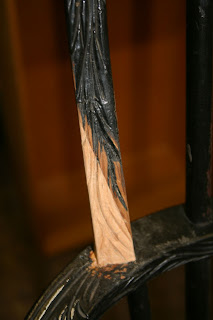 In February 2012, the chair was sent to King’s Mill in for repair.  Since the two ends of the broken section were rough, the decision was made to cut off the ragged ends, insert new pieces of wood and carve them to match the existing design.  Once the pieces were carved, the sections were painted to match the existing finish.
The chair was returned on and is back on display by the partner’s desk in the library.  Be sure to notice it on your next visit to the museum.
Posted by Glessner House Museum at 6:01 PM