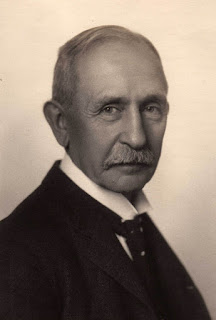 January 26, 2013 marked the 170th anniversary of the birth of John Jacob Glessner in Zanesville, Ohio.   Exactly one hundred years ago – January 26, 1913 – he recorded in his wife’s journal his thoughts on turning 70:

The days of our years are three score years and ten and this is my 70th birthday.  I have seldom thought of myself as old or as ever to be old, but have noted sometimes that my family and friends speak of or act towards me as no longer young.  My father died at 97, his father at 89, the result of a fall from a fruit tree he was pruning.  My mother died at 82, and her mother at past 97.  I am not conscious of much decline in bodily or mental vigor, and should my life extend to four score years or more may I hope that they may not be years of labor and sorrow.  “We take no note of time but by its flight.”  Perhaps we grow old with troubles, not with years: hence my feeling of youth.

John Glessner was in fact still leading the life of someone who did feel much younger than 70, being actively involved as Vice President at International Harvester and serving on a number of boards of cultural and philanthropic organizations across the city.  The same journal entry that is quoted above indicates that during the week he and his wife entertained friends for dinner at their home at least twice, received a number of other guests to see Frances Glessner Lee’s miniature orchestra, took their granddaughter to the opera on Wednesday, and attended the Chicago Symphony Orchestra concerts on both Friday and Saturday.   (An interesting side note is that the weather 100 years ago seems to have been as warm as we are experiencing in 2013.  John Glessner notes in the journal that “Here the weather has been fine, several days this week being at least as good as any in California or Florida.”)

Glessner lived well beyond 70, and well beyond the “four score years” he noted above.  He died on January 20, 1936, six days before his 93rd birthday.   Although his social calendar was a bit slower, following the death of his wife in October 1932, he was still active until just a few weeks before his death, going to his office at International Harvester regularly, and attending the Orchestra concerts.
Posted by Glessner House Museum at 3:35 PM