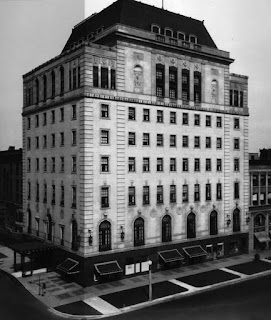 The Woman’s Athletic Club of Chicago, celebrating its 115th anniversary in 2013, has deep Prairie Avenue roots.  Its founding can be traced back to a dinner party at the home of Mrs. Philip D. Armour at 2115 S. Prairie Avenue, and many of the early members and supporters were residents of the street as well.  On March 9th, the museum offers the exciting opportunity to tour the beautiful Club building completed in 1929 at 626 N. Michigan Avenue, including the elegant public spaces, as well as rarely seen behind-the-scenes spaces, truly an upstairs-downstairs experience.   For further information on the tour, call 312-326-1480.  Group size is strictly limited.

The idea for a Club where women could exercise and enjoy a leisurely meal with friends originated with Mrs. Paulina Harriette Lyon.  One night, while dining at the home of Mr. and Mrs. Philip D. Armour, she described her vision of the club.  Mrs. Belle Ogden Armour found the idea most intriguing and an important project for women of the city to undertake (unlike the men who thought it an “excellent joke”), and soon after pledged $50,000 to put the project in motion.   Such an idea was entirely new; it would become the first athletic club for women in the United States.   The Club was officially incorporated on September 13, 1898 and Mrs. Armour was elected president.  Several of Mrs. Armour’s neighbors quickly joined, including members of the Allerton, Caton, Drake, Hutchinson, Lowden, Pullman, Pike, and Smith families, and nationally prominent women such as Susan B. Anthony, Julia Ward Howe, and the wife of President McKinley accepted honorary memberships.

The first home for the Club consisted of three floors in a six-story building on Michigan Avenue north of Adams (now the site of the Peoples Gas Building).  The official housewarming took place May 24, 1899 and it would remain the home of the Club until 1909, when they moved to larger quarters in the recently constructed International Harvester building at 606 S. Michigan Avenue (where John Glessner had his office).   It was in that same year that Belle Armour was made honorary president for life (she died in 1927).

The Club had long dreamed of a building of its own and the opportunity came in the late 1920s when a site became available at the northwest corner of Michigan Avenue and Ontario Street.  Architect Philip B. Maher, just 33 years old at the time, was hired to design the building, and designer Marian Gheen the interiors.  North Michigan Avenue was undergoing a major transformation at the time, so the move north was considered most appropriate and timely.   When the building was designated a Chicago landmark on October 2, 1991, the report said in part:

The building’s architecture illustrates the sophisticated urban ambience of North Michigan Avenue, as it was originally planned and developed in the 1920s.  The modern French-style classical design, which is reminiscent of continental-style Parisian elegance, is one of the last standing links to the street’s formative years.

The building was dedicated and opened in April 1929, just a few months before the Stock Market Crash and the start of the Great Depression.  The Club struggled during those early years in their new building, but a persistent and dedicated group of members ensured its long-term survival, as other Clubs around them failed never to reopen.

Among the more interesting furnishings are the chandeliers in the second floor gallery and card room, made from two old gas chandeliers which once hung in the John B. Drake home at 2114 S. Calumet Avenue.  The nearby Ladies Powder Room contains several miniature rooms created by Mrs. James Ward Thorne, a resident of 1708 S. Prairie Avenue and a friend of George and Alice Glessner and Blewett and Frances Lee, who occupied the two houses immediately to the north.  The second floor also features a portrait of founding president Belle Armour (shown below), painted in 1939 by Charles Sneed Williams. 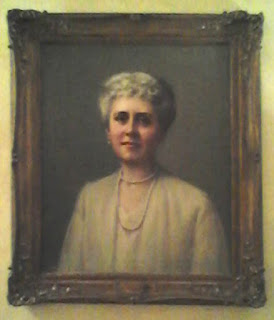 Today, the Club serves as a thriving link to our City’s past and continues to provide an elegant oasis for its members amidst the hustle and bustle of North Michigan Avenue.
Posted by Glessner House Museum at 4:28 PM