The stone capitals on Glessner House 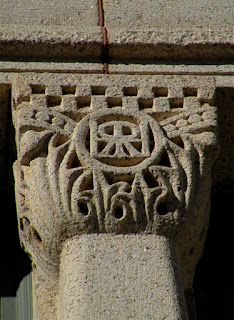 The façade of Glessner House is dominated by courses of rusticated Braggville granite of various heights, creating the “fortress-like” appearance so often sited in books on American architecture and so representative of Henry Hobson Richardson’s mature style.  Upon closer examination, however, subtle ornamentation enlivens the façade in a few carefully selected locations – beautifully executed stonework that relates directly to the detailing which visitors find upon passing through the front door.

Among the details are a series of nine carved capitals terminating the dressed stone piers set between the second floor windows on both the façade and the north side of the house.  Each of the nine capitals is different, mixing and matching various motifs including the acanthus leaf, dentils, discs, diamonds, scrolls, and basket-weave designs.  Of particular interest is the capital located directly over the front entrance which features the monogram of Richardson, with its pair of mirror-image capital Rs set within a larger letter H, the whole contained in a large circle (see image at top). The capitals were carved in situ, as was most of the stone decoration.  Early views of the house under construction show the blocks of stone in place awaiting their decoration by the carver’s hand.  The Glessners’ good friend and designer, Isaac Elwood Scott, was asked to prepare designs for the capitals, but the Glessners were not pleased with the drawings he presented.

A letter dated August 9, 1887 from George Shepley (the architect in the firm of Shepley, Rutan and Coolidge who oversaw the completion of Glessner House) to John Glessner notes that “Mr. Evans started last week with his carvers for Chicago and St. Louis.”

John Evans (1847-1923) was a Welsh sculptor who first worked with Richardson on the completion of the frieze atop the tower of the Brattle Square Church in Boston in 1873.  Evans also provided the sculpture at Boston's Trinity Church and later went on to found a nationally recognized sculptural studio in Boston.  In 1897, he became a member of the Society of Arts and Crafts in Boston, and a prominent member of Boston’s medieval “guild” of artists.  Richardson used Evans for the sculpture and carving on a number of his buildings, and Shepley, Rutan and Coolidge continued to use his services after Richardson’s death in 1886. 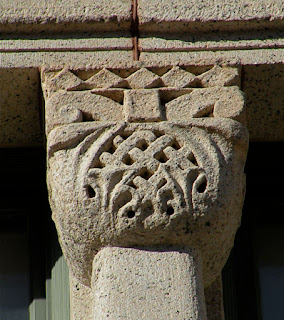 The receipts of the construction of Glessner House show that Evans, or more correctly his firm, Evans & Tomb, was paid $1,086.50 for the stone carvings, including the nine capitals.
Posted by Glessner House Museum at 2:54 PM