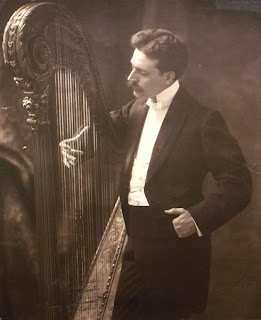 John and Frances Glessner were deeply involved with the Chicago Symphony Orchestra from the time of its founding in the fall of 1891.  Their support went far beyond being merely financial – conductors Theodore Thomas and Frederick Stock were intimate friends, and many of the musicians in the orchestra enjoyed the Glessners’ hospitality at 1800 South Prairie Avenue through the years.  Perhaps no one benefitted from the Glessners’ friendship more than harpist Enrico Tramonti and his wife Juliette.

Enrico Tramonti was born in Palermo on the island of Sicily on October 3, 1874.  He began studying music as a young teen and had settled on the harp by the time he was 15.  In 1896, he made his debut before Queen Margherita of Italy and two years later performed for Queen Victoria.  He was married in 1900 to Juliette Oltramare (born May 8, 1880 in Geneva, Switzerland), and assumed the position of harpist with the Chicago Symphony in February 1902.  The Tramontis had two sons – Albert (born January 1901) and Jacques René (born May 1902).

It is interesting to note that Enrico Tramonti was the exact age of the Glessners’ second son John Francis (who died as an infant), and Juliette Tramonti was two years younger than their daughter Fanny.  The fact that the four became close friends is not surprising – the Glessners frequently befriended individuals whom they respected for their talent and intellect, regardless of the difference in age.  In addition, Frances Glessner’s ability to provide a warm and inviting home for those arriving in Chicago is well documented in numerous letters from the Tramontis and many others. 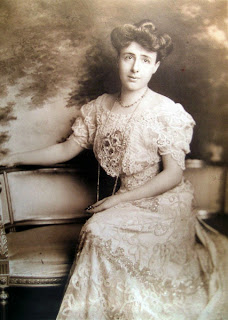 An excerpt from a letter written by Juliette to Frances Glessner in November 1911 is typical:

“Now, dear dear Mrs. Glessner you are spoiling us, you do so much for our happiness – what can we do for you?  Love you and Mr. Glessner with all respect and devotion – Yes, but this we have done for a long long time, and no presents could increase it.  Only it is awfully good to be spoiled!!  Especially when you are so far from home.”

In February 1903, Frances Glessner noted in her journal, “Today we had the Reading Class luncheon.  I had Tramonti, the new harpist in the orchestra come up and play for us.  I introduced him to the ladies and made up a French speaking table for him.”  Frances Glessner also invited Juliette Tramonti to become a member of the Reading Class, an honor which she greatly cherished.  The Tramontis took a flat at 2218 South Prairie Avenue and became frequent guests at the Glessners’ home, and their summer estate, The Rocks, in New Hampshire.

Frances Glessner made sure to include the Tramontis in holiday events as well; aware of the fact they were far away from their home and family.  Her journal records numerous holidays where the Tramontis were among the small group of invited guests.   In 1911, Frances Glessner recorded the following entry, “Mrs. Tramonti came to breakfast on Sunday morning (Christmas Eve) and was here nearly all day helping to decorate the tree.”  The Tramontis also spent Christmas Day with the Glessner family.   Juliette Tramonti wrote the following letter of thanks:

“My dear Mrs. Glessner,
I have not thanked you half as much as I felt yesterday, for the beautiful Christmas you made for us!  It will be a long remembered one, the beautiful, inspiring tree, the fine family dinner, our beautiful present, and above all the sweet comforting feeling of being in a family (and such a one!) and being made almost to believe you belong to it – all that is above words, but I just want to tell you that we feel it deeply!
Thank you for all, dear Mrs. Glessner and believe me yours, all devoted
Juliette Tramonti”

“They were just plain nice people and fun of course.  He was Sicilian and she was Swiss.  They had two sons which they always left with the grandmother in Switzerland, so they were never in Chicago with them.  They went home in the summer to be with the children.”

Enrico Tramonti, in addition to being an accomplished harpist, was also a talented metal worker.  No doubt this connection strengthened the friendship between him and Frances Glessner, who was a talented silver smith.  Tramonti presented Frances Glessner with several objects including a beautiful trinket box now on display in the parlor, shown below.  The box displays masterfully crafted metalwork featuring a beetle at the center of the box. 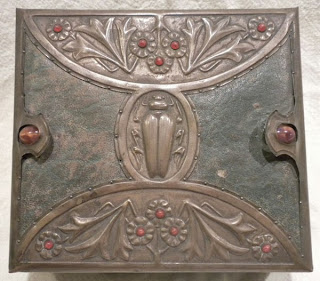 Tramonti also crafted two hanging telephone registers for holding names and telephone numbers, which the Glessners hung above their telephone table in the library.  The two pieces are now displayed on the library desk, and the brass tops of both are shown below.

Enrico Tramonti left the symphony in 1927 after 25 years of service and he and his wife returned to Europe.  He died in Geneva, Switzerland on August 10, 1928 at the age of 53.  The Tramontis move back to Europe and his subsequent passing the next year must have been difficult for the Glessners with whom they had enjoyed a quarter century of friendship.  Juliette Tramonti died in 1943.
Posted by Glessner House Museum at 4:28 PM