A new Morris & Co. carpet for the house 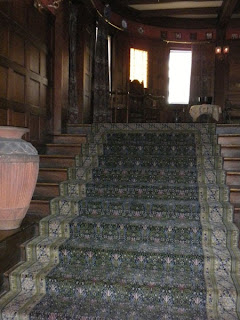 On work was completed on the installation of reproduction Morris & Co. carpeting on the front staircase.  It is an exact copy of the carpeting installed by the Glessners in 1887, and provides an inspiring view for visitors passing through the entry vestibule into the main hallway. 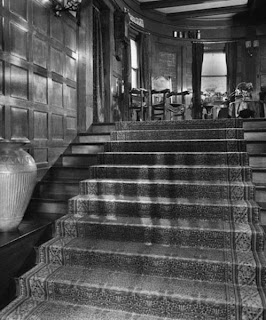 The pattern is known as Lily and was designed by William Morris about 1875.  It was manufactured for Morris by Yates & Co. (later Wilton Royal Carpet Factory Ltd.) of , .  It is a fine example of the machine-woven pile carpets produced by Morris & Co. beginning in the mid-1870s and was made of 100% woolen pile on a jute backing.  Lily was one of 24 Wilton carpet designs available through Morris & Co. and this type of floor covering proved the most commercially popular of all those sold by the firm.

The current carpet was made by The Grosvenor Wilton Company Ltd., located in Blakedown, , and is also 100% worsted wool.  It was sold through J. R. Burrows & Company, historical design merchants and is the gift of long-time museum member Robert Furhoff, in honor of the 125th anniversary of the house.  Installation was undertaken by Bryan Gfroerer of The Gfroerer in .  The company is nationally recognized for their installation of historic reproduction carpets, and prior projects include George Washington’s and the Lincoln Bedroom at the White House.

William Morris’s first two designs for carpets were registered in December 1875, and five more were registered the following year.  Other designs used by Morris & Co. for carpets, including Lily, were not registered leading to other companies plagiarizing some of the patterns including Lily which was considered one of the best of Morris & Co. and one of the most popular.  Brochures issued by the company warned consumers to be aware of the copying of their patterns by other companies whose products were “of inferior make and colouring.”

Morris & Co. employed five different techniques in the production of its machine-woven carpets – three-ply, pile, loop, Patent Axminsters, and ‘Hand-knotted’ Axminsters.  Lily is an example of the pile carpets, which were praised by the company in an 1883 brochure produced for the Boston Foreign Fair:

“Wiltons must be classed as the best kind of machine-woven carpets. . . If well made the material is very durable, and by skillful treatment in the designing, the restrictions as to color are not noticeable.” 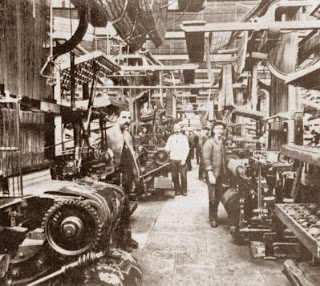 carpets were woven with a jacquard attachment on the loom enabling designs of two to six colors to be made.  The pattern was formed on the surface of the carpet by different colored looped warp threads of worsted yarns on a strong woven foundation of linen, jute, or cotton.  The carpets were woven at 50 – 150 tufts to the inch, and once the loops were cut, a soft velvety texture resulted.  ( carpets are produced in the same manner, but the loops remain uncut).  carpets were available in four widths varying from 18 to 36 inches (the Glessner carpet consists of two strips 25” wide).  Patterned borders became very popular and when sewn around two or three attached widths of , provided an attractive carpet.  The carpet supplied for the Glessner house has a 13-1/4” border on all four sides, giving the impression of a large area rug placed over the stairs. 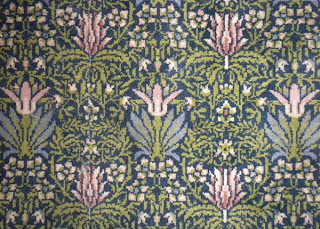 Lily is regarded as one of the finest of all the carpet designs produced by Morris & Co. and it was the first design used exclusively for pile carpets.  It epitomizes Morris’s love of and use of nature and its simplification to its purest form and features floral designs in white and pastel colors against a dark background.  The repeat is small and nearly square, measuring 9-1/2” by 8-3/4”, almost giving the repetitious appearance of floor tiles.  In reality however, the small repeats were due to the restrictions of the woven carpet technique itself.

Lily was one of several machine-woven Morris & Co. carpets used in the house and sat alongside hand-knotted carpets such as the huge Hammersmith carpet used in the first floor main hall (and later copied to provide the present wall-to-wall carpet).  Its installation helps provide visitors with a better sense of the wonderful variation of patterns and colors that the products of Morris & Co. provided for the “warm and inviting” interior of the home of John and Frances Glessner. 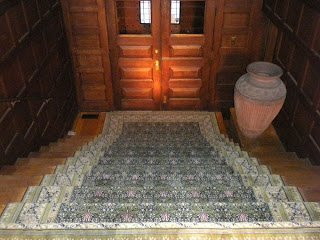