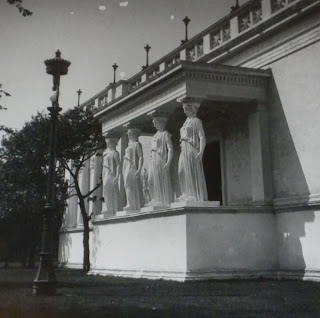 On Wednesday November 6, 2013, the museum will present a lecture entitled “The World’s Columbian Exposition – a 120 Year Perspective.”  The speaker is Diane Dillon, director of scholarly and undergraduate programs at the Newberry Library and a frequent lecturer on Chicago’s two World’s Fairs.  A small exhibit of Fair-related objects from the museum collection will also be on display.  Tickets are $10 and reservations may be made by calling Glessner House Museum at 312.326.1480. 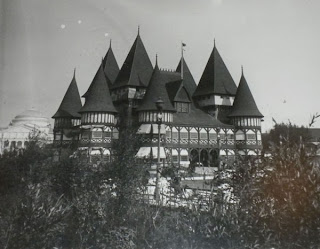 The World’s Columbian Exposition remains a truly legendary event in the history of Chicago and is even commemorated with a star on the official city flag.  The statistics on the Fair are almost unbelievable – nearly 200 “temporary” buildings spread across more than 600 acres of land, and more than 27 million visitors in just six months.   The fair grounds were dedicated on October 21, 1892 and officially opened to visitors on May 1, 1893.  The Fair closed very quietly on October 30, 1893 just two days after the city was shaken by the assassination of Mayor Carter Harrison Sr.  Only two buildings from the Fair survive in Chicago today – the Palace of Fine Arts (now the Museum of Science and Industry) and the World’s Congress Auxiliary Building (now the Art Institute of Chicago).  A few other structures were dismantled and rebuilt in other parts of the country.

The masterminds behind the Fair were architect Daniel Burnham and landscape architect Frederick Law Olmsted, both of whom were close friends of the Glessners.  Due to that fact, the Glessners followed the design and construction of the fair closely and were afforded special access to the grounds both before and during the run of the fair.  Their son George also took a large number of photos, three of which are reproduced in this article.  We present a few excerpts from Frances Glessner’s journal indicating their interest and participation in Fair activities.

Inaugural Reception of the World’s Columbian Exposition - October 19, 1892:
“Wednesday I shopped and in the evening went to the grand ball at the Auditorium.  I wore a yellow brocade, the dress was made up after the fashion of a morning glory – the idea carried out all over.  There were forty one patronesses, about thirty three were there, all beautifully dressed.  We were taken to our places on one side of the auditorium.  The whole place was floored in back as far as the boxes go. . . Mr. Lathrop took me to my place.  The Vice President came in on Congressman Durborrow’s arm.  A military escort preceded him.  He was followed by members of the Cabinet, Senators, Judges of the Supreme Court, foreign diplomats – everyone in court dress, uniform, and full dress.  All presented to us.  Ex-president Hayes stood and talked a minute with me as others did.  After the presentation we were taken to our boxes where we had seats . . . I sat next to Mrs. Palmer.  We came home at half past eleven.  The ladies were each given a bouquet of red and yellow roses tied with red and yellow ribbons.”

Opening of the Fair – May 1, 1893:
“The weather was cloudy but it did not rain.  We drove out to the Exposition in the carriage.  When we went inside of the grounds we met Mr. and Mrs. Walter Peck and Mr. and Mrs. Rice.  We walked with them up to the Administration Building and a letter which Mr. Peck showed the guards took us to Mr. Higinbotham’s room and out of his window on to the grandstand where we had a full view of all of the crowd, the President, and all of the foreign officials – the Duke of Veragua, etc.  When President Cleveland opened the fair, the statue of the Republic was unveiled, the fountains played, the flags from every pinnacle and turret were unfurled, the orchestra played America.  It was a grand and touching sight.  It is estimated that there were three hundred and forty two thousand people there.”

Reception for Princess Eulalie – June 16, 1893:
“In the evening John and I went to Potter Palmer’s to a reception to the Princess Eulalie.  It was a very large reception.  The drawing room and reception room were separated by a red ribbon from the guests.  When the Prince and Princess came, Mr. and Mrs. Palmer met them at the door.  A heavy thunderstorm raged all the evening.  The Spanish party sat on a little dais in the parlor and the guests filed by in pairs and were presented.  We did not go.  After the presentation the royal party left at once.  Mrs. Palmer had set a supper for a certain number of distinguished guests but the Princess left – the party was shut off from the guests alone.  It was not a pleasant occasion.” 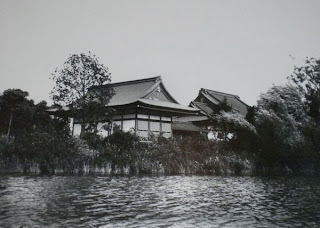 Private tour of the fairgrounds with Daniel Burham – June 17, 1893:
“We all went out to the Exposition to see the illumination and dine with Mr. Burnham.  We drove out then met in the service building.  Then we took Mr. Burnham’s launch.  We sailed around the lagoon – then some of the gentlemen got out but we declined – so they sailed around again.  They we drove in the wagonettes to the German village where we dined.  I sat between Mr. McKim and Frank Millet – besides these Mr. and Mrs. Peabody, Mr. and Mrs. Mead (architect), Mr. Coleman, Mr. Atwood, Kate Field, Mr. and Mrs. Burnham, Mr. and Mrs. Graham.  There were eighteen at table.  We had toasts.  After the dinner we drove again to the launch and sailed all of the evening.  It was a night to remember.  In the afternoon we all went by invitation to a glorious concert given in honor of Eulalie.  We were invited to the Thomas’ box.  Edward Lloyd sang.  The Apollo Club sang and the children’s chorus sang – the Princess came in for five minutes.  At the dinner that night Millet proposed the first toast, ‘down with royalty.’”

Assassination of Mayor Harrison - Saturday October 28, 1893:
“John and I went together to the Exposition.  We saw many things which we had not seen before.  John made an offer to John Wells for the beautiful silver tea set there.  John went to the Commercial Club dinner.  The dinner was interrupted and adjourned on account of the assassination of Carter Harrison at his home.”

Purchase of punch bowl – Monday October 30, 1893:
“I went to the Exposition with John.  We bought a beautiful punch bowl from Siam – silver and gold.”

The Fair is over – Wednesday November 1, 1893:
“We went to the Exposition.  It was exceedingly interesting to see the wonderful change that had come over everything.  It looked as though death had struck it.”
Posted by Glessner House Museum at 1:21 PM