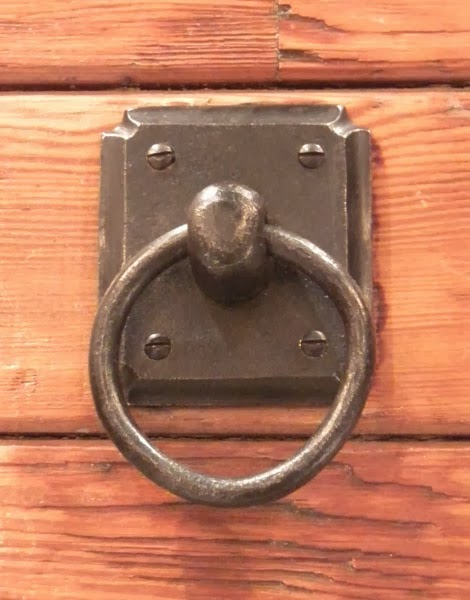 In October 2013, the museum installed four custom-made tether rings (hitching rings) in the coach house.  Based on the surviving evidence of the long-lost originals, the design and fabrication of the pieces served as the master’s thesis for a graduate student in the Department of Historic Preservation at The School of the Art Institute of Chicago.

Dana Oliveri possessed a background working as a bookbinder and conservator before starting in the preservation program, augmenting her studies with classes in sculpture and a focus on mold making and metalworking.  The idea for the project came from Anne Sullivan, Chair of the Historic Preservation Department, who had previously helped compile the Historic Structure Report for Glessner House in 1994 and oversaw the 2006 restoration of the coach house.

No historic photographs are known to exist showing the interior of the coach house, so Dana examined the surviving wood wainscoting for clues.  She discovered the impression of a back plate about 2.75” wide and 3.5” high with quarter-round chamfered corners, with a central boss that held a ring that hung about 2.5” below the center of the plate and was secured by four screws.  The original building specs make brief mention of the rings:

That information provided two pieces of information.  The reference to “best patent” indicated that the rings were not custom made but would have been ordered from a catalog.  The excerpt also referred to the Bower-Barff process for most of the metalwork; however the rings were not specifically listed as receiving that treatment, so the original finish remained unknown.

These pieces of information led Dana to the extensive collections of period building catalogs at the Avery Library at Columbia University.  Initially stumped when she found no examples of stable hardware in catalogs of metal suppliers, she eventually noted that farm and stable suppliers were listed under “Agriculture.” 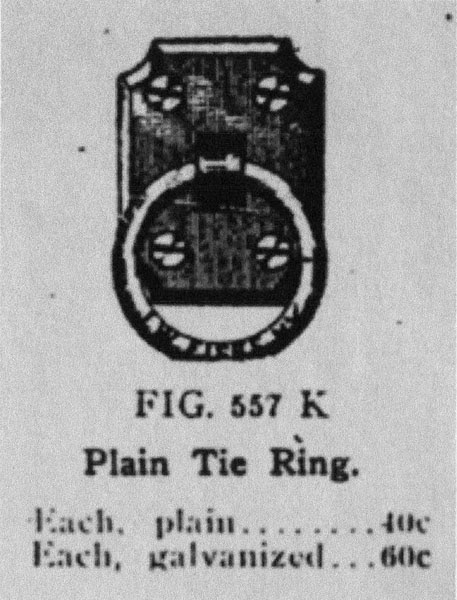 An undated Illustrated Catalog of Stable Fittings from the J.W. Fiske Company, an iron manufacturer headquartered in New York, produced an image of a ring and plate virtually identical to the one installed in the Glessner stable.  From this illustration a shop drawing was drafted matching the exact measurements found on the wainscoting.

One difference with the reproduction tether rings is that they are made of steel rather than iron.  Iron is no longer used and even period blacksmiths and traditional craft schools now use steel, except for rare instances when old wrought iron can be salvaged and reused.   The original back plates could have been cast or forged; Dana opted for forging the pieces as she could maintain more control over the process and would have ample time to correct possible mistakes.   Forging also provided a more historically accurate look with slight irregularities and surface textures.  However, electric and pneumatic grinders and power tools were used to shape the material and connect the pieces.

The boss was formed from 1” rod stock – grinding to shape the edges and then heating the rod in the forge and hammering the ends in a swedge block to create the appropriate finish.  The actual shaping of the boss involved three people as shown below, with Dana at left, shop assistant Natalie at center, and Dave Nelson at right striking the piece with a 5-pound sledge hammer.  After the piece had cooled, the hole was drilled for the ring, and the shoulder was created to insert into the back plate. 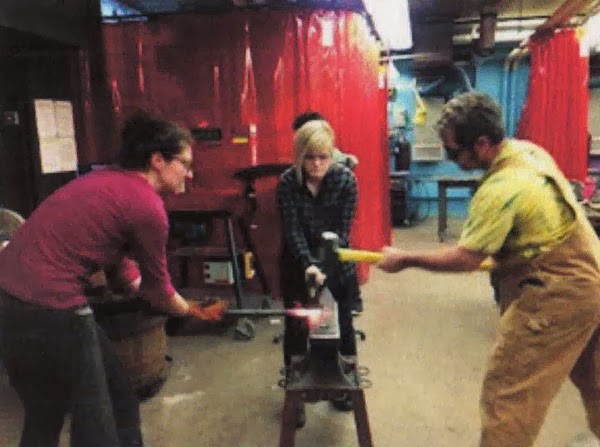 The back plate was formed from ¼” bar stock.  The quarter-round on the edge was created first, using a grinder to put a bevel on the edge and then a die-grinder with a small ball attachment to “scoop” out the edges.  Holes were drilled at each corner for the screws and at the center to receive the boss.  Then the two pieces were connected, welded and ground so that the back of the plates would be flush with the wall.

The rings were formed out of 5/16” diameter rod stock and were made using a “hardee fork” in the hardee hole of an anvil.  They were trued on a mandrel and then cut, reheated, and trued a second time. 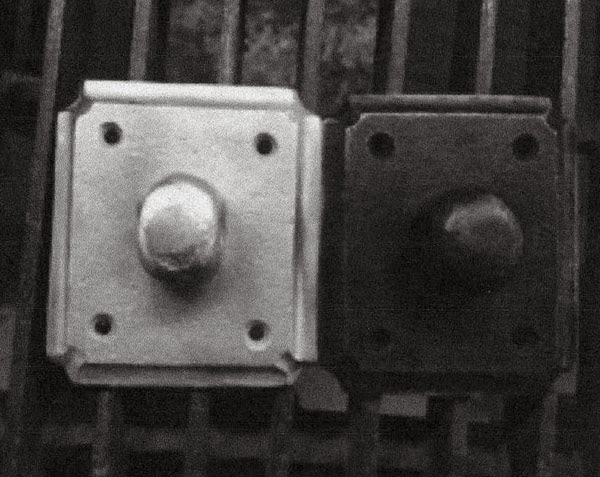 For the finish, Dana selected a waxed black oxide patina.  The oxide leaves a dark grey matte finish, similar to a forge finish, and the wax seals the metal and gives a light shine.  The finish is durable since the rings are installed inside and will be subject to minimal use.  The pieces were sandblasted to remove any dirt and grease and then wire brushed so that they would pick up highlights in the patina.  The black oxide was mixed with water and sprayed on, and then immediately rinsed.  The pieces were then heated with a torch and the Renaissance Wax was applied – two hot coats and one cold coat, after which they were buffed with a chamois.  Slotted oval head screws, appropriate for the period, were ordered in a black oxide finish as well.

The completed tether rings, installed on October 25, 2013, add a fine period detail to the coach house.  Visitors routinely ask questions about the configuration of the space and the presence of horses during the first 20 years the Glessners lived in their home.  The tether rings, which look as though they have always been in place, help visitors to step back to a time when the clip-clop of horses’ hooves on the concrete floor would have been the order of the day.