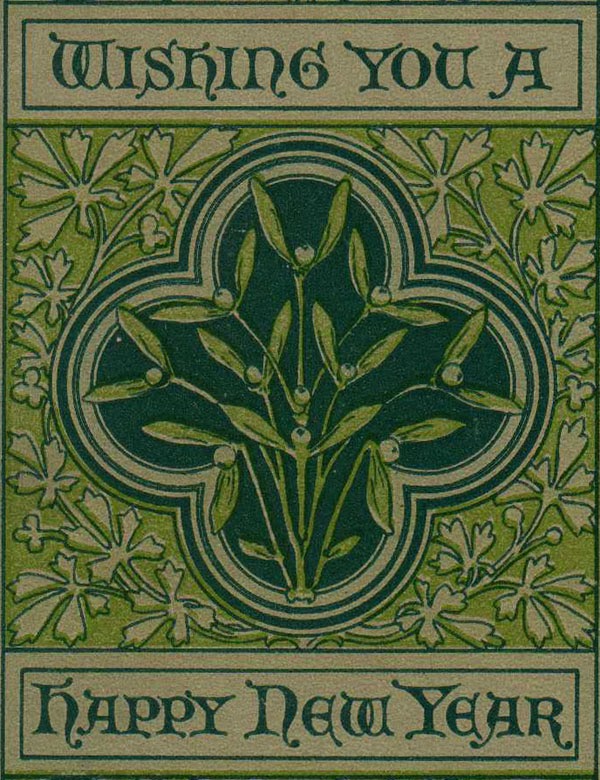 The sending of New Year’s Day cards was a popular custom in the late 19th and early 20th centuries.  Frances Glessner may have received more than her usual share of cards as January 1st was also her birthday (born 1848).  The museum collection includes four beautiful cards found inserted into a green leather scrapbook assembled by Frances Glessner, probably in the 1880s. 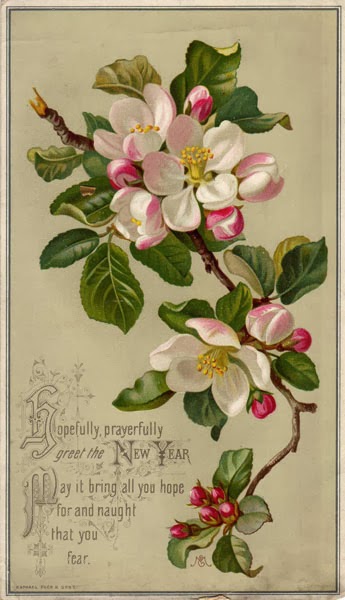 The first of these is a one-sided card featuring a sprig of apple blossoms with the greeting “Hopefully, prayerfully greet the New Year.  May it bring all you hope for and naught that you fear.”  The sender of the card is identified only as “C. G. C.”  It was printed by Raphael Tuck & Sons, a London-based company started in 1866.  Raphael Tuck was born in Prussia where he received training in graphic arts and pursued his interest in commercial art.  After moving to England with his family, he established the company with three of his four sons, and they became prolific publishers of greeting cards, pictures, gift books, and postcards.  Most of the color printing, known as chromolithography, was done in Germany.  The London headquarters of the company, known as Raphael House, was destroyed during World War II, taking with it most of the original artwork, and the company never fully recovered. 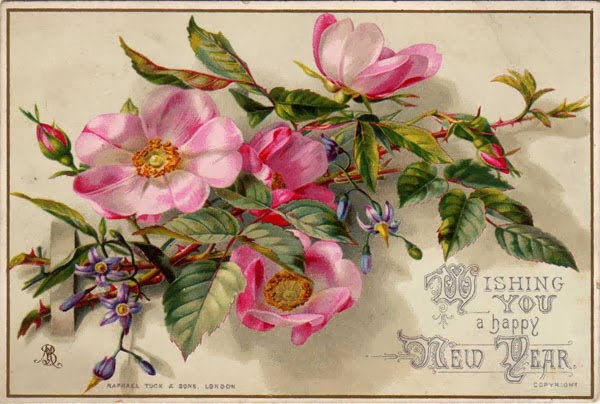 The second card in the collection was also printed by Raphael Tuck & Sons.  The small one-sided card depicts a branch of pink roses with the greeting “Wishing you a happy New Year.”  The back side of the card features a handwritten message which reads “For you and yours, dear Mrs. Glessner, the happiest of New Years.  Josie B. Gwynne.” 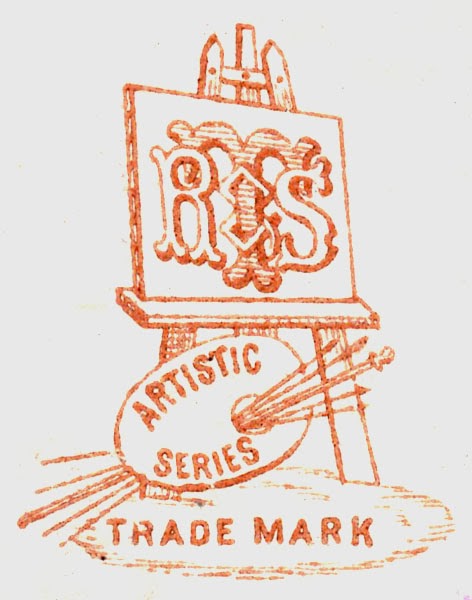 The back side of both Tuck cards features the logo of the company, consisting of an easel depicting “RT&S” and a small artist’s palette below which reads “Artistic Series.”  The company received many prizes for its work, and also sponsored competitions for collectors of their cards.  The prolific output of the company is demonstrated by the fact that the winner of the first competition had a collection of 20,364 cards. 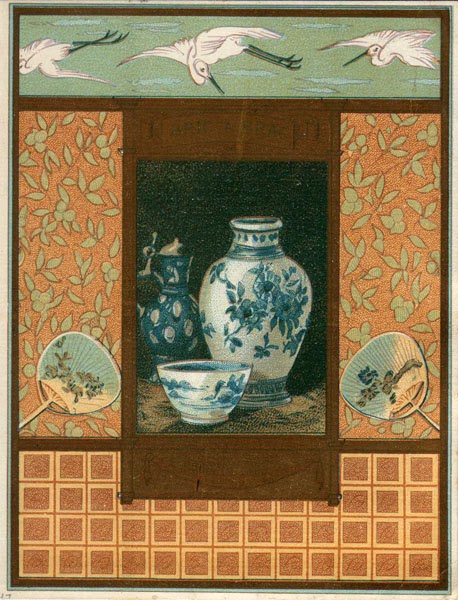 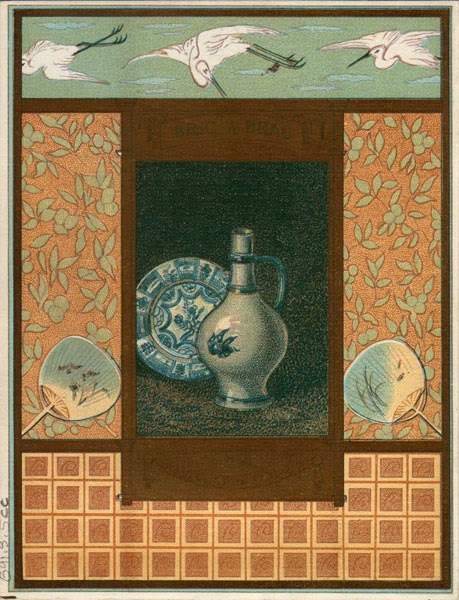 The third card is an elaborate folded card that would have appealed to Frances Glessner’s interest in Japonisme.  The front and back sides of the card feature vignettes of blue and white Japanese porcelains with the words “BRIC A BRAC” above.  A band of white cranes flies across the top, and Japanese fans are propped to each side of the main image. 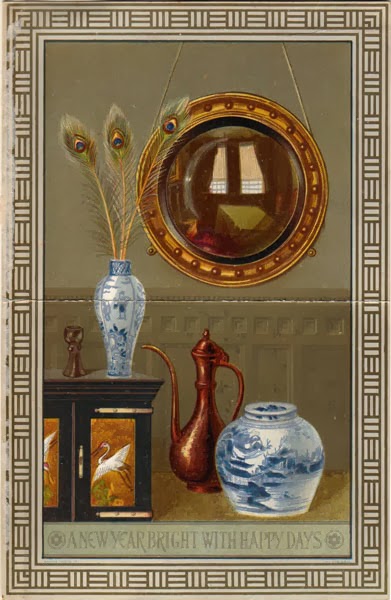 The inside features a much larger vignette with more blue and white porcelain (one vase holding peacock feathers), an ebonized cabinet with panels depicting more white cranes, a copper ewer (very similar to one owned by the Glessners and now displayed in the dining room) and a convex mirror hanging on the wall.  This image also bears the greeting “A NEW YEAR BRIGHT WITH HAPPY DAYS.”

This card was printed by Marcus Ward & Co., an Irish-based company formed in the early 19th century by John Ward.  John’s son Marcus took over the company in the 1830s and focused on color lithography, winning a medal at the Great Exhibition of 1851.  The firm began mass-producing greeting cards and calendars in the 1860s, with Thomas Crane as artistic director and artists including Kate Greenaway and Walter Crane as illustrators. 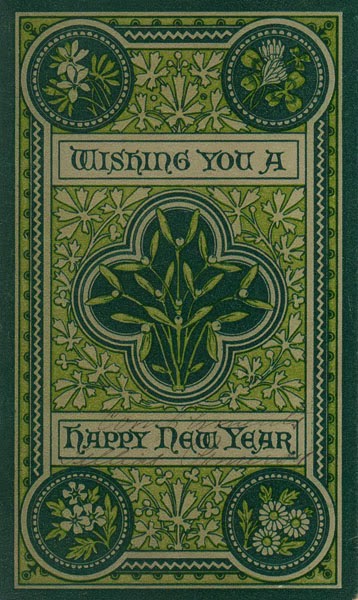 The last card in the collection was created by an unknown maker, but may be the most elaborate of all.  It was sent by a “Miss Pomeroy.”  The front and back covers are identical, with the greeting “WISHING YOU A HAPPY NEW YEAR” surrounded by beautiful Aesthetic Movement-inspired designs including medallions at each corner featuring different floral motifs (an idea often used by Isaac Scott in the creation of his picture frames). 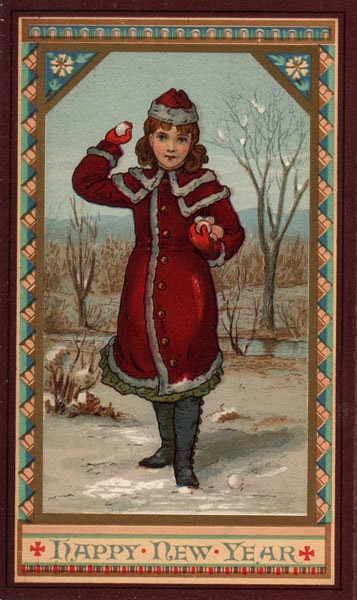 The left panel of the interior of the card features an illustration of a young girl dressed in a fur-trimmed red coat throwing a snowball, with the greeting “HAPPY NEW YEAR” underneath. 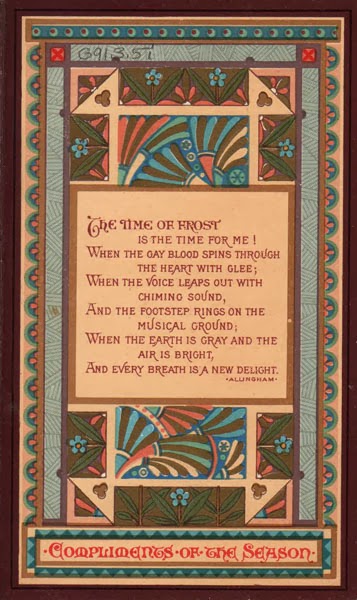 The right panel, with elaborate detailing around the border reads “COMPLIMENTS OF THE SEASON” at the bottom, and features part of a poem by William Allingham at center.  Allingham (1824-1889) was a well-known Irish poet, diarist, and editor with his best known work being “The Faeries.”  The greeting card includes the first stanza of his poem “Frost in the Holidays” and reads:

The time of frost is the time for me!
When the gay blood spins through the heart with glee;
When the voice leaps out with chiming sound,
And the footstep rings on the musical ground;
When the earth is gray and the air is bright,
And every breath is a new delight.

The four New Year’s Day cards, along with a selection of Christmas cards sent to the family, are displayed each year on the partner’s desk in the library during the holiday season.
Posted by Glessner House Museum at 10:37 AM