What was tiniest theater to ever operate in Chicago?  Even the most knowledgeable Chicago historians might not be aware of the short-lived Finger Tip Theater, which operated for less than two weeks in March 1918.  Conceived and created by Frances Glessner Lee, it followed by five years her work crafting the miniature Chicago Symphony Orchestra and predated by 25 years her well-documented efforts creating the Nutshell Studies of Unexplained Death.

As noted in a blog article on December 15, 2014, Lee was deeply involved in supporting the war effort during World War I.  She regularly entertained sailors from Great Lakes in her Prairie Avenue home, and later moved to Boston where she served as the resident manager of Wendell House, a dormitory for soldiers and sailors returning from Europe.  The creation of the Finger Tip Theater was another way in which she supported the war effort, in this case by raising funds for the Fatherless Children of France.

The Fatherless Children of France was organized in the spring of 1916 to provide relief for children under the age of sixteen whose fathers had been killed in the war.  As noted in the 1917 report for the organization:

“An essential feature of this plan is the maintaining of these children in their own homes.  In no other way can the French tradition, threatened with total extinction by the present desperate situation, be preserved.  It is therefore provided that each child shall be brought up by its own mother, or other qualified guardian, in the religion of its father and under conditions approximately normal.”

By the spring of 1918, nearly 180 committees had been set up in the United States and more than 65,000 children had found “foster parents.”  The Chicago committee, headquartered in the Fine Arts Building, had already provided support for more than 3,500 children.  An article in the March 17, 1918 Chicago Tribune noted:

“It costs only 10 cents a day to be established as an American foster parent of a bereft French boy or girl, and the satisfaction it gives to the giver far outweighs the money value of the $36.50 a year it costs you.  The adorable letters these adopted children write their American ‘marraines or marrains,’ the lovely photos they send of themselves bring a poetry, a romance into the life hitherto unknown to us matter of fact people.”

It was to raise funds for this worthwhile cause that Frances Glessner Lee devoted her efforts in creating the Finger Tip Theater.  The theater opened on March 19, 1918 in the large doorway between galleries 52 and 53 in the Art Institute of Chicago.  The stage measured just two by three feet with a proscenium 20 inches in height.  The stage was set within a frame draped with black muslin, and on either side were newel posts bearing bronze figures of “a huntress-goddess and her prey.”  Tiny scenes were created for each separate act during the show and were “perfect to the smallest detail.”

Lee’s announcement of the theater indicated “living performers only – no manikins” leading newspapers to speculate whether the performers would be dwarfs, trained fleas, or white mice!  In reality, the performers were “none other than the clever fore and middle fingers of Mrs. Frances Glessner Lee, who originated the new art.”

The Chicago Herald captured that fact in their headline the next day which read “Curtain Rises on Finger Tip Theater – Young Woman’s Talented Digits Star at Playhouse in Art Institute.”  The article continued:

“If she has talent in her finger tips (which she undoubtedly has), and tip-top talent at that, why not stage it?

“That is just what Mrs. Frances Glessner Lee has done, and if one has an imagination that will shrink and shrink (which we all undoubtedly have), one can see on this miniature stage the most complete panoramas and thrilling dances one could possibly desire.

“For instance, a ballet in one act is poetically rendered by Mme. Karsanoma, and she is quickly followed by Szopup Jynszlingski, who is Japanese and does a reverent deal of posturing before his adamant heathen god.  It is all very awe-inspiring, for in the foreground a bowl of incense is burning. 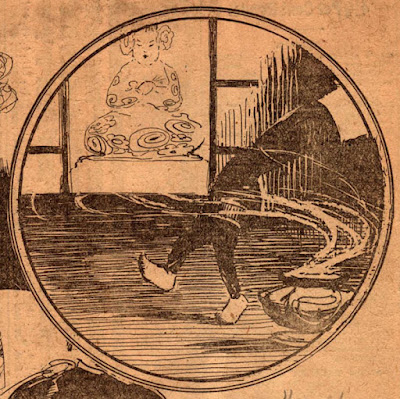 “The curls of blue smoke make his prayers to Buddha much more picturesque, and doubtless much more efficacious.

“All this is done by Mrs. Lee herself, and while one never would suspect it, these different terpsichorean stars are her own supple right hand.  It is true that in proportion to the size of the stage her hands assume Alice in Wonderland proportions.  But as each one of her two first fingers is daintily shod with ballet slippers and about her knuckles is a ruffle of tuile the performer passes as a finished product of the dancing master’s art.

“As the devoted Japanese she is no less successful.  The quaint shoes as well as the oriental bloomers and incense create an unmistakable effect.  But it must be seen to be fully appreciated.”

-Charlotte Russe, The Matchless, The Champion Glace Skater of the World, assisted by Axel Erickson, Late Skater-in-Chief to the King of Scandinavia

-The Amalgamated & Consolidated Circus Company of Kalamazoo and Oshkosh, Bigger, Greater, Grander and More Gorgeous than Ever – All Under One Tent!!  Wonder of Wonders!!  The Smallest Show on Earth!!

-Elmer, the elephant – the smallest trained pachyderm in captivity

-Signor Centrifugo, sensational slack wire specialist, who will set at defiance the laws of gravity

(The program also made the following note, “Ladies are requested to remove their hats – or keep them on.”  This, no doubt, was a humorous reference to the controversial house rule passed a few years earlier at the Chicago Symphony – and also adopted by Frances Glessner at her Monday Morning Reading Class – that all ladies must remove their hats.)

A total of ten performances were held over eight days with 50 people attending each, including Mrs. George Pullman and many of the leaders of Chicago society, netting $1,000 for the Fatherless Children of France. 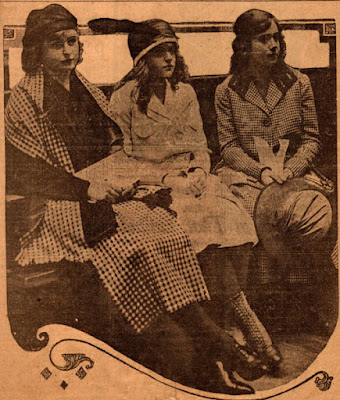 Frances Glessner Lee wrote a letter to the editor of the Chicago Tribune on March 26 which read:

“I send you my grateful thanks for the kind notices in your paper of my little Finger Tip theater.  The series of ten performances came to an end this afternoon.  The Art institute generously provided the rooms, lights, and service, and all other expenses were met by special contribution, so that the entire receipts, amounting to about $1,000, were turned over for the benefit of the fatherless children of France.  I am glad to have given my small efforts to this cause, and am grateful to you for your kind notices.  Frances G. Lee”

This brilliant production executed by Frances Glessner Lee was truly a “small effort” only in the size of the performers who entertained captivated audiences during the short run of the Finger Tip Theater.   A quarter-century later, those same nimble fingers would craft the Nutshell Studies of Unexplained Death for which she is chiefly remembered to this day.
Posted by Glessner House Museum at 9:35 PM