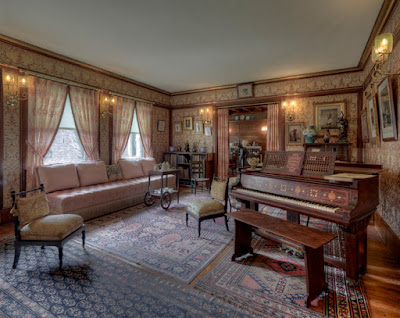 On Sunday October 4, 2015, George Radosavljevic, a member of the faculty at the DePaul University School of Music, will perform a recital on the Glessners’ 1887 Steinway grand piano.  Featuring works by Beethoven, Liszt, Chopin, Rachmaninoff, and Prokofiev, the performance is reminiscent of the many musical entertainments hosted by the Glessners.  In this week’s article, we will look at a musical given by Frances Glessner in 1890, at which the great pianist Fannie Bloomfield Zeisler was the performer.

FANNIE BLOOMFIELD ZEISLER
Fannie Blumenfeld was born in Bielitz, Austria (now part of Poland) in 1863 to Jewish parents.  When she was four years old, her family emigrated to the United States, and in 1870 they relocated to Chicago, where her father opened a dry-goods store.  She began her piano studies at that time and in February 1875, at the age of 11, gave her first public performance.  Three years later she travelled to Vienna with her mother to study under Theodore Leschetizky; she remained there for five years.

In 1883 she returned to Chicago by which time she had changed her name to Bloomfield.    She gave her first full concert in Chicago in 1884 and made her debut in New York the following year, the same year that she married attorney Sigmund Zeisler.  (Also a native of Beilitz, he earned his law degree at Northwestern University.  In 1886-1887, he served as the associate counsel for the defense of the Haymarket anarchists.) 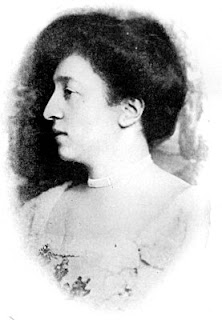 Fannie Bloomfield Zeisler was one of the featured solo artists at the World’s Columbian Exposition in 1893, receiving praise for her performances.  She then toured German cities, her first European tour, earning the reputation as a first-rank pianist.  Of her abilities, the Britannica Online Encyclopedia says, “Acknowledged as one of the foremost concert pianists in the world, she combined flawless technique with a fiery and powerful expressiveness that enabled her to render the classical and Romantic masterworks with entire authority.”

She made several additional tours through Europe and made annual tours of the United States, performing each season with Theodore Thomas and the Chicago Symphony Orchestra.  Together they championed the German repertoire.

She gave her final performance in Chicago in 1925.  Her program included Beethoven’s Andante favori which she had played at her first public performance 50 years earlier, as well as concertos by Chopin and Schumann.  She died in Chicago on August 20, 1927.

A biography, entitled Fannie Bloomfield Zeisler: The Life and Times of a Piano Virtuoso, written by Beth Abelson Macleod, was published by the University of Illinois Press in July 2015. 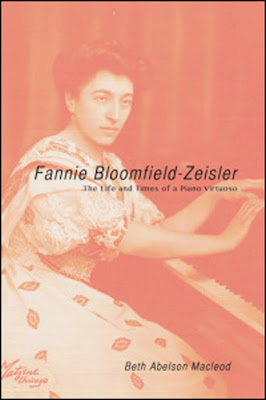 THE PERFORMANCE
In late November 1890, Frances Glessner wrote to Fannie Bloomfield Zeisler asking her to give a recital in her Prairie Avenue home.  She received the following reply, dated December 4th:

I received your kind letter and turned it over to my manager, who will write you about dates and terms.

I am not in the habit of accepting such engagements, but I do so at rare intervals and should be pleased to play in your home, as I know you to be one of the few really musical patronesses of my art in Chicago.

The musical was set for Friday December 19, 1890.  Frances Glessner sent invitations to 103 ladies, of which 75 attended.  As Glessner noted in her journal:

Fanny Bloomfield Zeisler played most splendidly – I never heard better playing.  She said she was inspired by the audience – they were most appreciative – she played a half hour then took a short rest, then played another half hour, then we had our breakfast – it was all prepared in the house and was delicious.

Unfortunately Frances Glessner did not record the program but she did note the breakfast menu:

Tables seating six were set up throughout the first floor and were presided over by Mrs. Carpenter, Mrs. O. R. Keith, Mrs. Edson Keith, Mrs. A. A. Sprague, Mrs. Otho Sprague, Mrs. Charles Hutchinson, Mrs. Dudley, Mrs. Potter, Mrs. William Armour, Mrs. George Armour, Miss Lunt, and Mrs. Stone.  The ladies “all were beautifully dressed, wore no hats – and, helped me to make everything go smoothly.”  Fannie Bloomfield Zeisler sat to Frances Glessner’s right at the main table.  The flowers were live violets, a large dish on the main table, and a pot on each of the smaller tables, wrapped in green crinkled paper and tied with violet ribbons. 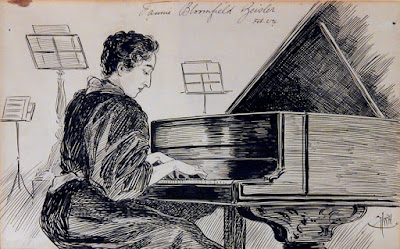 LATER YEARS
Fannie Bloomfield Zeisler became a good friend and was a frequent guest in the Glessners’ home, and, of course, the Glessners attended her many performances with the Chicago Symphony Orchestra.  In February 1896 she presented Frances Glessner with a signed drawing done by Harold R. Heaton, cartoonist for the Chicago Daily Tribune.  Frances Glessner hung the picture on the wall along with other photos and drawings depicting many of the musicians she welcomed into her home through the years.
Posted by Glessner House Museum at 7:22 PM