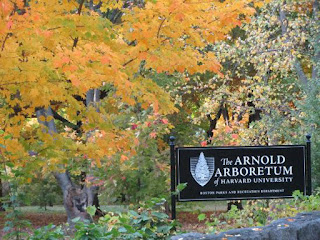 Exactly 125 years ago this week, Frances Glessner noted in her journal a trip to the Arnold Arboretum in the Forest Hills section of Boston, while traveling from her summer estate in New Hampshire back to Chicago.  Of the visit on October 13, 1890, she wrote:

“Yesterday morning (Isaac) Scott called early and took Lettie and me to see the Arnold Arboretum.  We went by train to Forest Hills and walked over the Arboretum.  It was most interesting and delightful.  The roads are all beautifully laid in this suburb with a nice side walk, beautiful winding roads, great trees and green grass.”

Arnold Arboretum was established in 1872 when the executors of the estate of whaling merchant James Arnold donated a portion of his estate to Harvard College for the establishment and support of an arboretum.  Charles Sprague Sargent (1841-1927) was appointed the first director the following year and served for 54 years, creating an institution that became a model for other cities across the United States and the world. 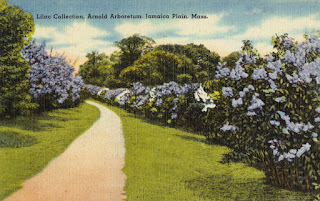 Sargent was responsible for the 1,000 year lease whereby Harvard retained ownership of the land, but the arboretum became part of the Boston park system known as the “Emerald Necklace,” a seven-mile-long network of parks and parkways laid out by Frederick Law Olmsted between 1878 and 1892.  The design of the arboretum itself was a result of Sargent working closely with Olmsted, who laid out the general plan of paths and roads, and the groupings of plants. 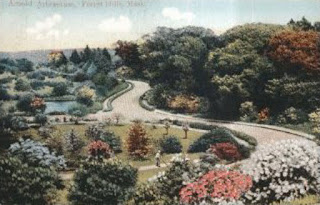 The arboretum covers 281 acres and includes nearly 15,000 accessioned plants, as well as an herbarium collection of more than 1.3 million specimens and an important research library containing in excess of 40,000 volumes.   Two years after Frances Glessner’s visit, the administration building was designed by Alexander Wadsworth Longfellow, Jr. of the firm of Longfellow, Alden and Harlow.  Longfellow was working in the office of H. H. Richardson at the time the Glessner house was designed, and was later a guest of the Glessners in their Prairie Avenue home.

Forest Hills is a part of the Jamaica Plain neighborhood of Boston, noted for its hilly terrain and wooded areas.  The area south of Walk Hill Street in particular is characterized by curving tree-lined streets laid out in irregular patterns, the result of the gradual transformation of the area from country estates to a “streetcar suburb.”  Forest Hills is surrounded by the three final “links” of the Emerald Necklace – Arnold Arboretum, Arborway, and Franklin Park.  In addition, it is home to the sprawling 275 acre Forest Hills Cemetery, considered one of the finest 19th century rural cemeteries in the country.

A section of Forest Hills, known as the Woodbourne Historic District, was listed on the National Register of Historic Places in 1999 and features a plan laid out in part by Frederick Law Olmsted, Jr., who would have been attending Harvard as a classmate of George Glessner at the time Frances Glessner visited the area in 1890.

For more information on the arboretum, visit http://www.arboretum.harvard.edu/.
Posted by Glessner House Museum at 1:27 PM