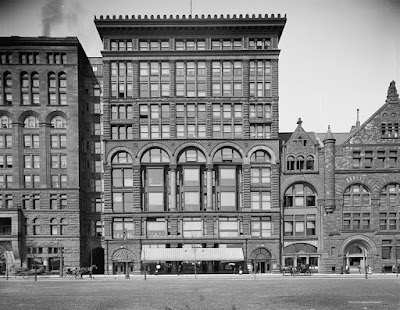 In the first decades of the 20th century, the norm was for men and women to have their own separate clubs.  This did not mean, however, that the clubs for the opposite sexes might not have similar purposes.  Such was the case with The Cliff Dwellers and Cordon Clubs.

A well-known fixture in Chicago for more than a century now is The Cliff Dwellers Club.  Founded in 1907 as the Attic Club, and renamed two years later, the goal of the club was to bring together men engaged in and supportive of the fine arts.  John Glessner was a member, as were leading artists, authors, and architects including Louis Sullivan.  For decades the Club occupied quarters on the top floor of Orchestra Hall (now Symphony Center); since 1996 they have been perched atop the office building at the southwest corner of Michigan Avenue and Adams Street.

Forgotten to many is the fact that the women of Chicago had a similar club that occupied nearby rooms in the Fine Arts Building at 410 S. Michigan Avenue.  This week marks the 100th anniversary of the opening reception of the Cordon Club, of which Frances Glessner was a member.

Caroline Kirkland, the long-time society columnist who wrote under the name “Madame X” for the Chicago Tribune (she was a close friend of Frances Glessner) provided a good overview of the opening of the club in her article dated Sunday October 24, 1915.

“The much discussed Cordon, the feminine counterpart of the Cliff Dwellers, is to have its opening reception next Thursday afternoon in its highly artistic rooms on the seventh floor of the Fine Arts building.  It is an interesting and promising undertaking, purporting to be a club for purely social purposes and consisting largely of women with some profession or definite calling in life.

Under this caption Mrs. Hobart Chatfield-Taylor is entered on the lists as a bookbinder, Mrs. Tiffany Blake as an expert landscape gardener, Mrs. Robert McGann as a painter, and Miss Helen Birch as a musical composer.

The membership is limited to 400.  It is full now, with a long waiting list of candidates.  It is about evenly divided between women who “do something” and those who lead merely domestic and social lives.  Perhaps the professional women predominate.

The club aims to provide a pleasant gathering place for the members and their friends where they can meet and have luncheon, dinner, or afternoon tea.  The rooms are decorated in the style of the Italian renaissance, modified by modern ideas of comfort and convenience.

In choosing this period of art as the background for the club’s social life, its president, Miss Clara E. Laughlin, was governed by the thought that in the time of the Italian renaissance women played a larger, more important part in Italian life than ever before – or ever since, one might safely say.  They exercised a sway in politics and the world of learning which makes this period to the student one of the most interesting in history.

So, as far as possible, the ideas that governed the furnishing of interiors at that time are carried out in the rooms of the Cordon.  They have a fine copy of a cinque cento fireplace; also an excellent production of a medieval Italian doorway is one of the features of the main club room.  High, somber wainscoting is the background, and the general effect is rich and harmonious.

The name was chosen because the French word “cordon” means many strands woven together.

The club maintained their quarters in the Fine Arts Building for decades.  An article in the Chicago Tribune dated October 20, 1948 noted that the club rooms had been recently redecorated:

“Coral predominates in the new color scheme, and charcoal gray and mist green have been used for accent.  Old furniture has been transformed with slip covers, and several new pieces have been added, including mirrors, lamps, and tables.”

The Cliff Dwellers Club began admitting women many years ago, and in fact, the club has had a woman president.  So the idea of a separate club just for women seems a bit foreign to many of us today.  But in its day, the Cordon Club filled an important niche in the social and artistic life of Chicago. 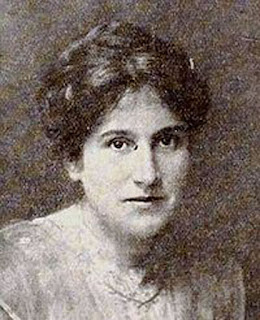 Note:  The first president of the club, Miss Clara E. Laughlin was a prominent writer, editor, and later a radio personality.  Born in New York City in 1873 she lived most of her life in Chicago, graduating from the Chicago High School in 1890.  She wrote over three dozen books including biographies of Sarah Bernhardt, Ferdinand Foch, and James Whitcomb Riley, as well as her autobiography.  In addition, she wrote extensively for the Ladies Home Journal.  She died in 1941.
Posted by Glessner House Museum at 4:22 PM