Heating Glessner House - Then and Now 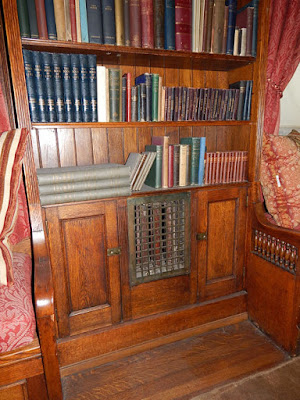 As the cold winter winds descend upon our city, we are provided with an opportunity to reflect upon how our forefathers kept warm.  The Glessners’ home, known for its modern design by H. H. Richardson, was also modern in terms of the technology it employed, including, for its day, a state-of-the-art heating system.

It is appropriate to reflect back upon the historic heating system of the house at this time, as the museum is currently having a 21st century state-of-the-art geothermal system installed.  For the past four weeks, crews have been working to dig two 500 wells in the courtyard, and to connect those wells to an elaborate system which will provide not only heating, but for the first time in the house, cooling and humidity control.  Extensive new insulated duct work is being installed to maximize the efficiency of the system and to take into account condensation that could occur during the cooling season.  This initial phase of the system will handle the first zone in the building which includes the parlor, dining room, kitchen wing, and adjacent servants’ hallways.  As funds become available, seven additional zones will be brought on line, ultimately resulting in the entire building being services by the geothermal system.  For more information on the new system being installed, read the current article at the Historecycle website.

Although little remains of the original heating system other than register covers, the museum is fortunate to possess the “Specifications for a combined direct and indirect radiating, two pipe, low pressure, gravity return Steam Heating and Ventilating Apparatus for dwelling for Mr. J. J. Glessner, 18th St. and Prairie Ave.” prepared in 1886 by Richardson’s office.  The handwritten document is nine pages long, and details every component of the system from the boiler to the trimmings, and ducts to registers.

The 20 horse power locomotive fire box boiler was located in the cellar beneath the north half of the coach house.  Of the system, John Glessner said in his 1923 “The Story of a House”:

“The heating is from the furnace room under the garage (formerly called the Coach House), thus avoiding the dust and dirt and noise of coal and ashes in the house – a hot water system it is, admirable for the time when it was put in.” 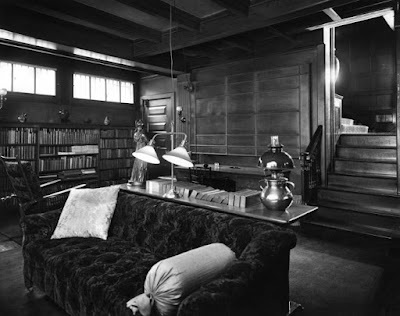 The system was a combination of direct and indirect radiation.    With direct radiation, the furnace would heat the hot water and the gravity system would then take the heated water to the eventual destination (hot water is lighter than cold water).  Rooms heated with radiators included the school room (shown above – the radiator is behind the large brass cover on the north wall); the butler’s pantry, and the first floor toilet room; and three male servants’ bedrooms on the second floor over the stable.  The radiator in the butler’s pantry served the double purpose of radiation and plate warmer.  The plate warmer closet was lined with tin and furnished with perforated, adjustable galvanized iron shelves.

The balance of the house was heated by indirect radiation or what is known as convection (gravity flow system).  It’s the same as in the hot water system except the air is being heated which will then flow through the supply vents and return to the furnace through cold air return vents usually placed near the ceiling.  This system was used on the first floor in the parlor, dining room, living hall, library, bedroom, two dressing rooms and bath room.  On the second floor there were vents in the four bedrooms, two dressing rooms, bathroom, hall, corridors, servants’ bathroom and conservatory.  There was also a vent in the carriage room on the first floor of the Coach House.  It is interesting to note that in historic photos, the registers are frequently covered over with a piece of light fabric, possibly to cut down on dust and soot (note the floor register in the image of the corner guestroom below). 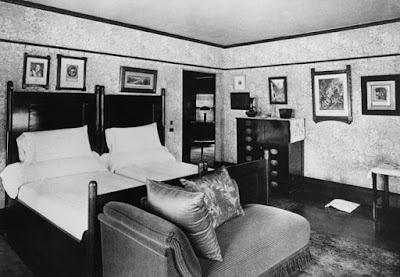 The indirection radiation was of cast iron, with coils suspended from the basement ceiling by heavy wrought iron hangers.  A portion of one of these units remains in place on the ceiling of the ramp leading to the cellar under the coach house (shown below). 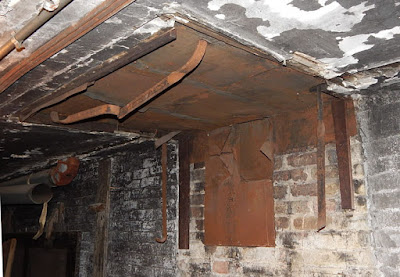 A gravity system does not provide the same level of heat that we are accustomed to today with forced air systems.  As such, the fireplaces throughout the house were still an important part of keeping the house comfortable, and portieres and pocket doors would be used to contain the heat in the occupied rooms.  John Glessner noted that in the dead of winter, it was hard to maintain a temperature in the house above 60 degrees.  As such, some years after the original installation, radiators were added to a number of the rooms. 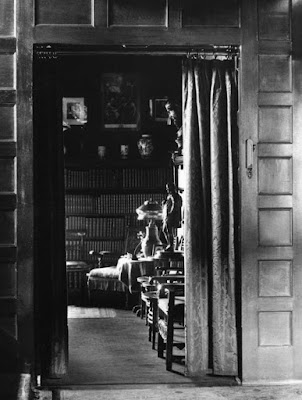 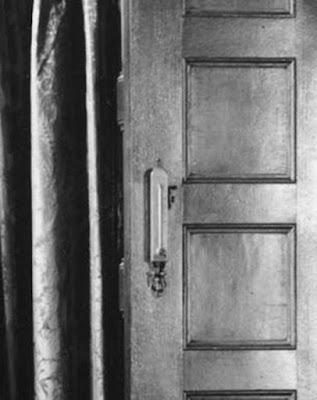 The heating system was controlled by a thermostat mounted to the oak paneling in the main hall immediately to the right of the doorway leading into the library (visible in the photos above).  That thermostat was removed many years ago but a historic replacement was installed early this month. 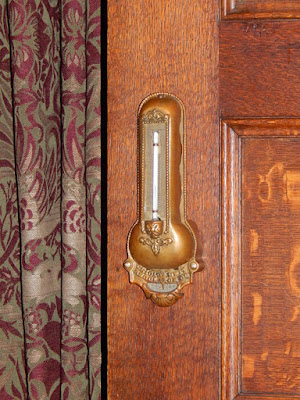 That thermostat (shown above) was manufactured by the Chicago Heat Regulator Company, organized in 1904.  Although not identical to the original, it is quite similar, and reminds visitors that there was, in fact, a central heating system in the house when it was completed in 1887.

The Glessner house system was designed and installed by Frederic Tudor, a prominent Boston sanitary engineer and expert in ventilation.  Tudor, who maintained a Chicago office at 273 Dearborn Street, submitted a proposal for the work in July 1886 with revisions made at the architect’s request the following month.  Tudor was paid a total of $4,035.02 for labor and materials. 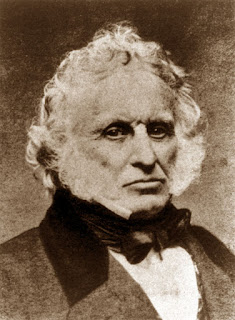 Tudor was born in 1845, the eldest son of Frederic Tudor, the “Ice King.”  The senior Frederic made his fortune harvesting fresh water ice in Massachusetts and shipping it around the world to places as far away as India.  The idea came to him after a trip to the Caribbean, and the first successful shipment of ice was sent to Martinique in 1806.  Frederic Tudor, the son, as a member of a Boston Brahmin family, attended Harvard College and was a member of one of the first graduating classes at St. Paul’s School in Concord, New Hampshire. 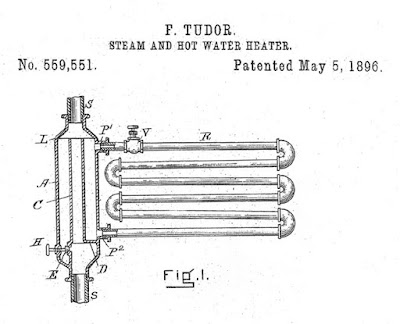 Tudor received several patents for his innovations, and was well-known and respected both in the United States and Europe.  Not surprisingly, he had worked on a number of earlier buildings by H. H. Richardson including the New York State Capitol at Albany, Sever Hall at Harvard, the Cincinnati Chamber of Commerce, and the Allegheny County Courthouse in Pittsburgh, Pennsylvania.

Following his death in 1902, The American Architect and Building News, for which he was a frequent contributor, ran a lengthy article about his contributions to the development of modern heating and ventilation systems.  A few excerpts from the article, published February 11, 1903, are reprinted below:

“Today is the anniversary of the birth of Frederic Tudor, sanitary-engineer and expert, well known to architects and civil-engineers through the United States and Europe, in whose death this community met with great loss.  Mr. Tudor was a pioneer in ventilation and sanitation of dwelling-houses and public buildings, an occupation in which he sacrificed his time, his health and his fortune.

“Some of his best work was shown in the Cancer Hospital and the Metropolitan Opera House in New York City; the Capitol at Albany; the Walker Building of the Massachusetts Institute of Technology of this city.  All these buildings have long been noted for their practically perfect systems of ventilation and heating.  The Cancer Hospital and Metropolitan Opera House are ventilated by essentially the same system – the former being acknowledged to be the most perfectly ventilated hospital in the world.

“When the project of building a new Boston Public Library was decided upon, Mr. Tudor was called in to draw up plans for the heating and ventilation.  On the opening night of the Library the hundreds of people who were present discovered that, although the thermometer outside registered nearly zero, the temperature and circulation of air in the building were perfect.  Expressions of praise were heard on all sides, and on the following day articles appeared in the daily press, complimenting Mr. Tudor upon the success of his plans and system.

“The vapor-system of heating, so-called, was invented by Mr. Tudor, and is to-day used extensively throughout Germany and France, sanitary-engineers in those countries giving him entire credit as its originator.  Only with the last two or three years have American engineers properly appreciated the value of economy of operation as revealed in Mr. Tudor’s system.

“Mr. Tudor’s services to his profession have gradually become better understood, and the public will no doubt in time learn to remember the name of one who was the pioneer in inventing and developing systems and devices for supplying modern homes and public buildings with abundance of fresh air and temperate heat, both essential to health and comfort.  As a result of seventeen years thought and experiment, he perfected shortly before his death a plan of low-pressure steam-heating, known as the “thermograde system,” which is now being used in Randolph Hall, Cambridge; Apthorp House, Cambridge; Hampden Hall, Cambridge, and the Beaconsfield Casino, Brookline.”

It is not surprising that Richardson and the Glessners would have chosen Frederic Tudor, clearly a leader in his field, for the design and installation of the modern heating system to be installed in their modern house.