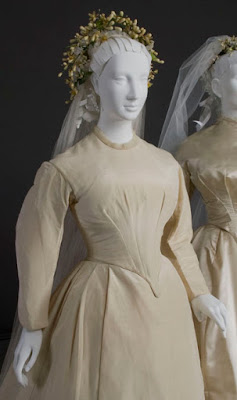 On December 7, 1870, exactly 145 years ago today, Frances Macbeth and John Jacob Glessner were united in marriage.  The event marked the end of a seven year courtship and the beginning of a loving marriage that lasted nearly 62 years.

Frances Glessner began her journal with a brief but detailed entry regarding her wedding: 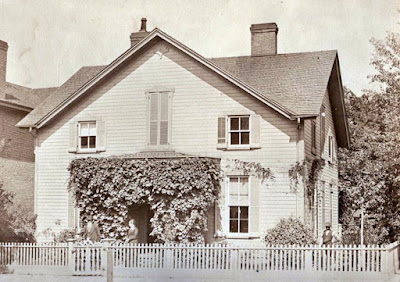 The home of Frances’ parents, James and Nancy Macbeth, stood at the northeast corner of Limestone and Pleasant Streets in Springfield, Ohio, and it was here that Frances had grown to adulthood.  In 1863, John Glessner came into this home, being run as a boarding house by Mrs. Macbeth, and was first introduced to his future bride, who at the time was 15 years old.  He “continued living with these gentle folks” until the time of his marriage. 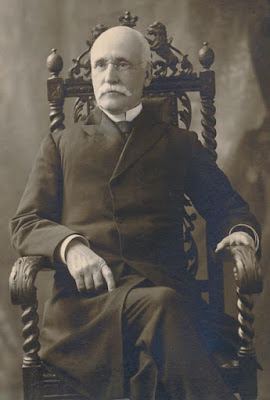 (As an interesting side note – Rev. Mowry, pastor of the Second Presbyterian Church in Springfield, also performed the wedding of the Glessners’ daughter Frances when she wed Blewett Lee in February 1898, the ceremony taking place in the parlor of 1800 S. Prairie Avenue).

In a tribute written by John Glessner shortly after his wife passed away in October 1932, he noted:

“We never were engaged to be married.  No word was said about it, but she knew and I knew that we would be when the time was favorable.” 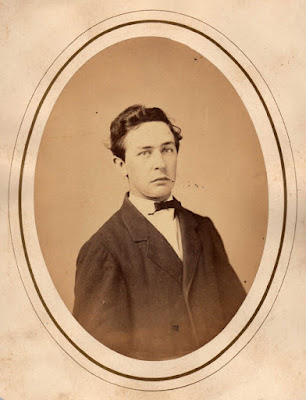 That decision revolved around John Glessner’s success in business which began in 1863 when he went to work for a farm machinery concern in Springfield known as Warder & Child.  Three years later, the company was reorganized as Warder, Mitchell & Company, and John Glessner was taken in as a junior partner.  In 1870, Glessner approached Mr. Warder and asked that he be allowed to go to Chicago and take charge of the firm’s business there, with the understanding that he would have “complete control.” With those arrangements in place, and his promotion to a vice president, he and Frances Macbeth made arrangements to be married. 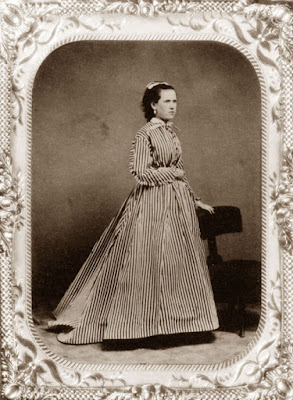 About thirty guests were present for the ceremony, including members of both the Glessner and Macbeth families, business associates of John Glessner, and a small number of friends.

Frances Glessner listed the gifts received at the wedding, the most substantial being a check in the amount of $100.00 received from John Glessner’s parents, along with a Bible.  Most of the other gifts were various items of silver including flatware, butter dish, knife, bell, caster, water pitcher, cake basket, salt cellars, tea tray, sugar bowl, berry dish, and various specialized utensils for preserves, salad, pickles, sugar, and ice cream. 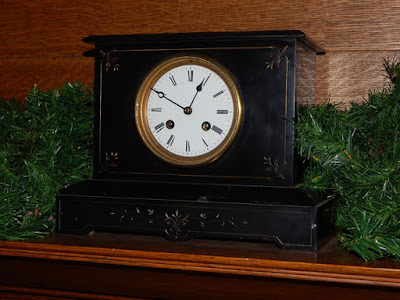 Mr. and Mrs. Benjamin Warder gave the couple a clock, which is still displayed on the mantel of the master bedroom.

At 5:00pm, the couple departed Springfield “in a rain storm” and went to Zanesville, Ohio where they stayed for about a week with John Glessner’s parents, Jacob and Mary Glessner. 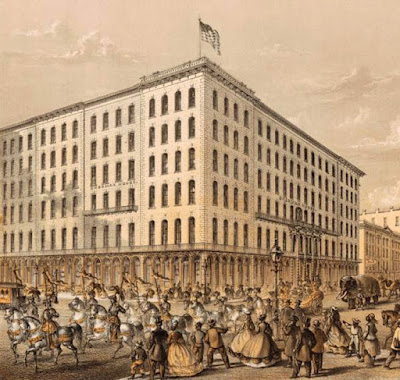 On December 15, 1870, the couple arrived in Chicago and spent their first week residing at the Sherman House, located at the northwest corner of Clark and Randolph Streets.  After several days staying with friends, they moved into their first home at 69 Park Avenue on December 28th.

Many years later, John Glessner reflected back on his selection of his bride.  As he wrote in 1923 in The Story of a House:

“A story apropos:  A dear old lady once said to me in all seriousness, ‘Mr. Glessner, you are a very important member of this community; you have a position of great prominence and influence; you get it from your wife and your house.’  Don’t think this disparagement of me.  I thought it a real compliment, for I selected the one and I built the other.” 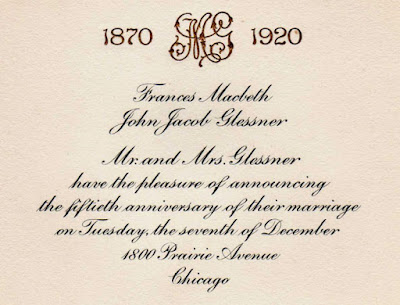 In 1920, the Glessners celebrated their 50th wedding anniversary, although in typically humble style, they did not announce the event in advance, as they felt it was merely a request for gifts.  Instead they hosted a debut tea for their granddaughter Frances Glessner, who celebrated her 20th birthday that same day.  It was only after guests had arrived that they learned the date was also the Glessners’ golden wedding anniversary.  Sixteen of the guests joined the family and remained for dinner including Mr. and Mrs. Cyrus McCormick, CSO music director Frederick Stock and wife, and Art Institute president Charles Hutchinson and wife.
Posted by Glessner House Museum at 1:33 PM