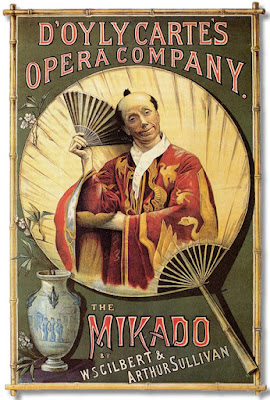 On March 14, 1885, the D’Oyly Carte Opera Company premiered Gilbert and Sullivan’s operetta, The Mikado, at the Savoy Theatre in London.  Cleverly satirizing British politics and institutions by disguising them as Japanese, the production also reflected the growing interest and influence of Japanese art, fashion and aesthetics on western culture. Enjoying enormous popularity, The Mikado ran for 672 performances, the second longest run of any musical theater production up to that time.  By the end of the year, it was estimated that 150 companies in Europe and America had staged the production.

THE MIKADO COMES TO THE UNITED STATES
The authorized American production opened at the Fifth Avenue Theatre on August 19, 1885.  In the late 1870s, theater manager John T. Ford had entered into an agreement with the D’Oyly Carte Opera Company to stage the official productions of Gilbert and Sullivan operettas, beginning with H. M. S. Pinafore.  The world premiere of The Pirates of Penzance took place there in 1879.  The theatre also gained distinction as being the first in the world to offer air conditioning, produced by blowing air over huge blocks of ice. 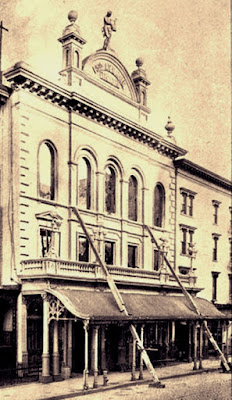 The Glessners stopped in New York while returning from their summer estate, The Rocks, in late September 1885.  Frances Glessner noted in her journal on September 30th, “In the evening we went to the 5th Ave. theatre to hear and see the Mikado – excellent.”

CHICAGO
Not surprisingly, The Mikado made its way to Chicago soon after.  Less than two months after seeing it in New York, Frances Glessner noted in her journal on Thanksgiving Day, November 26, 1885, “I took the children to McVicker’s to see the Mikado.” 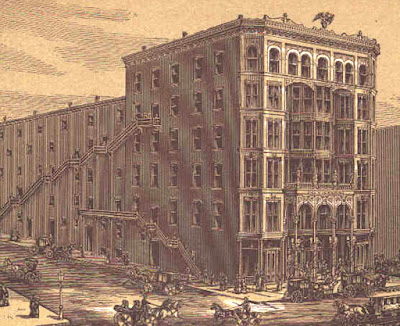 McVicker’s Theatre was one of the oldest in Chicago, dating back to 1857, and rebuilt after the Great Chicago Fire.  It had been extensively remodeled by Adler & Sullivan in 1883 as seen in the image above.  It burned in 1891, but was rebuilt twice, finally being torn down in 1985, after declining into a third-rate movie house.

A MIKADO BALL
The most legendary social event ever held on Prairie Avenue was the Mikado Ball, held at the home of Marshall Field on New Year’s Day 1886.  Designed as a party for Marshall Field II and his sister Ethel, aged 17 and 12 respectively, the party reportedly cost their father $75,000.  Sherry's, the exclusive catering firm in New York, provided two private railroad cars full of silver, china, linen, and food.  Special calcium-vapor lights were installed to illuminate the exterior of the Field House, as well as several blocks of Prairie Avenue.  The Chicago Tribune carried an extensive account of the elaborate decoration of the house: 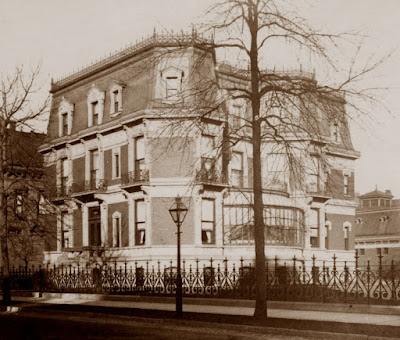 “Mr. Marshall Field’s residence at No. 1905 Prairie avenue was the scene last evening of the first complete ‘Mikado’ ball yet given in America.  It has been the custom of Mrs. Field to have a Christmas-tree party for her children and their little friends, but her son having reached the age of 17 she determined to celebrate it by giving an entertainment of a more mature character than a tree party.  Accordingly the idea of a Mikado ball was conceived and brilliantly executed.

“Of course everything was purely Japanese.  There was such a bewildering mass of rich and costly stuffs that no detailed description could be well given.  The front entrance was closed and hidden by a large copy of the landscape background of the second set of the Mikado as presented by the original Mikado company at the Fifth Avenue Theatre.  Other scenery and borders divided the hall at the centre into an octagonal Japanese court.  Upon one side of this court was erected a miniature pagoda which was occupied by the musicians – Johnny Hand’s orchestra.

“In front of the winding stairway at the extreme rear end of the hall stood an enormous bronze stork with uplifted beak.  Before the stork stood a screen in variegated colors.  The stairway banisters and railing were obscured by hangings.  Above all was an enormous Japanese parasol and swinging paper lanterns, together with a number of film silk lanterns containing electric lights.

“All of the doors had been taken off their hinges and in their place were hung the swinging fringe curtains of beaded wood, ivory, and glass used for doors by the wealthy of Japan.  The walls of the halls were hung thickly with satin and bamboo screens.  The ceilings, like the ceilings of all the rooms, were nearly concealed from view by lanterns of every possible color and design.

“The walls of the octagonal reception-room were entirely covered with Japanese tapestries in imperial black and gold, while here and there stood bronzes and porcelains.  The walls and ceiling of the yellow room were almost hidden by screens, and banners, and festoonings of stuffs in silk and satin.  There were also in this room three superb screens, one in inlaid wood and ivory representing the god of children.  Another was of bronze and the other was of varied colors.

“To the rear of the yellow room and connected with it by a large open arch was the ball-room.  At one end, beneath another immense parasol, stood two immense Japanese flower trees in full bloom, made by a Japanese artist.  They were the first of the kind executed in the country.  The flowers were distributed as a portion of favors at the german.  There were heaps of favors of other descriptions.  There were toy animals, lanterns, parasols, slippers, storks, etc.  Two of the favors were especially rich.  One was of peacock feathers and a satin sash, the other a flower and lantern.  These were especially designed for Mrs. Field by Whistler, the London artist.

“The conservatory had been emptied of its plants and flowers and in their place were lanterns, screens, vases, etc.  The floors were heaped with Oriental rugs.  The fountain had been removed and upon its site stood a table bearing a mammoth punch-bowl, and silver urn, and cups.”

The party began at 6:00pm, with 200 friends of Marshall Field II and an equal number of friends of sister Ethel, all of whom arrived in full Japanese costume.  In addition to Chicago friends, children travelled from Boston, New York, Philadelphia, Baltimore, Cincinnati, and elsewhere to participate and “do honor to their hosts.” 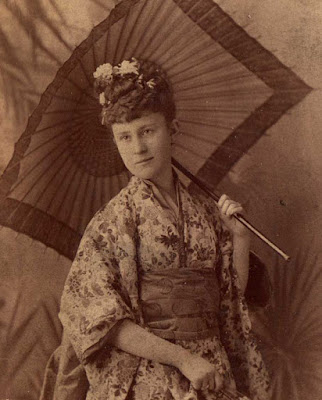 Notables, as recorded in the Tribune, included Mr. Richardson of Boston, Miss Woodhouse of New York, and Miss Pendleton of Cincinnati. 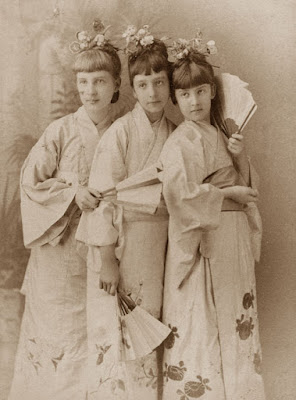 Ethel Field (at center) with friends Alice Keith
and Florence Otis, as the "Three Little Maids"

After the children had all arrived, they were posed in tableaux before the pagoda and were photographed.  Then followed hours of dancing to music from The Mikado, as well as all of the other Gilbert and Sullivan productions.  It was well after midnight before the party concluded and the children “sought rest in good American beds.”

Mrs. Field held a reception the next day from 4:00 to 8:00pm for the parents and other friends, all of the decorations remaining in place until that event had concluded.

TABLEAUX VIVANTS
On August 31, 1889, the Glessner children staged tableaux vivants at The Rocks.  (See blog article dated September 1, 2014 for a full account).  The continuing popularity of The Mikado is reinforced by the fact that one of the tableaux featured Fanny dressed as Yum-Yum, one of the “three little maids” from The Mikado.  Frances Glessner noted in her journal, “The first tableau was of Fanny as Yum-Yum – bound up in a window curtain and bed quilt.” 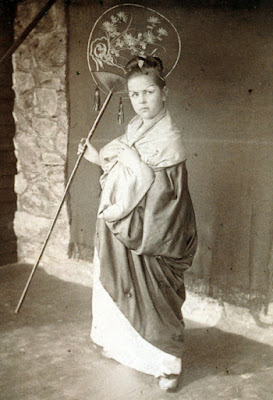 The Mikado is still frequently performed, and it remains the most popular of Gilbert and Sullivan’s fourteen operettas.