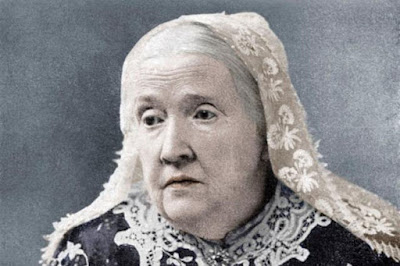 Exactly 125 years ago this week, Julia Ward Howe, best remembered today as the author of the “Battle Hymn of the Republic,” was a house guest of John and Frances Glessner.  In this article, we will look briefly at Julia Ward Howe’s life and then focus on her frequent interactions with the Glessners during a friendship that lasted over twenty years.

JULIA WARD HOWE
Julia Ward was born in New York City on May 27, 1819, the daughter of a successful banker and stock broker.  Well-educated and extremely intelligent, she began writing essays, plays, and dramas.  In 1841, she married Samuel Gridley Howe, a reformer and founder of the Perkins School for the Blind; he was 18 years her senior.  Her husband in general did not approve of her writing, especially since it often focused on the rights and roles of women in society.

In November 1861, the Howes were invited to meet President Abraham Lincoln at the White House.  During that trip she wrote new words to the popular song “John Brown’s Body” and the new version was published in the Atlantic Monthly in February 1862.  It became one of the most popular songs of the Union during the Civil War and remains so to this day. 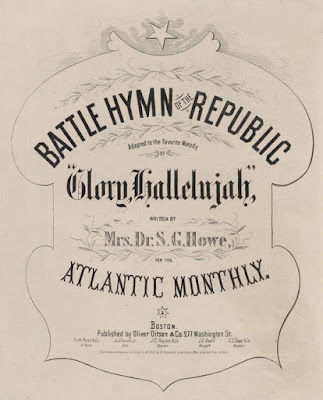 The popularity of the Battle Hymn raised her profile in the public eye, and she continued to write and publish extensively, on topics ranging from literature and her travels to pacifism and women’s suffrage.  In 1868, she was a co-founder of the New England Women’s Club, the first women’s club in the United States, and later served as its president.  She was also a founder and long-time president of the New England Woman Suffrage Association and later, the Association of American Women, and served in a leadership position in numerous other organizations advocating for suffrage and women’s rights.  In 1908, she became the first woman to be elected to the American Academy of Arts and Sciences.

THE GLESSNERS MEET JULIA WARD HOWE
The Glessners came to know Julia Ward Howe through her daughter, the author Maud Howe Elliott (see blog article November 16, 2015), whom they first met at a tea given by the English artist William Pretyman at his studio in April 1888.  (Four years later, the Glessners would commission Pretyman to design and execute the hand-painted burlap wallcovering in their parlor).

Just one year later, on April 16, 1889, Frances Glessner noted in her journal, “Had calls all the afternoon.  Mrs. Julia Ward Howe one of my callers.”  The following Monday she hosted a small luncheon in honor of Mrs. Howe to which twelve ladies were invited.  Following luncheon, Mrs. Howe and Mrs. Carpenter (one of the guests) sang, much to the delighted of the party.

Two days later, Frances Glessner attended another luncheon for Mrs. Howe, this time given by Mrs. Franklin MacVeagh (owner of the other H. H. Richardson designed house in Chicago).  She remained in the city for several more days, as indicated by the entry Frances Glessner made in her journal on May 3rd:

“Friday I went to the Fortnightly and heard Mrs. Julia Ward Howe read a paper on Dante and Beatrice, I also heard some wonderful eulogies pronounced upon her by Mrs. Dexter, Mrs. Donelson, and Dr. Stevenson – who left no words in the language unused to heap praise upon Mrs. Howe.”


A VISIT TO THE GLESSNER HOUSE IS PLANNED
During a trip to Boston in February 1891 to visit their son George, the Glessners paid a call on Julia Ward Howe at her home, 241 Beacon Street.  She returned the call the following week, and invited them to breakfast at her home the next morning.  Of the breakfast, Frances Glessner wrote:

“Thursday we went to Mrs. Howe’s to breakfast where we met Mrs. Laura E. Richards, Miss Amy Richards, General Walker, Mr. and Mrs. Jack Gardner – the much talked of.  It was very pleasant.”

During the breakfast there was apparently some discussion that Mrs. Howe would be visiting Chicago in early March.  Soon after, Frances Glessner wrote to her inviting her to stay with the Glessners during her time in Chicago.  On March 4th, Howe quickly penned a note to Frances Glessner:

“My dear Mrs. Glessner,
I am much concerned to have left your kind letter so long unanswered.  The rush and strain of ten days of almost constant sitting in Convention must be my excuse,  the fatigue of the meetings, pleasant as they were, incapacitating me from doing anything outside of them.  Without further preamble, let me say that I have arranged to leave this place tomorrow, Mar. 5th at 3.30 p.m. by what is called the Pennsylvania Route, reaching Chicago some time on Friday.  I am sorry to say that my stay with you can only be until Monday, as I have a lecture in Hinsdale on Monday evening, another in Rockford on Tuesday evening, and one in Dubuque on Thursday, 12th.  This, you see, will not allow me to attend the Fortnightly on the 13th.  I am so tired just now that the prospect of two quiet days with you is delightful, but I shall of course be glad to meet any friends whom you might wish to invite.  My dear Maud is intruding, I know, to profit by your very kind invitation to her.  Hoping to reach you safely on Friday, and not at some unearthly hour, believe me, dear Mrs. Glessner, cordially and gratefully
Mrs. Julia W. Howe.” 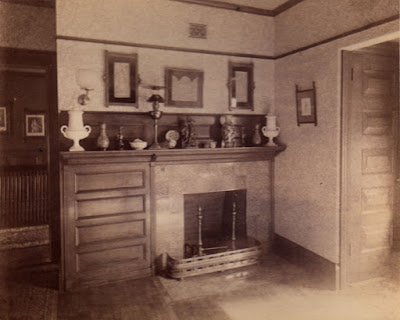 Mrs. Howe arrived at the Glessner home on Friday afternoon.  In the evening, the Glessners took her to Hooley’s Theatre to see The Silver Shield, starring Rosina Vokes and Courtenay Thorpe.  Frances Glessner noted in her journal that “Courtenay Thorpe recognized Mrs. Howe and looked hard at her.”  The next day, Frances Glessner, daughter Fanny, and her companion Violette Scharff accompanied Mrs. Howe to the Columbia Theatre to see the Lilliputians “a company of German dwarfs” that the party found clever and amusing. 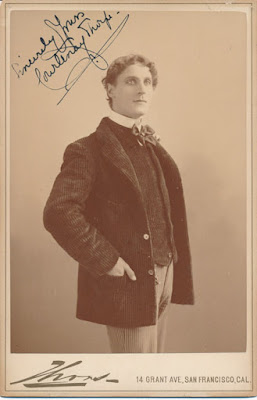 Mrs. Howe’s daughter Maud Howe Elliott and her husband, the English artist John Elliott, arrived from St. Paul on Sunday.  Frances Glessner noted that “Courtenay Thorpe called on Mrs. Howe and Mrs. Elliott in the afternoon – he was very pleasant.”

On Monday, Mrs. Howe travelled to Hinsdale to give a lecture.  The next day, she and her daughter left for Denver where she was to give additional lectures.  They returned at the end of the month, staying in the Glessner home for one additional night before returning to Boston.

THE FRIENDSHIP CONTINUES
In October 1891, Mrs. Howe was back in Chicago and Frances Glessner saw her at an informal tea given by Bertha Palmer.  In early December, the Glessners were back in Boston, and Mrs. Howe invited Frances Glessner to attend a meeting of the New England Women’s Club.  She sent over her personal card in a note which read:

“Dear Mrs. Glessner,
The enclosed card will admit you to the Club session this afternoon.  You should be a 5 Park St., up one flight, by 3:15 p.m.
Cordially and in great haste,
Julia W. Howe” 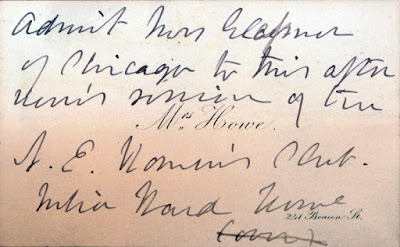 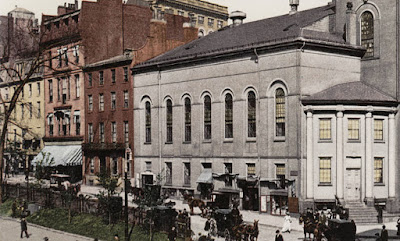 Park Street, Boston; the New England Women's Club
met in the building at the far left

The Glessners were invited to lunch at Mrs. Elliott’s home later that week, and Mrs. Howe was present.  Frances Glessner noted that:

“There we met Augustus St. Gaudens – who came in for a few minutes with Mr. Elliott.  After luncheon Mr. Elliott took us over to see the new public library.  We went all over the building.”

(Note:  In 1901, John Elliott painted a large two-panel mural entitled “Triumph of Time” on the ceiling of the library.)

Mrs. Howe paid yet another visit on the Glessners when she was back in Chicago in May 1892.  And the Glessners lunched with Mrs. Howe when they were in Boston the following March. 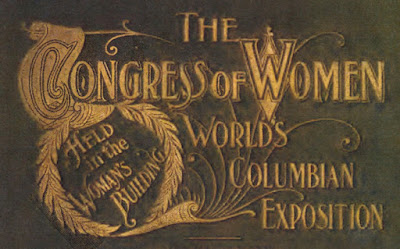 In May 1893, both Julia Ward Howe and her daughter Maud came to Chicago to participate in the Congress of Women at the World’s Columbian Exposition, staying at the Glessner home.  Frances Glessner noted in her journal that “Maud Howe Elliott has been here for two weeks.  Mrs. Julia Ward Howe has been here a week. . . Mrs. Howe and Mrs. Elliott have been going to the Women’s Congress this week.”

The Congress of Women, held in the Woman’s Building on the fairgrounds, consisted of a series of more than 80 meetings held over the course of a week.  Nearly 500 women from 27 countries spoke on a broad range of topics regarding women’s concerns, and it was estimated than more than 150,000 people listened to the speeches.  Julia Ward Howe spoke on the topic “Women in the Greek Drama.” The last recorded visit with Mrs. Howe took place in May 1909, when the Glessners were passing through Boston on the way to their summer estate, The Rocks.

JOHN GLESSNER REMEMBERS
In later years, John Glessner was persuaded by his children to write a manuscript entitled “Ghosts of Yesterday” where he discussed various prominent friends who visited the Glessner home on Prairie Avenue.  Of Julia Ward Howe, he wrote:

“Mrs. Julia Ward Howe and her daughter Maud Howe Elliott were with us many times, and Mrs. Howe delighted in her favorite stunt – reading her Battle Hymn and telling how she was inspired to write it.  She was really a great lady, with her excusable and generally admirable peculiarities – deeply interested in the Sanitary Commission during and after the Civil War.  And her daughter Maud’s filial love and admiration would inspire all observers.” 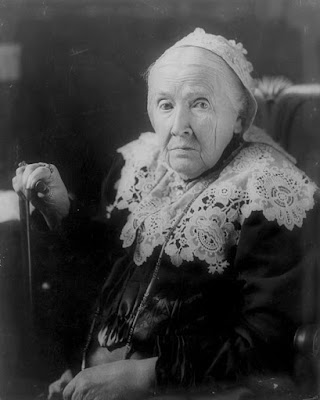 DEATH
Julia Ward Howe died on October 17, 1910 at her home in Portsmouth, Rhode Island at the age of 91.  She was interred at Mount Auburn Cemetery in Cambridge, Massachusetts.  At her memorial service, more than 4,000 people sang the “Battle Hymn of the Republic” as a sign of respect.
Posted by Glessner House Museum at 6:00 AM