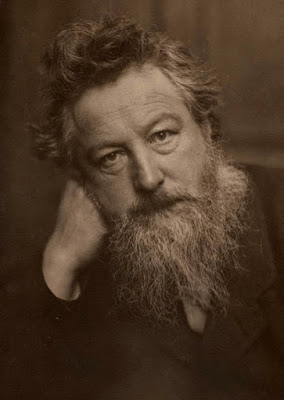 The extensive use of wallpapers, textiles, and rugs by Morris & Co. in the Glessner house is well documented, and in recent years, many of these items have been faithfully reproduced and reinstalled.  H. H. Richardson, as a major proponent of Morris & Co. in the United States, certainly influenced the Glessners’ decision to acquire these items for their home.  In this article, however, we will see that Frances Glessner became well-acquainted with William Morris more than two years before she ever met Richardson.

Introduction to William Morris
The earliest mention of Morris in Frances Glessner’s journal occurs on Tuesday March 6, 1883, “I went to the Decorative Art Society.  Wm. Morris and his designs was the subject – it was very interesting.”  Frances Glessner was an early member of the Chicago Society of Decorative Art, founded in 1877 “to help impoverished women master the skills of an honorable trade particularly by training women artists and artisans in the applied arts.”  (The organization survives today as The Antiquarian Society at the Art Institute of Chicago).  It would have been the logical place for her to learn about Morris and his emerging impact on the decorative arts.

As was often the case with Frances Glessner, when a topic piqued her interest, she actively pursued it.  Less than a week later, she noted in her journal, “I am reading Morris’ Hopes and Fears for Art.”  By the following week, she had finished the book. 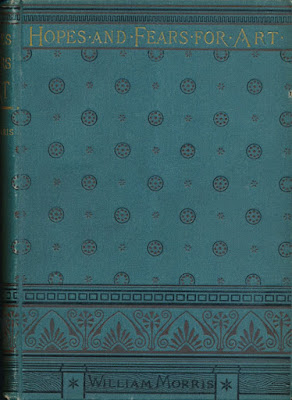 Hopes and Fears for Art
This volume, published in both the United Kingdom and the United States in 1882, was a collection of five lectures delivered by Morris in Birmingham, London, and Nottingham between 1878 and 1881, namely:
-The Lesser Arts
-The Art of the People
-The Beauty of Life
-Making the Best of it
-The Prospects of Architecture in Civilization 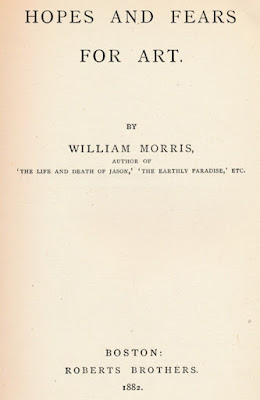 In the lectures, Morris states many of his widely known views, including the inherent value of handicraft, and the evils of industrialization.  The fifth chapter, for example, contains interesting views on architecture and how it relates to the other arts.  It also illuminates his thoughts on historic preservation, not surprising given that he was the founder of the Society for the Protection of Ancient Buildings in 1877.  (That organization led indirectly to the founding of the National Trust).  He opens his lecture on architecture as follows:

“The word Architecture has, I suppose, to most of you the meaning of the art of building nobly and ornamentally.  Now, I believe the practice of this art to be one of the most important things which man can turn his hand to, and the consideration of it to be worth the attention of serious people, not for an hour only, but for a good part of their lives, even though they may not have to do with it professionally.

“But, noble as that art is by itself, and though it is specially the art of civilization, it neither ever has existed nor ever can exist alive and progressive by itself, but must cherish and be cherished by all the crafts whereby men make the things which they intend shall be beautiful, and shall last somewhat beyond the passing day.

“It is this union of the arts, mutually helpful and harmoniously subordinated one to another, which I have learned to think of as Architecture.”

John J. McGrath
Before the month of March 1883 had drawn to a close, Frances Glessner considered the purchase of Morris products for her summer home at The Rocks, then under construction.  On Friday March 23, she noted, “I took Mrs. Avery down to McGrath’s to see Wm. Morris designs in materials for furnishing.  We had a delightful morning.  I selected a lovely combination for The Rocks, but it is too expensive.” 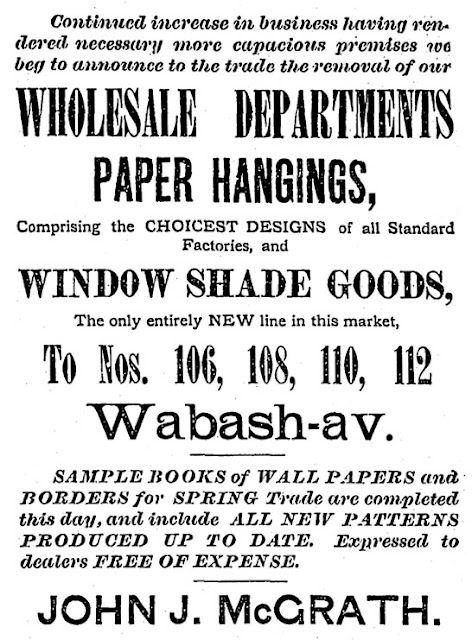 McGrath’s was a reference to the wholesale and retail establishments of John J. McGrath.  An article in the Chicago Tribune on January 1, 1883, noted that his firm sold more paper-hangings than any other firm on the continent.  In addition, a number of European manufacturers, “recognizing the advantages of Chicago as a distributing point,” made McGrath’s their exclusive agent in the United States, thus requiring Eastern buyers to purchase from him.

Although Frances Glessner did not purchase the Morris & Co. items she admired, she had been a customer of McGrath’s for several years, purchasing numerous wallpapers there for her home on West Washington Street.

Later History
Frances Glessner makes no further mentions of Morris in her journal until February 1887 when she began actively purchasing rugs, textiles and wallpapers for her new home being built on Prairie Avenue.  Many of these items, including a Hammersmith rug for the main hall, were purchased through Marshall Field & Co., which by that time, was offering a line of goods from the English firm.