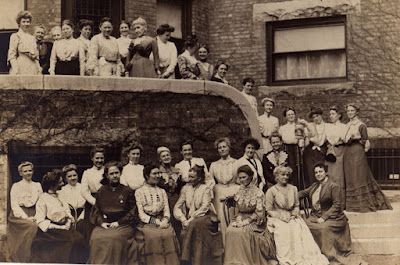 I began my summer project on Frances Glessner’s Monday Morning Reading Class with little idea of what I would uncover. As I looked more and more into the class, I was struck by the similarities between this group of women and my college sorority. As a sorority girl who loves everything about sorority life from the sisterhood to rituals to formals, I think of the organization that brought me and my sisters together quite often. As such, while reading about the Monday Morning Reading Class through my collections project, I was struck by the similarities between this class and my sorority.

Mrs. Glessner had the first meeting of her Monday Morning Reading Classes in November of 1894 with the goal of gathering young married women from the South Side of Chicago together, including the wives of the professors of the newly opened University of Chicago. Mrs. Glessner hosted a meeting every week while she was in town, typically November through May. The class ran for two hours and involved a reading from a book (provided by a paid professional reader) or a lecture, followed by a performance from a visiting musician and lunch the first Monday of each month. It was a popular social event that was by invitation only; Mrs. Glessner created a roster of members every season that included around 90 names. The Monday Morning Reading Classes continued until Mrs. Glessner’s declining health required that the class be disbanded 1930. 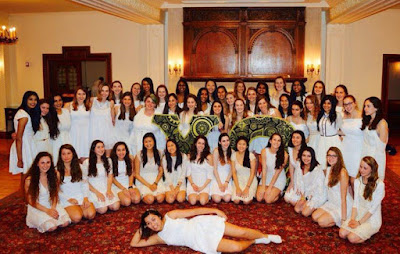 It’s plain to see the similarities between the class and my sorority at first. Sororities are women-only groups, just like the Reading Class. There’s a special sacredness to women-only spaces where we don’t have to worry about the impression we make and can form bonds with those around us. Women who wouldn’t otherwise meet become close friends. It’s also a relief to have a gathering where men may be invited but are not allowed to invite themselves. In a sorority, a male visitor is permitted to speak and must leave directly afterwards. In the Reading Class, a male visitor was held strictly to their role as lecturer or musician, leaving swiftly after completing his task.

There are other small details of the Monday Morning Reading Class that match closely to sorority life. The members paid dues and went to weekly meetings, at which attendees were expected to dress a certain way, much like a sorority chapter. The class operated during the Glessners’ yearly stay, November through May, and sororities operate throughout the school year, from September to April with a break for the winter holidays. There were select people in charge of the class: the hostess, Mrs. Glessner; the reader, Miss Trimingham and later Mrs. Kennedy; and the treasurer, Mrs. Philo Otis. Similarly, sororities have their own set of directors.

The roster of Monday Morning Reading Class members changes slightly from season to season, as some members leave and others are selected. While there isn’t any record of how Mrs. Glessner selected the new members, one can assume that the names were given to her by members and friends of the class, just like sorority recommendations for recruitment. Although in this aspect, I must say that the class seems to be more exclusive than my sorority was during our recruitment process.

The small details that I found to be the most intriguing were descriptions of rituals. The Reading Class went out with a bang at the end of every season. Much like a sorority ends with a formal, the class concluded with a luncheon for all members complete with gifts and more flowers than Mrs. Glessner could handle. However, there were several journal entries by Mrs. Glessner describing elaborate rituals.

On , Mrs. Glessner described a peculiar scene from the Reading Class in her journal:
I gave some tapers to some of the ladies who lighted them at the library fire—they were passed from one to the other until every one had touched them. Then they were carried out in procession to the dining room where the new lamp was lighted. The lamp stood in the centre of the dining table with a wreath of green ferns and red carnations around it. We all applauded the lighting. 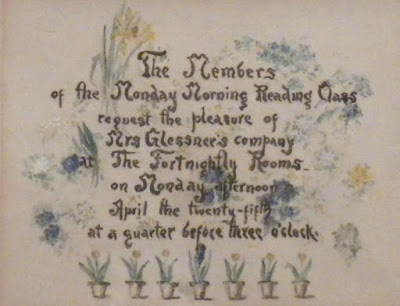 There were also extra parties that hinted at some ritual aspects, such as the one described in Mrs. Glessner’s journal, held on April 25, 1904:
The day was rainy but there were sixty of the ladies at the party. Mrs. Stein stood in the hall watching for us and as soon as we stepped out of the elevator disappeared telling the ladies we had arrived. We left our cloaks in the dressing room and went in to the Fortnightly assembly room where the ladies stood in a circle at the door, Mrs. Kennedy and Miss Trimingham being without hats. The rooms were most beautifully decorated with flowers which had been sent by the ladies. The mantel was trimmed with pink snapdragons. The rest of the room seemed done with yellow and white flowers and green palms. Two large baskets of daisies, violets, hydrangeas and white lilacs stood on the rostrum and came from the University ladies. A large box of yellow jonquils came from the Hibbard sisters. The dining room had tulips all around the wainscoting and the table decoration was made in a pyramid of all sorts of spring flowers and was very beautiful. After the greetings were over twelve members of the orchestra came and played a beautiful program. Mrs. Thomas read her paper on the musician’s life and temperament. Then Kramer played, the musicians played again and after that a very pleasant tea was served. It was all most beautiful, the spirit of affection and whole tone was especially charming. I came home quite tired and headachy but never enjoyed a more beautiful afternoon in my life.

On , Mrs. Glessner described a memorial service at the class for one member who committed suicide: “Monday we had a good sized meeting of the Reading Class and had a little memorial to Mrs. Donaldson, a written word to the class from me and a very pretty tribute from Miss Trimingham.” Descriptions became briefer after that; Mrs. Glessner described a couple more parties given for the Reading Class in 1907 and a memorial service for Miss Trimingham and Mrs. Smith on .

Rooms were decorated in an elaborate and specific way; the description of greetings was vague and may be more ceremonial than a casual hello. This is all conjecture of course, but the combination of several parties with specific details about actions and decorations leads me to believe that these were more like ceremonies. The repeated ceremonies, such as the memorial services and the end-of-year celebrations, could be considered rituals.

Given its many sorority-like characteristics, Mrs. Glessner’s Monday Morning Reading Class was a proto-sorority. If the Glessners had not purposefully disbanded the group due to Mrs. Glessner’s illness, I believe that the class would have gone on for much longer. Maybe they would have eventually picked out a couple of Greek letters in order to abbreviate such a long title.

Our guest author is Genevieve Leach, an Art History and Archaeology major at in . During her summer internship at , she organized the collection of documents related to Mrs. Glessner’s Monday Morning Reading Class.
Posted by Glessner House Museum at 1:51 PM