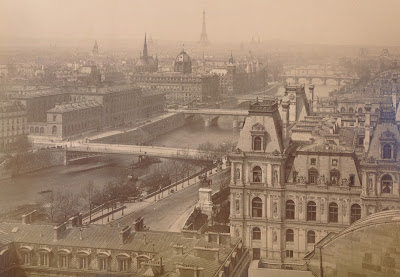 Panorama of the seven bridges

As this article is being written, the iconic Cathedral of Notre Dame in Paris, continues to burn, the images of the building devastation heartbreaking for Parisians, Christians, and all those who love and appreciate historic architecture.  As stewards of a Chicago landmark (designed by H. H. Richardson, who received his architectural training at L’Ecole des Beaux Arts in Paris), we sympathize with all those who are impacted by the irreplaceable loss of this internationally significant architectural treasure.

John and Frances Glessner and their daughter Fanny (accompanied by her paid companion Miss Scharff) had the opportunity to visit Notre Dame during a trip to Europe in the early part of 1890.  Below are selected excerpts from the Glessner journal (written by John Glessner) detailing their time in Paris.  (All images, other than that of Notre Dame Cathedral, taken from an album of photographs assembled by the Glessners during their trip). 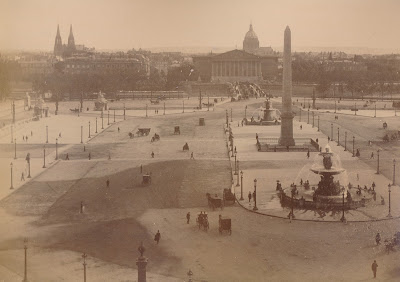 Monday February 24, 1890 (in Havre):
“At 7:30am left by train for Paris . . .Had telegraphed Hotel Baida to send man to meet us at RR station in Paris and soon after arrival were comfortably placed in our hotel with two good sunny communicating rooms, fire lighted etc. . . We went for a long drive through Paris. . . We drove for four hours through places of great interest – only stopping once or twice.  We were most impressed by the Madeleine, Notre Dame, Arc de Triomphe.  We drove on the Champs Elysses to the Bois de Boulogne to Café Cascade where we got out and had a cup of delicious hot chocolate.

“Tuesday Feby. 25 was spent – morning at the Louvre with antique statuary and some old paintings.  The enormous galleries are full of wonderful and beautiful historical works.  Were most impressed by the Venus de Milo and Melpomene.  The Venus is larger than we had expected, and most beautiful from every view.  The coloring of Van Dyck and Titian and Tintoretto and the great works of Rubens impressed us . . . Murillo’s Immaculate Conception kept our attention for as long as we could spare. . . Dined table d’hote at the Continental and from there to Port St. Martin Theatre to see Sarah Bernhardt in Joan of Arc.  Small theatre, so that everybody was close to stage.  Four balconies or galleries and the 1st floor gave seat space.  The play was fine and well given. 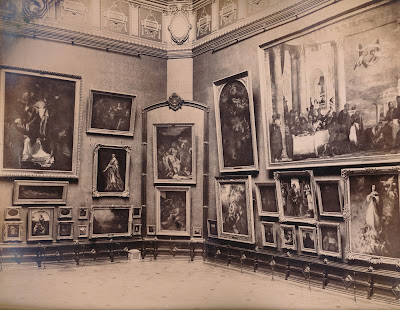 A gallery at the Louvre

Wednesday February 26:
“The ladies, Fanny included, started out shopping immediately after breakfast and I wandered about until 11, when I went to meet Fanny and relieve her from further shopping, but they had been delayed so we all lunched together at Café Voisin.  From there drove to Notre Dame Cathedral and went through that beautiful building and saw the wonderful
treasures it contains.  After that all four took top of street car and rode across Paris.

Thursday February 27:
“After breakfast went to Ste. Chapelle, the oldest church in Paris.  Then to the Cluny Museum where we were more than delighted with the collections of furniture, embroideries, laces, porcelain, etc.  Then to the Pantheon and walked hastily through looking at the frescoes but did not go down to the underground tombs nor up to the tower. 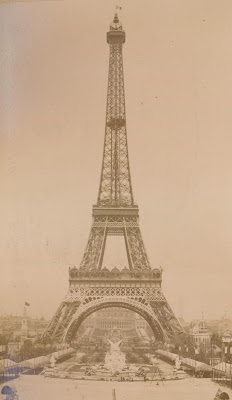 Friday February 28:
“Went to the Luxembourg at once after breakfast.  Saw the large bronze St. John by Paul Dubois and some fine pictures.  Liked best Jules Dupre’s Eleaner, Rosa Bonheur’s Cattle Plowing, Bonnet’s portrait of Lion Cogniet, and Bastien-Lepage’s Haymaking.  Saw also the Oyster Gatherers by Feyen-Perrin of which we once had an etching.  From there the ladies went to Au Bon Marche after walking through the gardens, and I to the bankers for letters.  Lunched at the Binda, left Fanny here and we went shopping and to call on (Mihaly) Munkacsy at his studio.  The reception room was furnished with screens and sofas and hangings, had a bright fire burning and was filled with French callers. . . He took us into his studio, through a door draped with three or four thicknesses of hangings, and we sat there on a corner sofa a while talking with him through Miss Scharff. . . The studio had a stuffed horse in it and some stuffs and was very light.  Visited many old shops and Theodore Deck’s place, but found nothing to buy.  Bought at Barbedienne’s a bronze Sitting Mercury.  We are getting quite in conceit with our own bric-a-brac, as it compares well with what we see, or is reproduction of what we see.

Saturday March 1:
“Went to Louvre after breakfast to have another look at the art treasures. . . After that to a private exhibition of paintings at The Cercle de L’Union Artistique 5 Rue Boissay D’Anglas. . . Neglected to say above that we went Friday night to the Grand Opera, L’Africaine and found the performance magnificent.  Had never seen such stage setting.  Over 100 players in orchestra and at one time at least 175 people on the stage, perhaps more.  A Chicago audience on a similar occasion will compare favorably with this one, though perhaps not so many jewels worn by the ladies.  Generally the dresses here were not so low at the neck as at home, but a few were lower.  The men wore hats between the acts. 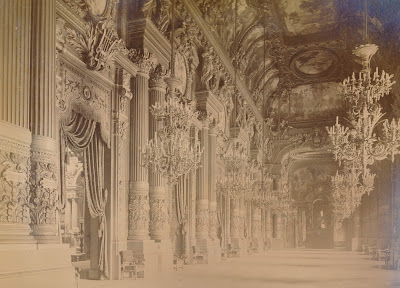 Foyer of the Grand Opera House

“Sunday morning went to the Greek church and staid through the service.  The church is in shape of Greek cross about 35 feet square and contained many paintings some at least of which were very good and perhaps more, for we couldn’t see them very well.”

(On Monday March 3, the Glessners traveled to Cannes and then to Italy, returning to Paris on April 2, during Holy Week, spending ten days there before boarding their ship at Havre for the passage home).

Friday April 4:
“Good Friday.  We all four went shopping together this morning.  Bought a bureau and writing table for bedroom at home. . . 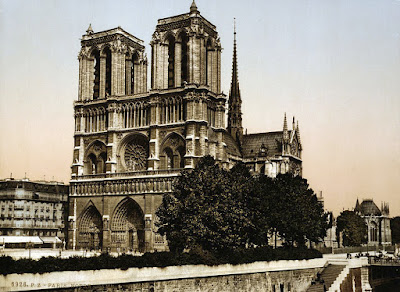 Notre Dame Cathedral in the 1890s

Sunday April 6:
“On Sunday morning – Easter Sunday – Frances and Miss Scharff went to service at Notre Dame, which they found interesting. . . Fanny and I staid at home and wrote letters.  After luncheon we drove to St. Cloud and on the Bois de Boulogne until dinner time.  Fanny wore her Bersagliero hat and cloak, supposing that anything might be worn here without remark, but found it unpleasant because of the attention it seemed to attract.”

“On Wednesday morning April 9th, I visited Central Halles the great market, the Tower of St. Jacques, Sainte Chappelle, and Notre Dame while the two ladies and Fanny went to dressmakers, bought embroideries, etc.  After luncheon, Miss Scharff and Fanny drove to the Jardin d’Acclimatation to see the animals and birds. . . At 7 we took carriages four ourselves and our guests the Hutchinsons and went to our dinner.  When we came home Miss Scharff and I from our cab saw the blaze from a large fire, so got Mr. H. to join us and drove to it.  Some large sheds of second hand building material were burning, with great heat and blaze, and quite a crowd had gathered.  A number of men and boys had climbed into the trees for a better sight.”

Newspaper clipping:
“Big Blaze in the Rue Daru”
“Last evening, between nine and ten o’clock, by the lurid appearance of the sky in the direction of the Arc de Triomphe, it was plain that a large fire was raging somewhere in that part of the city, and excited crowds hastened along the boulevards to the scene of disaster.
“On the rue Daru, near the Russian church, stood a row of sheds and ware-houses used by a firm of dealers in second-hand building materials.  These were found to be in flames, and owing to the inflammable nature of the contents, straw, piles of boards, etc., the fire blazed fiercely, lighting up the whole neighborhood.
“The flames threw out such volumes of heat that it was almost impossible for the firemen to hold their ground.  For an hour or so water and fire fought for the mastery, while thousands watched the struggle with admiration.  Finally the water won, streaming down in a deluge from many lines of hose.  The light died away, the heat diminished, the multitude dispersed, and the fire was out.”

NOTE:  A large engraving, depicting Notre Dame Cathedral, always hung over the bed in George Glessner's bedroom, as seen in this historic image below. 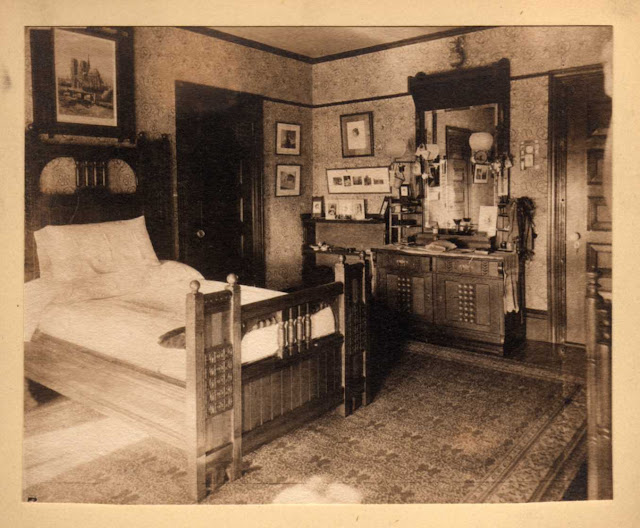