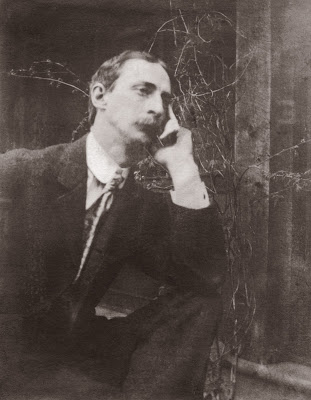 May 7, 2019 marks the 150th anniversary of the birth of architect Howard Van Doren Shaw.  One of the best-known architects in his day, Shaw’s distinctive blending of traditional elements with his own personal style, led to his reputation in the architectural community as the most radical of the conservatives, and the most conservative of the radicals.

Glessner House, in partnership with Friends of Historic Second Church, will honor Shaw by hosting a half-day symposium on May 11, 2019, with five scholars exploring various aspects of Shaw’s career.  The symposium will take place in the sanctuary of Second Presbyterian Church, Shaw’s masterpiece of the Arts and Crafts movement, and the only one of his designs to be designated a National Historic Landmark.  For more information on the symposium, or to purchase tickets, click here.  In this article, we look back at Shaw’s life and several commissions he received in the South Loop which exhibit the breadth of his abilities.

Howard Van Doren Shaw was born on May 7, 1869 to Theodore and Sarah (Van Doren) Shaw.  Theodore was a successful dry goods merchant and a descendant of an early Quaker settler who came to America with William Penn.  Sarah was a talented painter and a descendant of a prominent Dutch family that included the first mayor of Brooklyn, New York.  Shortly after Shaw’s death, fellow architect Alfred Granger noted that Shaw had inherited his father’s “strength of character and quiet firmness” while receiving “his artistic taste, his love for color and fantasy” from his mother.

Shaw’s parents married in 1865 and established their home at 66 Calumet Avenue (later 2124 S. Calumet).  By the time Howard was a young boy, the house sat in the midst of the most exclusive residential district in the city.  He received a privileged upbringing, attended the exclusive Harvard School for Boys at 2101 S. Indiana Ave., and became a member of Second Presbyterian Church, which his parents had attended since the time of their marriage.  Shaw earned a Bachelor of Arts degree from Yale in 1890 and that fall, entered the Massachusetts Institute of Technology, where he completed the rigorous two-year architecture program in just one year.

He returned to Chicago in 1891 and quickly obtained an apprenticeship in the prominent firm of Jenney & Mundie, an outstanding training ground that had produced architects including Daniel Burnham and Louis Sullivan.  The office was located in the Home Insurance Building, Jenney’s most prominent building, widely regarded as the first true skyscraper.  In the summer of 1892, Shaw headed off to Europe for an extended journey studying and sketching architecture.  While in Spain, he met and traveled with James Renwick Jr., the architect of St. Patrick’s Cathedral in New York, and Second Presbyterian Church in Chicago. 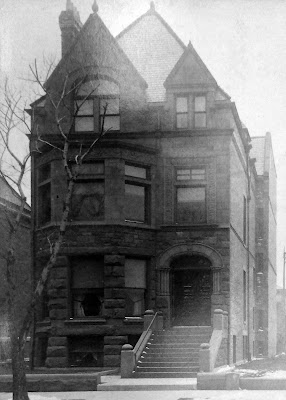 Returning to Chicago in early 1893, he rejoined the firm of Jenney & Mundie, and in April, married Frances Wells, the daughter of a pioneer Chicago boot merchant.  By early 1894, Shaw established his own practice, setting up his office on the top floor of his family home on Calumet Avenue.  He hired a draftsman, Robert G. Work, and quickly established a reputation for designing distinctive residences in a variety of architectural styles. 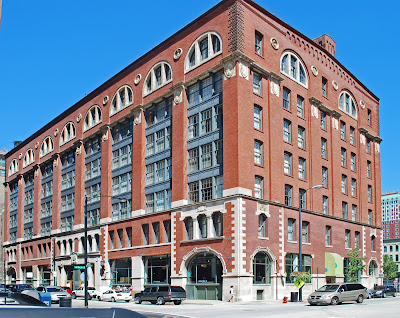 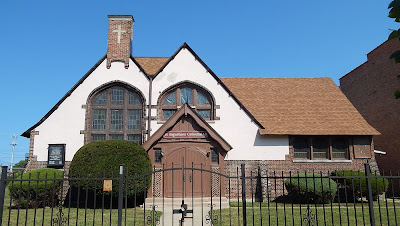 That same year, he received his first commission from Second Presbyterian Church, to design the Crerar Sunday School Chapel at 5831 S. Indiana Ave.  The building, designed and built at the same time as Shaw’s summer house, Ragdale, in Lake Forest, features a similar façade with twin gables sheathed in a smooth stucco finish.  The Chapel and Ragdale both exhibit Shaw’s early mastery of interpreting the English Arts & Crafts style. 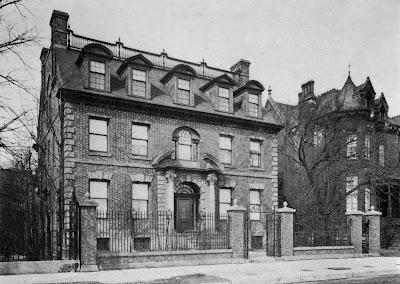 The first of three houses Shaw designed in the neighborhood stood at 1900 S. Calumet Ave. and was commissioned by Charles Starkweather in 1899.  Although based on classic Georgian design, interesting features such as the Palladian window cut into the pediment over the main entrance show Shaw’s interest in, and mastery of, introducing his personal touch into each commission he received. 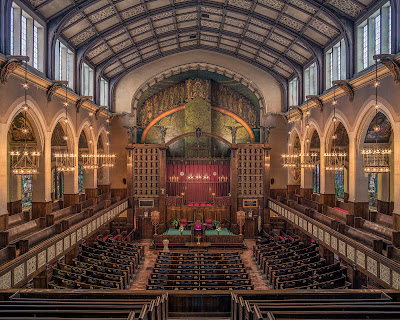 In March 1900, Second Presbyterian Church suffered a devastating fire which destroyed the sanctuary but left the outer walls intact.  Shaw was commissioned to rebuild the sanctuary, the design of which was inspired by his love of the English Arts & Crafts.  He and his wife traveled to England that summer for inspiration, and the completed designs were presented to, and approved by, the church board of Trustees that fall.  He engaged several talented Chicago craftsmen, including muralist Frederic Clay Bartlett, lighting designer Willy H. Lau, and the leaded glass firm of Giannini & Hilgart, to execute his vision for the space.  Shaw carefully incorporated several motifs including grapevines, pomegranates, and angels to create a unified appearance throughout the sanctuary, from the lighting fixtures and windows, to the carved wood ornament and cast plaster panels.  The result, completed in late 1901, is a gesamtkunstwerk, or total work of art, that was an essential tenet of the Arts & Crafts movement. 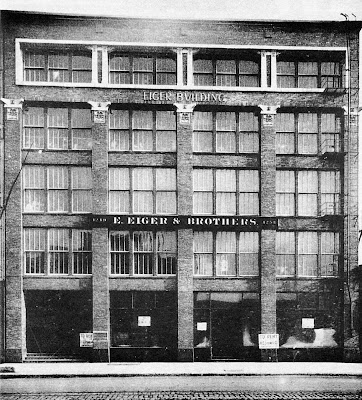 As work on the church was nearing completion, Shaw received a commission from his father-in-law, Moses D. Wells, for a commercial office and warehouse building at 1249 S. Wabash Avenue, known as the Eiger Building.  The façade of the five-story structure was almost entirely glass, with huge groupings of windows set back between thin vertical brick piers that clearly express the structural frame of the building.  The windows on the top floor, smaller in scale, are set within a long horizontal frame, giving the façade a carefully balanced composition which, combined with the simple but distinctive ornament, made the building stand apart from similar nearby structures. 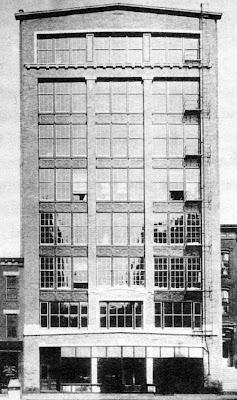 In 1902, he designed the Henneberry Press building one block to the north at 1139-1143 S. Wabash Avenue for a printing company.  The eight-story structure, again exhibiting huge amounts of glass on the façade, displays a clearly articulated base, middle, and top.  Shallow pediments at the base and cornice give a sense of verticality and lightness to the composition. 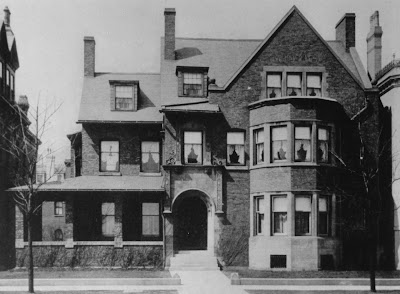 Shaw designed two additional houses in 1903.  The first was built for John B. Drake, Jr. and stood at 2106 S. Calumet Ave., just a couple of doors north of his family home.  For the Drake house, Shaw turned to the Tudor style creating a pleasing asymmetrical brick façade, anchored by a central recessed entryway and wrap-around porch.

The second house designed that year was more controversial.  Built for his Yale classmate Ralph Martin Shaw (no relation) at 2632 S. Prairie Ave., the narrow brick rowhouse was stylistically different from its neighbors, but more importantly, addressed the need for housing an automobile.  The ground floor was centered by the entrance to the “motor room” or garage that featured a large turntable set into the floor so that the auto could be turned around when it was time to exit.  The ground level was visually cut off from the rest of the house by a projecting limestone lintel above which was set a large grouping of three windows, denoting the main living spaces on the second level.  Although praised by architects, Shaw’s handwritten note next to a photo of the house in his scrapbook read “very avant-garde and criticized.” 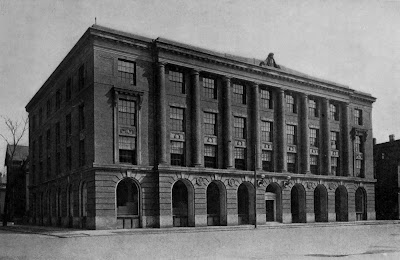 Shaw’s later commissions in the neighborhood reflect its rapid transformation from residential to commercial in the first decades of the 20th century.  In 1907, he designed a printing plant for the publishers, Ginn & Co., on the 2300 block of South Prairie Avenue.  Built of reinforced concrete in the Classical Revival style, the most notable feature was a series of three-story brick columns which lent a grand effect to the façade.  The building was the center of two preservation battles at the turn of the 21st century; the reconstructed façade survives at 2203 S. Martin Luther King Dr.

In 1911, Shaw received another commission from the Donnelley company, which had outgrown its Lakeside Press building on Plymouth Court.  That year, the company acquired all of the lots on the east side of the 2100 block of Calumet Ave., directly across the street from the house in which Shaw’s widowed mother was still living.  Considered one of the finest examples of “Industrial Gothic,” the building’s design reflects Shaw’s directive to design the structure “so that it will not be beautiful only today, but one hundred years from now.  We want to build it so people will say that it is art, intelligence and beauty rather than a flashy display of money.” 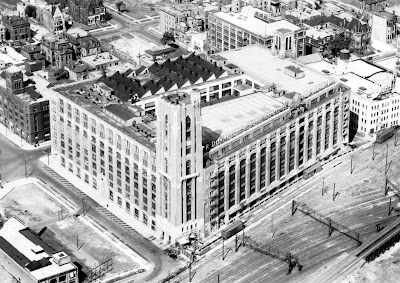 Brick and limestone piers are clearly articulated as buttresses with recessed spandrels and large expanses of glass in between.  Ornament includes rich stone carving and terra cotta plaques depicting historic printers’ marks.  It was built in four phases, the last completed after Shaw’s death, but true to his original design. 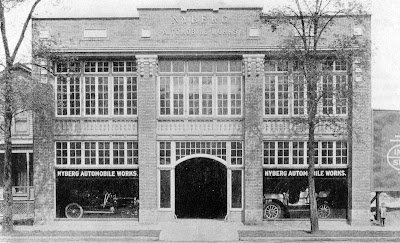 Shaw’s final commission in the neighborhood was for the Nyberg Automobile Works at 2435-37 S. Michigan Avenue, reflecting the growth of “Motor Row” along that street.  Completed in 1912, the building featured huge plate glass windows at ground level to showcase the automobiles, with a variety of Shaw ornament enlivening the façade above.

Although Shaw never designed another building in the neighborhood, he remained active throughout the Chicago area and beyond, designing everything from houses to industrial buildings, and from the planned company town of Marktown in East Chicago, Indiana to the first modern shopping mall, Market Square, in Lake Forest.  Shaw died on May 6, 1926, one day before his 57th birthday while being treated for pernicious anemia in Baltimore.  He was awarded the prestigious gold medal from the American Institute of Architects the day before his death.  Shaw was only the fifth American to receive the medal, which is awarded by the national AIA Board of Directors “in recognition of a significant body of work of lasting influence on the theory and practice of architecture.” 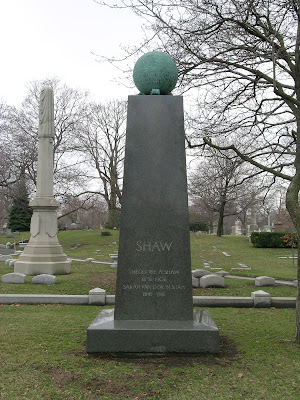 His wife later wrote, “It was said about William Morris, ‘You can not lose a man like that by his own death, only by your own.’  I know his family feels this to be true of Howard Shaw.”  The architectural community felt the same – he was highly regarded by his peers for his distinctive style and was still actively engaged in his architectural practice at the time of his final illness.  He was buried at Graceland Cemetery, the family plot centered by a marker of his own design, surmounted by a copper orb displaying the words of the 23rd Psalm.

Posted by Glessner House Museum at 8:26 AM