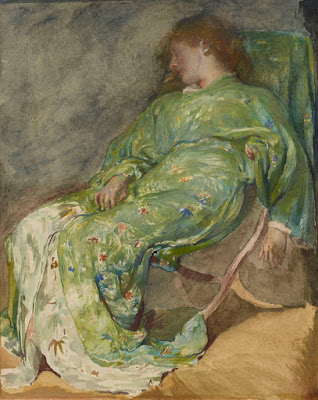 The Glessners were avid collectors of steel engravings but did acquire a small number of paintings and drawings to decorate their home.  John Glessner, in his The Story of a House written in 1923, noted that they possessed a painting by John La Farge, but little was known about it, as it is not currently in the Glessner House collection.

John La Farge (1835-1910) was an American painter and stained-glass designer who enjoyed a considerable reputation throughout the last decades of the 19th century.  Although largely remembered for his stained-glass work and rivalry with Louis Comfort Tiffany, he produced a significant number of easel paintings and murals during his career.  His extensive decoration of Trinity Church in Boston, designed by H. H. Richardson, gave him a national reputation, and the Glessners saw his murals and stained-glass windows while visiting the church with Richardson in 1885.  La Farge was also among the first American artists to be directly influenced by Japanese prints.  The Glessners had two books by La Farge in their library, Considerations on Painting: Lectures Given in the Year 1893 at the Metropolitan Museum of Art (1896), and An Artist’s Letters from Japan (1897).

Frances Glessner provided clues about the painting and its acquisition in her journal.  On June 26, 1887, she noted:
“Today we have enjoyed looking at twelve of La Farge’s water colors sent to us by Wunderlich.”
H. Wunderlich & Co. was a New York gallery founded by Hermann Wunderlich in 1874.  It dealt mostly in prints as well as the works of selected contemporary artists including James McNeil Whistler.  Frances Glessner first noted visiting Wunderlich in October 1883 when she went to see a collection of fifty etchings by Whistler.  In March 1885, Wunderlich sent several engravings to the Glessners for review.  They purchased three, including two “Dutch Admirals” they had been anxious to acquire for quite some time.  During a trip to New York in February 1886, they visited the gallery again, so clearly had developed a relationship with the owner.

The most significant clue to the identity of the painting is revealed in a journal entry from May 4, 1892, which recounts a visit by John La Farge to the Glessner home:
“Mr. Norman Williams brought the great John La Farge to call on me and see the house.  He was much astonished to find his painting of the sleeping woman here – he didn’t know it was even in Chicago.  He was delightful and I greatly enjoyed the call.  Mr. Williams told me in confidence that Mr. La Farge is to make a stained-glass window to the memory of John Crerar to put in the Second (Presbyterian) Church.”  (The large rose window was installed in 1893 but was lost in a March 1900 fire that destroyed the sanctuary). 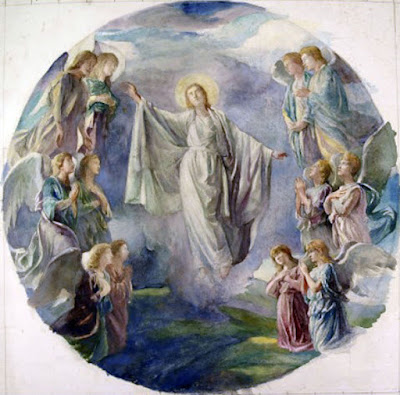 Taking Frances Glessner’s description of the work as depicting a sleeping woman, an internet search uncovered a La Farge painting entitled Sleep, now in the collection of the Colby College Museum of Art.  With an image in hand, it was possible to locate the historic location of the painting in the house.  It was revealed that the painting hung over the south music cabinet in the parlor, and appears in the earliest photos taken in 1888, and later photos taken in 1923 for The Story of a House. 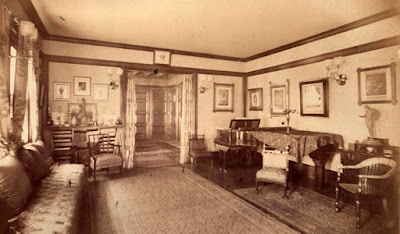 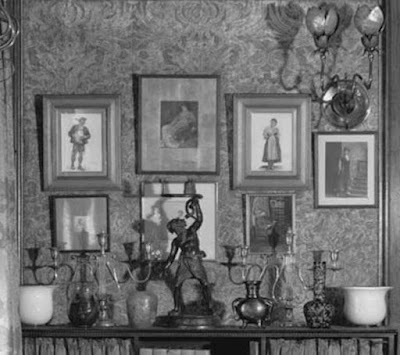 Another photo provided a valuable clue.  A descendant of the Glessners’ son George donated a photograph of George and Alice Glessner’s home, The Ledge, at The Rocks in Bethlehem, New Hampshire.  Taken about 1940, by which time Alice was a widow, the La Farge painting can clearly be seen on the wall behind her over a table lamp, confirming that the painting went to her when the Prairie Avenue house was broken up following John Glessner’s death in January 1936. 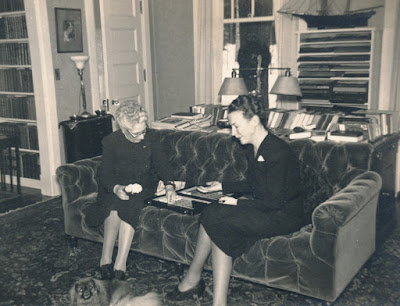 The Ledge, home of George and Alice Glessner, The Rocks, Bethlehem, New Hampshire
Sleep shown at left above table lamp

In March 2011, the painting was placed for auction with Christie’s in New York.  It was acquired by collectors Peter and Paula Crane Lunder, who gifted it to Colby College, along with seven other La Farge watercolors and two oils, part of a huge donation of more than 500 works of art given to the Art Museum.  In July 2019, the Museum graciously provided Glessner House with a high-resolution scan of the artwork, so that it could be framed and hung in the same location in the parlor where the original hung for nearly fifty years.

The watercolor on paper, executed in 1884 or 1885, measures just 6.5” x 8” and is based on an oil painting (now destroyed) John La Farge completed in 1869 depicting his wife.  Exhibition records indicate the watercolor was exhibited at least three times in 1886 and 1887, prior to the Glessners’ acquisition of the piece.  As noted on the Colby College Museum of Art website:
“Intimate in scale and private in mood, the watercolor Sleep combines realistic representation with decorative arrangement.  The artist’s wife, Margaret Mason Perry, is shown reclining in a shallow, interior space, her limp arms and gracefully turned head suggesting complete repose.  Repeated patterns and soft washes of color connect the figure with the surrounding space.” 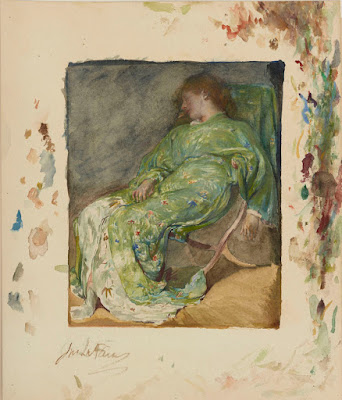 
We are delighted to have Sleep return to the Glessner House parlor, so that visitors can enjoy La Farge’s work of art, just as guests of the Glessners did for half a century.  Special thanks to the staff at the Colby College Museum of Art for their assistance in making this project possible. 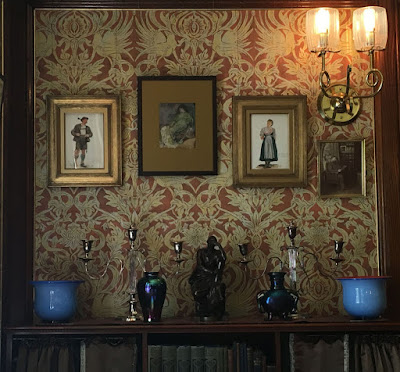 The reproduction of John LaFarge's Sleep as reinstalled in the
Glessner House parlor on August 2, 2019.