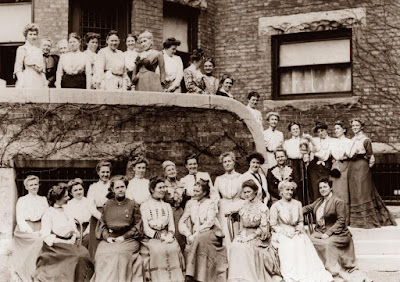 The Monday Morning Reading Class, May 5, 1902
(Photo by George Glessner)

In our previous article, we looked at the formation of the Monday Morning Reading Class in November 1894, how it operated, and its activities during its first season.  In this second article, we will explore the class over its next several years, showing how its activities also sometimes extended beyond the basic structure of reading.

The second season of the class commenced on November 4, 1895.  Thirty-seven ladies gathered and commenced to read Renaissance in Italy, a seven-volume history written by John Addington Symonds between 1875 and 1886.  Portions of the extensive history were read throughout the season, with Michelangelo being a focus by February.  Other works read that season included a lecture by the artist John LaFarge, an appropriate topic given that Frances Glessner owned an original LaFarge watercolor, which she displayed in her parlor.

The Glessners’ daughter Fanny was invited to join the class in season three, having turned eighteen earlier that year.  Although she was one of the very few single ladies ever invited to join the class, she missed the entire season as she was on her Grand Tour of Europe, accompanied by her aunt, Helen Macbeth.  The invitation sent to her provides information on the focus that year – a series of essays on art by Van Dyck, Moore, Brownell, and others occupied the first hour.  For the second hour of “lighter reading,” the class continued its study of Fyffe’s Modern Europe, followed by the three volume American Commonwealth by James Bryce, 1st Viscount Bryce. 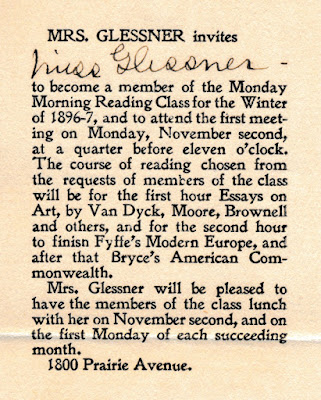 On December 14, 1896, a new occasional feature was introduced to the class, namely having an author come and read from their own work.  The Glessners were long-time friends of F. Hopkinson Smith, a well-known author and artist.  He frequently sketched in the White Mountains of New Hampshire, that is possibly where they were introduced.  He was also an engineer of note and designed the foundation for the Statue of Liberty.  Smith would always spend time with the Glessners while visiting Chicago on his never-ending circuits of readings across the U.S.  Frances Glessner noted in her journal:

“Monday Mr. Smith came into the reading class and read more than an hour to the ladies.  He read some stories that have not been published in book form.  The ladies were perfectly delighted.  He made them laugh and cry both.  He read until the carriage came to take him to the station.  There was quite a full meeting.  I introduced him while he stood outside the door.”

As the third season grew to a close, the Glessners headed off to their summer estate, The Rocks, and soon after a Friday Night Reading Class was started for the farm workers and their family members.

With the Monday Morning Reading Class well established, John Glessner and the husbands of several of the class members came up with the idea of hosting a tea for the ladies to show their support for the undertaking.  Frances Glessner recalled the event on Wednesday November 10, 1897 in her journal:

“Wednesday afternoon John had his tea given to the reading class ladies and their husbands.  Dr. Hyde, Prof. Judson and Mr. Hutchinson presided at the tea table.  Mr. Herrick, Mr. Moore, Mr. Ryerson and Chauncey Blair assisted – coming ‘without their hats.’  The ladies all sent John boutonnieres.  One of my chrysanthemums was sent to him.”

(Note:  A new variety of chrysanthemum had recently been developed and named the “Mrs. J. J. Glessner” in her honor.)

John Glessner conveyed his thanks to the ladies to be read at the class the following Monday, which read, in part:

“Only that hard taskmaster, business, prevents me from being with you this morning, by your leave or without it, to tell you how my doubts about the existence of the Class have all been dissipated, how much I enjoyed meeting you last Wednesday, and how greatly I appreciated your flowers and the sentiments they conveyed. . . And so, though in body 500 miles away, I speak to you through the telephone of my wife’s lips to give you greeting and thanks.  Words are but empty thanks anyhow.  Inadequate as they are, they are the only vehicle I have.  May your numbers never grow less, and your charms ever increase.”

Selected excerpts from Frances Glessner’s journal provide additional insight to the happenings of the class.

December 4, 1899:
“Monday, we had a large meeting of the reading class.  After an hours reading of the book on Russia, Mrs. Winterbotham read us her Fortnightly paper on ‘Character through Effort.’  Then Miss Ensinger, a very talented young violinist, played a half hour.  She is a young German girl of eighteen years, a pupil of Mr. Lewis.  She plays remarkably well.”

November 19, 1900:
“We had the usual pleasant Monday reading class.  Miss Trimingham read Emerson’s Essay on Behavior.  It was very fine, and showed that he had set a new standard to which many of us have been trying to live up to.”

December 3, 1900:
“(Today) was our reading class luncheon day.  At the request of the class I gave an explanation of the bees.  I had a complete hive sent up from New York to show – and had the observatory hive placed in the middle of the library table.  This was surrounded by old brocade and embroidery and plants and flowers.  The ladies were most enthusiastic over the talk.  There were forty-eight ladies here.”

December 26, 1900:
“Mrs. Frank Johnson gave her gift party to the reading class.  Each member sent a gift with a rhyme to some other member designated by Mrs. Johnson.  Miss Trimingham read them all and passed the gifts out.  The gifts were hung on the tree.  The tree was lighted by little electric lights.  After the presents were distributed, Miss T. came up to me and presented me from the class a lovely lamp – a Grueby vase with a Tiffany shade.  I had to respond and was scared into insensibility.”  (The Grueby Faience Company, founded in 1894, was a ceramics company that produced distinctive and important vases and tiles throughout during the American Arts & Crafts Movement.)

The eighth season of the class ended on May 5, 1902.  It was an important meeting of the class for two reasons, as noted in the journal:

“Monday was the last meeting of the Reading Class.  I had engaged Dr. Slonaker of the University to come and give a lecture on birds and their nests.  He came bringing a stereopticon and Dr. Week of the Field Museum who operated the lantern.  The lecture was most delightful.  The pictures were nearly all from life and had been colored by Mrs. Slonaker.  The ladies sent and brought great quantities of beautiful flowers.  I had two men come from Samuelson’s to help arrange them.  We had the sideboard massed with them, all the windows filled and a great mass on the table.  The rest were in the parlor . . . Mrs. Goldsmith read a little history of the class.  Miss Trimingham says she will not be able to read to us anymore.  After luncheon, George came up and took our photographs in a group in the yard.”

The iconic photo of the Class assembled on the curved porch in the courtyard (shown at the top of the article) was taken that day, to commemorate the final class at which Miss Ann Trimingham would serve as reader.  It is the only time the class was photographed in its 36-year history. 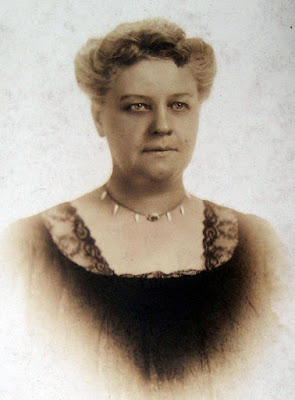 When the class resumed that fall, the new reader was Mrs. Nathalie Kennedy, who would continue in that role until the class disbanded in 1930, and came with excellent credentials.  Mrs. Kennedy was the daughter of Joseph Sieboth, who had been a pupil of Felix Mendelssohn.  She was also the niece of Frederick William Gookin, a good friend of the Glessners and the long-time curator of Japanese prints at the Art Institute of Chicago.  Mrs. Kennedy would later serve as president of The Fortnightly from 1910 to 1912.  Her first reading went well as noted in the journal:

“Monday morning, we had the first meeting of the year of the Reading Class with Mrs. Kennedy as reader.  There were fifty-four ladies here – four of them were guests.  The ladies lunched with me.  I asked Mrs. Kennedy to stand by the fireplace facing the audience.  She read an essay on the Victorian novelists by Paul, and a short story.  The reading was most delightful, and everyone seemed more than pleased.”

There was always a close connection between the Reading Class and The Fortnightly, as there were quite a few women who were members of both.  When the class decided to honor Frances Glessner with a special reception, the rooms of The Fortnightly in the Fine Arts Building were the obvious choice.  Frances Glessner recorded the event, held on April 25, 1904:

“Monday, April 25th was a red-letter day for me.  The Reading Class gave me a most beautiful reception in The Fortnightly rooms at quarter of three in the afternoon.  The invitation was very beautiful and I have had it framed. . . There were sixty ladies at the party.  Mrs. Stein stood in the hall watching for us and as soon as we stepped out of the elevator, disappeared telling the ladies we had arrived. . . The rooms were most beautifully decorated with flowers which had been sent by the ladies.  The mantel was trimmed with pink snapdragons.  The rest of the room seemed done with yellow and white flowers and green palms.  Two large baskets of daisies, violets, hydrangeas and white lilacs stood on the rostrum and came from the University ladies.  A large box of yellow jonquils came from the Hibbard sisters.  The dining room had tulips all around the wainscoting and the table decoration was made in a pyramid of all sorts of spring flowers and was very beautiful.

“After the greetings were over, twelve members of the orchestra came and played a beautiful program.  Mrs. Thomas read her paper on the musician’s life and temperament.  Then Kramer played, the musicians played again and after that a very pleasant tea was served.  It was all most beautiful, the spirit of affection and whole tone was especially charming.  I came home quite tired but never enjoyed a more beautiful afternoon in my life.  The flowers were all sent here to me.  I sent part of them to Alice and part to Frances.

“I felt that I must make some little remembrance to the musicians who were asked to play professionally but said no they were only too glad to play for Mrs. Glessner and came in that spirit for the afternoon.  I had made for them each a scarf pin – a good Baroque pearl mounted on a gold stick at Spauldings, and got a silver key ring for McNichol and sent them all in on Friday afternoon before the concert with a note.” 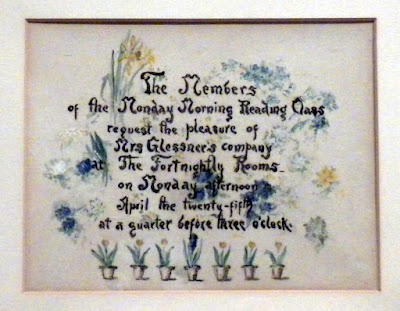 In the next article, we will examine an even more extraordinary expression of affection given to Frances Glessner by the Reading Class – her 1906 calendar.