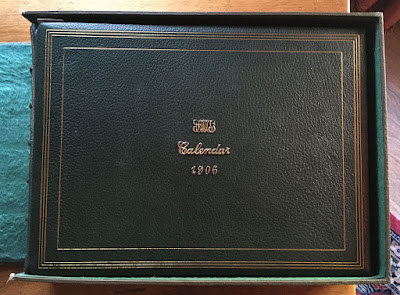 During the year 1905, the Monday Morning Reading Class, which had been meeting for more than a decade, planned a very special gift to be presented to Frances Glessner on her 58th birthday, January 1, 1906.  A large leather-bound calendar, contained pages prepared by class members, friends, and family members, to be read daily throughout the year.  The book itself measured 12-1/2” x 17” and was four inches thick.  With its case, it was designed to fit exactly, when opened, on the library table in the second-floor hall.  The individual pages, one for each day of the year, were mounted two to a page, and measured 5” by 8”.  The calendar remains one of the most extraordinary items in the house collection. 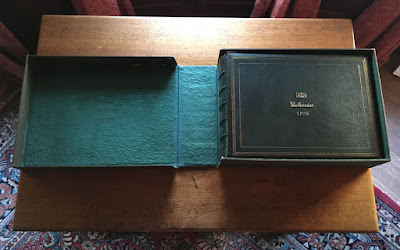 Frances Glessner recalled the receipt of the calendar in her journal:

“January 1st I had several pretty gifts from embers of the family, flowers from friends, when a box came in beautifully done up, everything in the choicest and most attractive manner – box of green leather with gold letters monogram etc. a standard of the same, in all a very remarkable calendar prepared for me by members of the Reading class.  It is in four sections – each one has an original title page, one done by Mr. Gookin, one by Fred Bartlett, one by Herman von Holst, one by Mr. Scott – all exceedingly beautiful.” 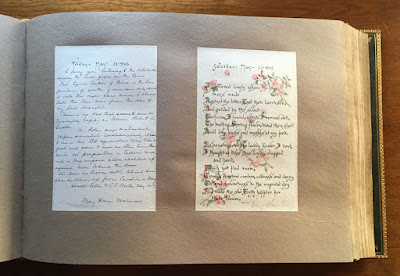 Frances Glessner was deeply involved in the civic and social life of the city, so it is not surprising that many of the pages were contributed by names still recognized today – Daniel Burnham, Hermann V. von Holst, Frederic Clay Bartlett, Frederick Stock, Charles Hutchinson, Bryan and Helen Lathrop, Harold and Edith McCormick, Frank Lowden, and William Rainey Harper.  Friends from outside Chicago contributed as well, including Frederick Law Olmsted Jr., Isabella Stewart Gardner, and Julia Shepley (the daughter of H. H. Richardson).  The result is an assemblage of beautifully designed and executed pages that convey the profound respect in which Frances Glessner was held by all who knew her. 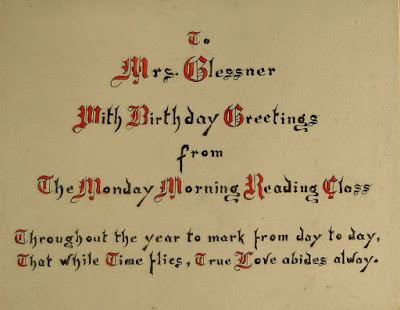 When the Reading Class met the following week, Frances Glessner asked her daughter-in-law, Alice, to read a thank you letter to the class which read in part:

“How could you think of it?  How could you accomplish it?  How did you know there were so many choice people in the world with big hearts, willing wits and loving thoughts?  How could anything so exquisite in every detail, so perfect in workmanship, so dainty so refined be put together?

“Fairies and elves could conceive nothing which would give me greater pleasure, more lasting delight than that tribute of your affection . . . The first thought each morning is what does the calendar bring today?  What old friend speaks, what dear face looks out, what poem, what song, what picture, what sacred association?

“Not all of the lovely women in the world are in this class, but there is not one here who is not lovely . . . my heart swells with pride to see a splendid room filled with charming matrons in becoming garb, no introductions needed, all friends, all clever, all intellectual, with high ideals.  This circle is something to be proud of, and I am proud of it and of every individual in it.

“I have one small confession to make.  I have peeped ahead a little in the calendar – only a little – members of my family interfered in the most officious manner and told me I was dishonorable.  Now I have come to a conclusion of my own.  What if I should die before I see it all?  So after today I fling honor to the breeze and establish a code of my own, I am going to peep.”

Reproductions of 104 pages were put on exhibit at Glessner House in early 2007.  Rick Kogan featured the calendar in an article entitled “Ghostly Writers: City Giants of Long Ago Send Messages Through Time at Glessner House” in his weekly Sidewalks column in the Chicago Tribune Magazine on February 18, 2007.  Below we present a few select pages from the calendar, it was most hard to choose, indeed!

January 12, 1906: William Rainey Harper
The first president of the University of Chicago, whose suggestion led to the formation of the Reading Class in 1894, was fluent in several ancient languages, and wrote his message in both English and cuneiform. 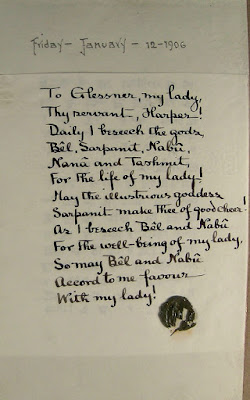 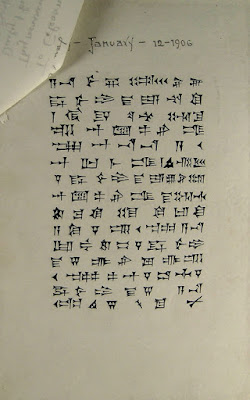 January 18: Helen Macbeth
The sister of Frances Glessner, Helen was a talented painter and created an artwork showing the Macbeth family home in Springfield, Ohio, where John and Frances Glessner were married on December 7, 1870. 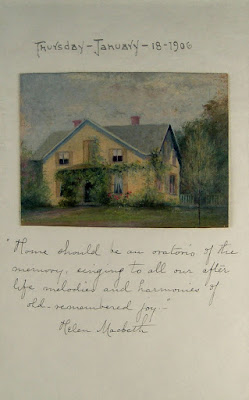 February 23: Frederick Stock
Second conductor of the Chicago Symphony Orchestra.  Among the Glessners closest friends, a few years later he would dedicate his first symphony to them, much of it having been composed at their New Hampshire summer estate, The Rocks. 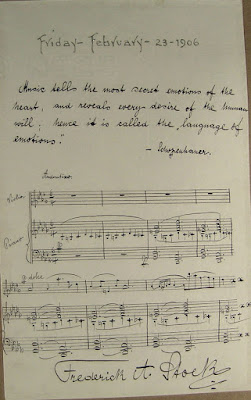 March 7: Charles L. Hutchinson
Hutchinson was the long-time president of the Art Institute of Chicago, and he and his wife Frances were frequent guests to the Glessner House.  For his page, he selected a print by the well-known English etcher and printmaker, Sir Francis Seymour Haden. 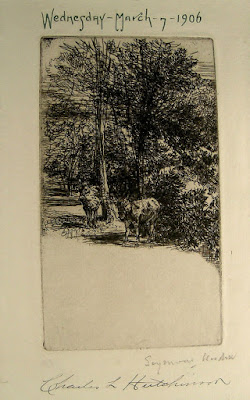 March 31: William G. Hibbard
Part of the large Hibbard clan which occupied several house on Prairie and Calumet Avenues, he provided a detailed landscape plan for his summer home in Winnetka, then under development. 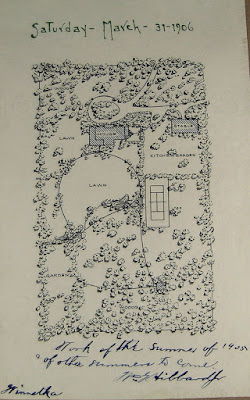 April 25: Susan Follansbee Hibbard
Hibbard’s wife, a member of the Reading Class, had the architect of their summer home, A. Lincoln Fechheimer, based in Cincinnati, draw out the floor plan for Frances Glessner to study and enjoy. 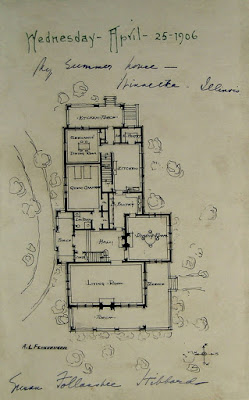 July-September title page: Frederic Clay Bartlett
Bartlett designed the title page for the third section of the calendar.  Using his typical pre-Raphaelite style at the time, he depicted the Reading Class, its monthly lunches, and Frances Glessner’s interest in music and beekeeping. 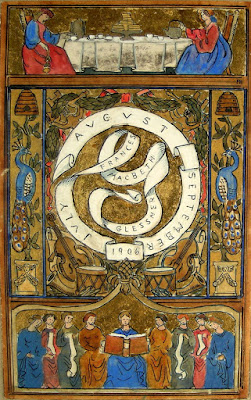 October 11: Theodore Thomas memorial
The first conductor of the Chicago Symphony was among the Glessners closest friends and had died in January 1905.  The beautifully illustrated page was one of two commissioned by the orchestra for inclusion in the calendar. 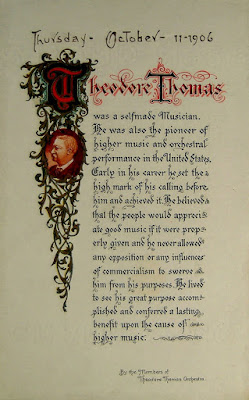 November 4: Daniel H. Burnham
Architect Daniel Burnham and his wife Margaret both contributed pages.  Daniel Burnham’s page features a quote about the satisfaction of doing good work, a reflection of his interest in the Swedenborgian faith. 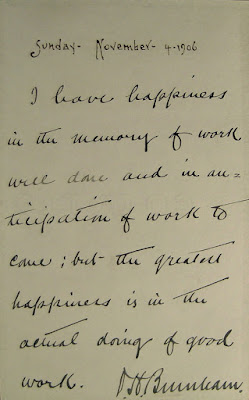 December 14: Inauguration of Orchestra Hall
The second of two pages contributed by the orchestra, this page commemorated the second anniversary of the opening of Orchestra Hall in December 1904.  The Glessners personally raised much of the funding to construct the hall. 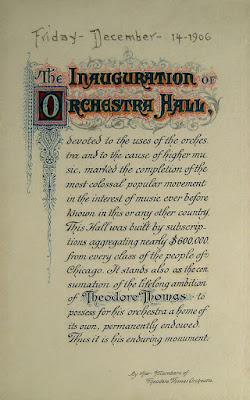 Posted by Glessner House Museum at 11:45 AM