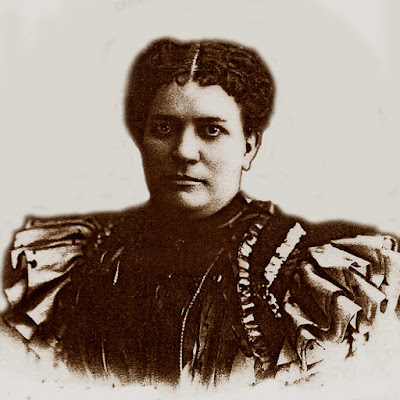 Mattie Williamson in the 1890s

During the second week of March, just before our world changed and Glessner House found itself closing for an extended period, we had the opportunity to celebrate Women’s History Month with a focus on the Glessners’ much-beloved cook, Mattie Williamson. We are fortunate to have rich archival resources about the live-in staff at Glessner House, allowing for an authentic and detailed interpretation of the real Mattie, her years in service, and exactly what it was like to be a cook in a large Chicago household during the Gilded Age.  In this first of two articles about Mattie, we will look at her life and service with the Glessners. In next week’s article, we’ll recap the events that took place during her “return” in March 2020.

Sarah L. Williamson, known as Mattie throughout her life, was born on May 18, 1862 in Inverness, a municipality in the Centre-du-Quebec region of the province of Quebec, Canada.  Her parents, John and Mary (Duff) Williamson had both emigrated from Ireland to Canada prior to their marriage in 1842 and chose this area of Quebec where many other English, Irish, and Scots were settling. Mattie was the ninth child in the family; she was baptized in the Anglican church at Maple Grove on July 20, 1862. 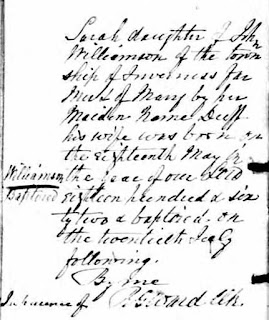 Just three years later, her mother died in childbirth and was interred at the Christ Church Cemetery in Saint-Jean-de-Brebeuf, a town originally named Lower Ireland (Maple Grove having been known as Upper Ireland). Soon after, her father married Julia Ansly, 27 years his junior, and together they had four children, whom Mattie helped her stepmother to raise. 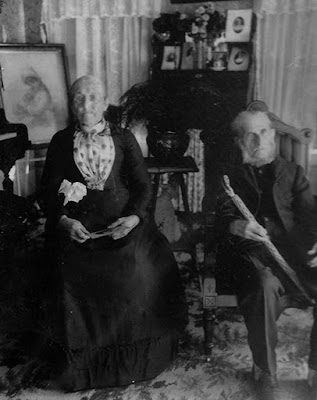 Julia and John Williamson in the 1880s

By the time Mattie was a young woman, her parents and siblings had relocated south into the United States, settling in the northern portion of Vermont and New Hampshire. Her brother Alex had settled in Littleton, New Hampshire, and in 1883 was hired, along with his wife Sarah, to manage the farm operations of the Glessners’ new summer estate, known as The Rocks. It was in this way that Mattie became acquainted with the Glessners, as she often stayed with her brother, and during the summer would sometimes help with tasks at The Rocks. 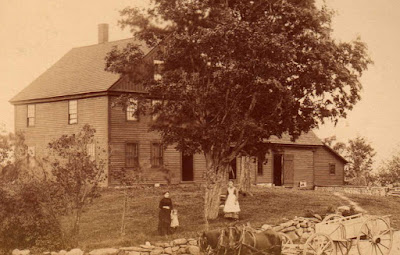 The Williamson's home at The Rocks;
Mattie is probably the young woman to the right of the tree

In August of 1891, the entire house staff of five abruptly quit after dinner. Frances Glessner noted in her journal:
“After dinner Fredrick appeared with a document signed by all five saying they would all leave as soon as they could be paid. John made out their accounts - the two men, Frederick and James, walked to town, bought out a dump cart and old white horse - they took their trunks and all five left the house at six o’clock - they got no travelling expenses - only their wages. We sent down for Mattie Williamson who came up to help us put of our trouble - bringing her little brother with her. We all helped get supper and wash the dishes. This morning we made beds, helped with the breakfast, dinner etc.”
The next month, Mattie visited her parents in Vermont for a week, after which time she returned to The Rocks to accompany the Glessners back to Chicago. 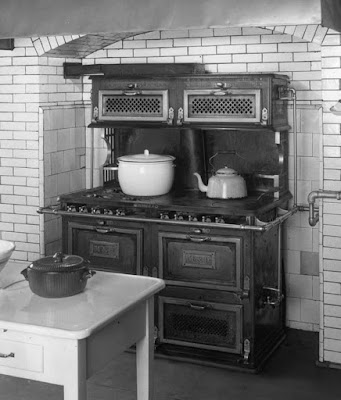 Originally hired as a maid, her opportunity to become cook came in early February 1892, after Frances Glessner was forced to dismiss her seventh cook in as many weeks, due to their inability to work with the new gas stove she had had installed:
“I dismissed my seventh cook last week . . . Mattie Williamson is going to try my cooking. I shall have her taught.” 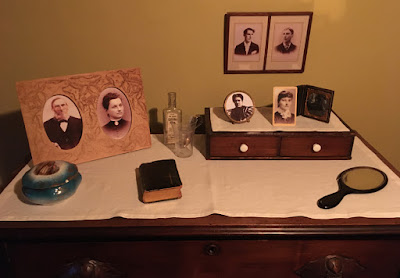 Mattie was given the room farthest to the east in the female servants’ wing. That room, restored in early 2009, was recently updated to incorporate several Williamson family photos and a photo of Mattie with the house servants, taken by George Glessner. 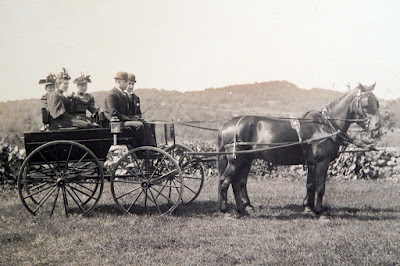 Mattie is seated at far left in this photo of the servants heading out for their annual picnic to the Flume, located near The Rocks, probably 1893

The Glessners developed a warm relationship with the entire family, and over the years, no less than eight Williamson family members worked for them, including three of Mattie’s siblings, her sister-in-law, a niece, and two nephews. In October 1893, the Glessners invited Alex and Sarah Williamson to visit Chicago for a week to see the World’s Columbian Exposition. They stayed in the corner guest room and were sent to the Auditorium to see a performance, and even visited John Glessner in his office. Mattie left service for a year starting in May 1897, although she appears to have stayed in Chicago as she helped out with a special dinner dance the Glessners hosted just before Christmas 1897, and also baked the wedding cake for Frances and Blewett Lee when they were married at the house on February 9, 1898. By May 1898 she had returned and accompanied the family up to The Rocks.

Frances Glessners’ menu books demonstrate what a highly skilled cook Mattie became. Elaborate eight-course dinners were common, requiring not only skills in cooking, but in time management as well, especially considering she was cooking and feeding the live-in staff of eight simultaneously.  She became well-known for her bread and rolls, winning awards at a competition held by the Women’s Club in 1900. The large collection of cookbooks in the Glessner library contains volumes with handwritten recipes in Mattie’s handwriting tucked inside, and Frances Glessner’s manuscript cookbook lists several recipes attributed to Mattie, including one for pastry. 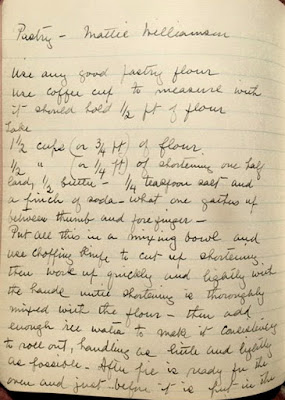 Mattie's recipe for pastry, written out by Frances Glessner

In May 1909, Mattie, assisted by Fanny Tynan (who was employed by the Glessners on and off for over 20 years in various capacities), prepared a huge dinner:
“In the evening John gave a dinner to the Commercial Club here at our house. I have been arranging for this for weeks. We had sixty-three gentlemen here. We received them in the upstairs hall. When they came down to dinner I staid up . . . We had a fine dinner every bit of which was prepared in the house and cooked by Mattie and Fanny.”
(Mattie cooked an equally large meal when the Commercial Club visited The Rocks).

Mattie was a highly trusted servant, being sent to The Rocks each year about a week in advance of the Glessners, to help get the house ready and stocked, so that all was in order when they arrived. This journal entry from May 1903 is typical:
“Mattie had a nice supper for us. Mattie had been here a week and had everything pretty well in order for us.” 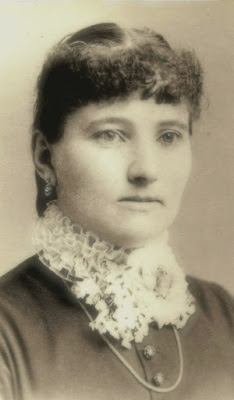 After getting the Glessners settled at The Rocks in May 1912, Mattie took off the summer to visit her sister, Rachel Cole, in Los Angeles. While there, she met a widower named William S. Prescott. When she returned to The Rocks in early August, she announced her intention to be married.  The Glessners gave her a gift of $250.00 (nearly $7,000 in today’s dollars) and The Rocks staff gave Mattie a great send-off:
“That evening the people on the place gave a great party for Mattie Williamson, our excellent & reliable cook for the last 20 years, who is soon to be married & go to California to live. They made up a purse of $44 & bought her a rocking chair, silver tea set, a tablecloth & dozen napkins. The party was held in the Electric Light Plant room; there were 57 grown persons & 2 children, & it was in every way successful & everybody was happy.”

Mattie Williamson and William Prescott were married in Los Angeles on December 26, 1912 and they moved into his bungalow at 417 W. Ortega Street in Santa Barbara. It does not appear the marriage was a happy one. In April 1913, Frances Glessner Lee was in California and wrote to her mother:
“I have an appointment with Mattie for tomorrow morning and will not leave her house until I have a full understanding of her affairs.” 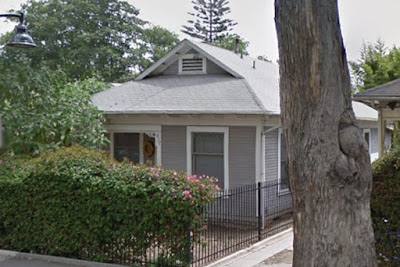 In June of 1913, Mattie wrote to Frances Glessner from her sister’s home in Los Angeles, the letter opening as follows:
“Your nice letter received some time ago and was more than pleased to hear from you. Should have answered before but was undecided in my plans. You asked me to be open and tell you all, and I am going to do as you ask.”

She then goes on to note that she is not “contented” in Santa Barbara and would prefer to live near her sister in Los Angeles. Having found a nice lot in South Hollywood, her husband agreed to build a house, if Mattie would buy the lot:
“My money is all in Stocks and Bonds, the three bonds that Mr. George (Glessner) got for me some few years ago and the Stocks that Mr. Glessner got me last Spring. I could use the Bonds but would rather not .  .  . Now I should consider it a great favor if I could hire one-thousand dollars, of you and Mr. Glessner and if you wish, I could give you the Bonds as security until I could pay back the money.”
It is most interesting to note that both John and George Glessner helped Mattie invest her money, George in bonds, and John Glessner by purchasing $1,600 in Public Service stock the previous year.

She closed the letter noting:
“Have often thought of the beautiful place at The Rocks and the many pleasant times I have had. Would have been pleased to go back and work for you many years longer, but on account of my age, thought it would not be advisable to work over the hot stove.”
(Mattie was 50 at the time of her marriage.) 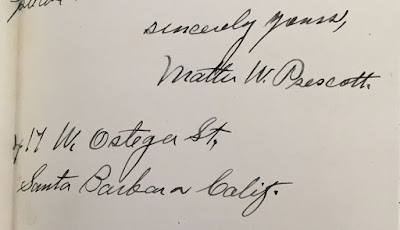 Mattie's signature on the letter sent to Frances Glessner

The house in South Hollywood was never built, possibly due to Mattie’s declining health. In February 1917, George B. Glessner and Jessie Chandler, two of John Glessner’s siblings, visited Mattie while driving through Santa Barbara:
“George and Jessie write from Santa Barbara that Mattie Williamson Prescott is threatened with serious heart disease and fears she may have to give up their housekeeping.” 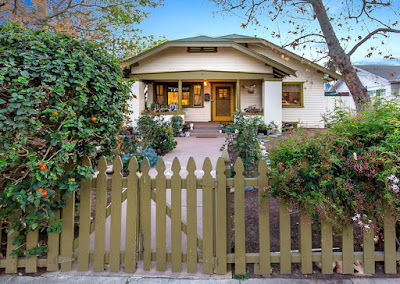 Mattie died on March 27, 1919 at the home of her sister Rachel Cole, located at 5802 Lexington Avenue in Los Angeles. She was buried in the Hollywood Forever Cemetery and was later joined in the same plot by her sister and niece.

Mattie’s will, filed just five weeks before her death, made the following provisions for her husband and sister:
“Third. My said husband, William S. Prescott being adequately supplied with money and property in his own right, to keep him in comfort during the balance of his life, should he outlive me, I make only a nominal provision of the sum of Five Dollars, to be paid him out of my estate.
“Fourth. To my sister, Mrs. Rachel W. Cole, who has cared for and assisted me in every manner possible, ministered to my wants during my present illness, I give and bequeath all of my silverware, one leather covered rocking chair, two fern dishes, two large vases, four pieces of Haviland china, three quilts, six sheets and six pillow cases and towels, pieces of embroidery, one chafing dish, one black leather grip and the ivory set that goes with it, two hand paintings and all my family pictures and all my clothing and personal belongings not otherwise disposed of, also I give to my said sister the sum of $1,000.00 or the equivalent thereto in property of my estate.”
She also left $1,000 each to her sister’s three children including her twin sons, Raymond and Reynold, who were appointed executors of the estate. 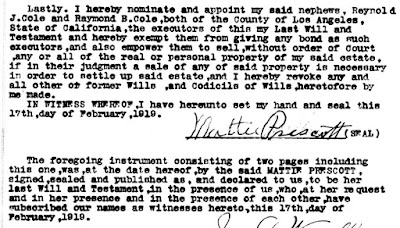 Many years later, Frances Glessner Lee, in writing to her son, noted that Mattie had been a real part of the family and was “one of the finest people that ever lived.”