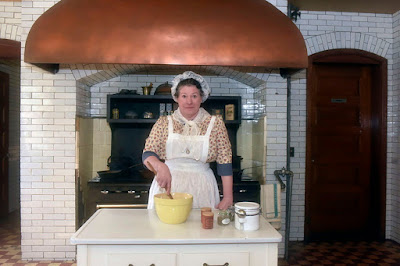 Last week, we took a close look at the life of Mattie Williamson, the Glessners’ beloved cook, who served the family from 1892 until her retirement in 1912. In this article, we will look at the events celebrating her “return” to Glessner House in early March. The recreation of Mattie was the result of intensive research into her life here at the house, including an examination of over 100 cookbooks and Frances Glessner’s menu books, combined with detailed knowledge of historic cooking methods at the turn of the 20th century. Our deepest thanks to Ellie of ElliePresents, for her dedication in bringing the character of Mattie to life for all those who had an opportunity to participate in our special events on March 8th and 12th. 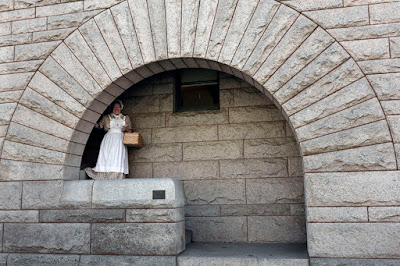 The “modern” Mattie made her first official appearance at Glessner House on Monday March 2nd when she arrived (by way of the female servants' entrance) to be interviewed by Lee Ann Trotter, the entertainment reporter for NBC Chicago. Mattie arrived from the year 1902, stared at the cameraman, and immediately noted “Is that a motion picture camera . . . fascinating.” She proceeded to demonstrate how to make savory shortbreads, noting that she always included a bit of tarragon, which was a favorite of John Glessner. 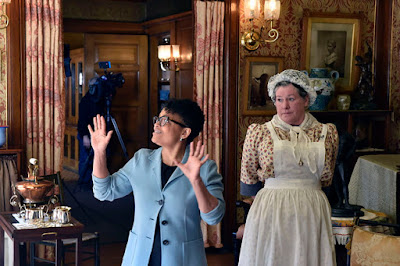 She then took Lee Ann on a tour of the house - a special treat, as Mattie would have rarely ventured outside the kitchen – pointing out such features as the silver closet in the dining room, and the bookcase in the library where Frances Glessner kept her cookbooks. Watch the full segment here. 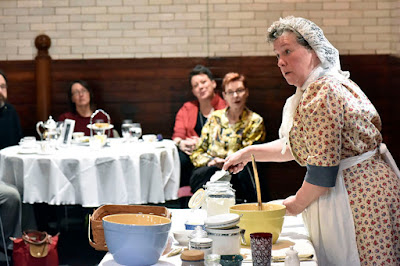 Mattie’s official debut took place on Sunday March 8th when she led a cooking demonstration showing all the steps necessary to make both savory and sweet shortbreads. Attendees enjoyed sampling the shortbreads during the presentation, and each person received a package with all the ingredients needed to make their own shortbreads at home. 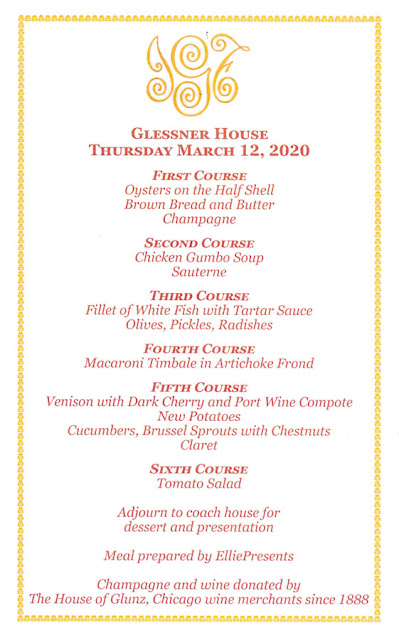 The signature event of the week was the meticulous recreation of an eight-course dinner on Thursday March 12th, based on actual menus recorded by Frances Glessner. All the recipes were pulled from cookbooks in the collection, and several recipes, including those for brown bread and gumbo, were in Mattie’s own handwriting. 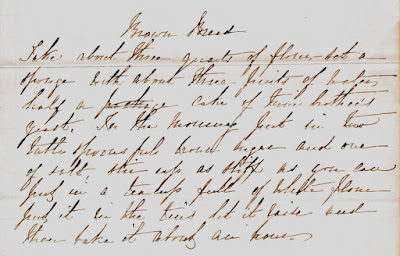 As would have been the case in 1902, some of the foods were prepared well in advance, so that Mattie could focus her efforts on the menu items that had to be prepared immediately prior to serving, such as the fish and venison. 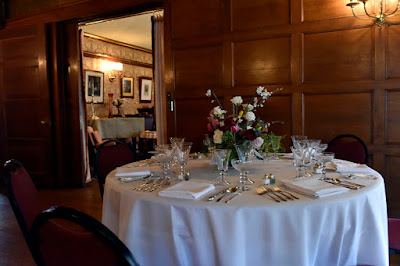 Three tables in the dining room were laid with an array of silver flatware – from oyster forks to gumbo spoons; etched vintage crystal stemware for water, champagne, and two types of wine; and gold-rimmed china similar to that used by the Glessner (minus only their beautiful monogram which was used to adorn the menus). Guests were seated at 6:00pm, at which time the footmen began table service. 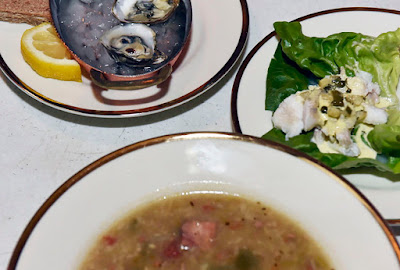 The dinner began with oysters on the half shell, served by the Glessners at virtually all of their dinner parties, accompanied by Mattie’s brown bread, and champagne. The second course featured Mattie’s gumbo, served with sauterne. The first of the three entrée courses consisted of fillets of white fish, with home made tartar sauce, olives, pickles, and spiced pickled radishes. 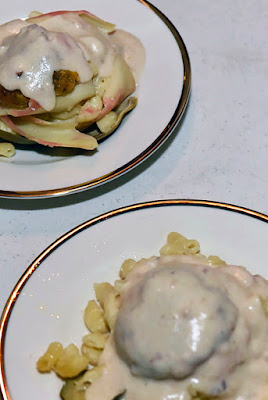 The fourth course was a macaroni timbale served on an artichoke frond. Timbales, consisting of ground vegetables and meat set into various molds, were another favorite of Frances Glessner. 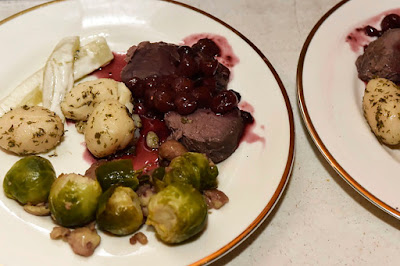 The “main” course which followed included venison with a dark cherry and port wine compote, served with new potatoes, Brussel sprouts with chestnuts, and cooked cucumbers (common at the time). Claret was served with this course. 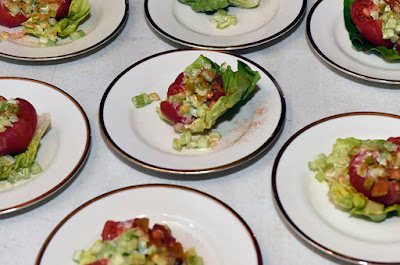 The sixth course consisted of tomatoes stuffed with a celery salad. It was typical for the salad course to be served at the conclusion of the meal, prior to dessert.

After two hours in the dining room consuming the first six courses, guests headed out the front door and turned the corner to the coach house, where they were joined by others who arrived for the two dessert courses and to “meet” Mattie Williamson. 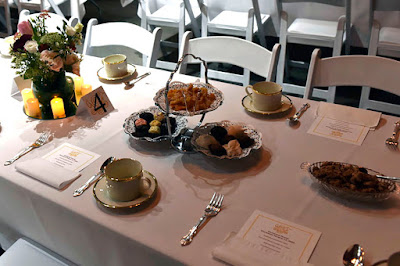 Tables were set with a variety of sweet treats including assorted bon bons, candied orange peel, and candied pecans, all served with hot tea. Individual pistachio cakes, a favorite of Frances Glessner, were served with vanilla ice cream featuring a four-leaf clover embossed design, reminiscent of the elaborately molded ice cream treats that were a staple of the Glessner table. 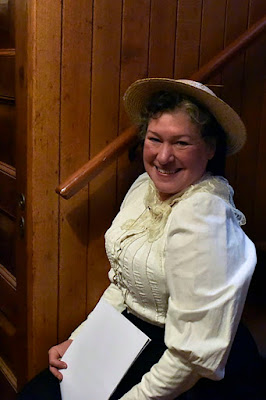 Once everyone had been served, Mattie Williamson, dressed in her “Sunday best,” made her grand entrance, and spent the next 40 minutes explaining what it was like to cook for the Glessners, and the elaborate preparations and careful scheduling required to pull off an eight-course dinner (while also having to cook and feed the live-in staff of eight). The presentation was videotaped and will be posted to our YouTube channel soon. 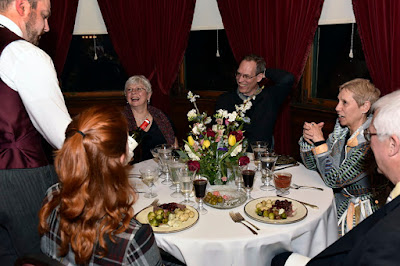 Once again, our deepest thanks to Ellie for her excellent presentation, and her outstanding preparation of all the food. The House of Glunz, Chicago wine merchants since 1888, donated the wines, and Flesor’s Candy Kitchen, established in 1901 in Tuscola, Illinois provided the delicious bon bons. 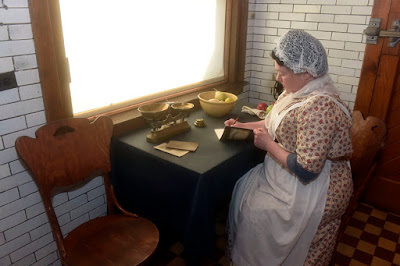 Mattie will return to Glessner House in the future - we hope you will have a chance to meet her in person!