The Glessner Family Arrives in America - Part I

John Glessner had a long-standing interest in genealogy. In 1881, he purchased a large leather-bound journal in which to record his findings, making entries for nearly half a century. Although John Glessner was only the third generation born in America, he noted that details of the Glessner family emigration from Europe were sketchy. He penned “An Account of the Early Glessners” in 1881, but what he wrote we now know to be only partially correct. Fortunately, work by other Glessner descendants and resources made readily available through Ancestry.com make a more accurate and complete account possible.

The story of the Glessner family begins in Bingen am Rhein (Bingen on the Rhine), located in what is now the Mainz-Bingen district of the Rhineland Palatinate in southwestern Germany. For hundreds of years, the town, located at the confluence of the Rhine and Nahe rivers, was controlled by the Elector of Mainz, who served as both Archbishop and prince. The economy of the town was supported by its function as a port, and by the surrounding region known for its winemaking. 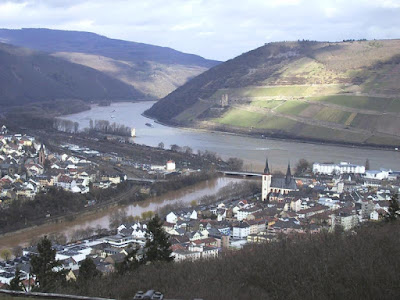 Today, the town is a popular tourist destination, as it sits at the southern end of the UNESCO Rhine Gorge World Heritage Site. Many people go specifically to visit the Mouse Tower, an ancient Roman structure rebuilt by Hatto II, Archbishop of Mainz, whose legend involves the cruel leader being eaten to death by mice there in 970 A.D. Bingen was also the home of Hildegard von Bingen, a 12th century Benedictine abbess, important composer of sacred music, and the founder of scientific natural history in Germany.

In the summer of 1763, two brothers, Johann Heinrich Glasener (John Glessner’s great-grandfather, hereafter referred to as Henry) and Jacob Glasener, made the decision to immigrate to America. Henry was born in 1728 or 1730 (sources vary) to Johann Georg and Barbarae Glaesener; Jacob was born in 1732. Their mother died just as her sons were preparing for their voyage.

Why they chose to leave Bingen at this time is unknown, but they made the journey of more than 250 miles to Rotterdam, The Netherlands, where they booked passage on the Richmond. Henry was accompanied by his wife Anna Elizabeth (Adam) who he had married in 1760, and their daughter Maria Margaret, born in 1761. Jacob was also married by this time. The ship picked up additional passengers in Portsmouth, England and arrived in Philadelphia, Pennsylvania on October 5, 1763. During the voyage, Anna gave birth to a healthy baby boy, which they named Henry. The passenger list for the Richmond shows the last name as Glasener, but the brothers thereafter adopted the spelling of Glessner that we know today. 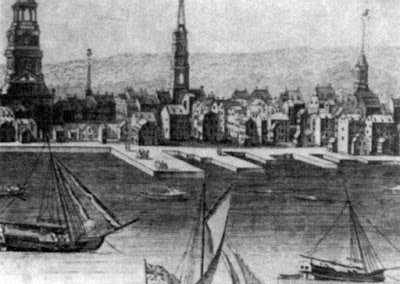 By 1766, and perhaps earlier, the brothers had settled in Cumberland County in southwestern Pennsylvania. George Washington had passed through this area in 1753 during the French and Indian War and five years later Forbes Road was cut through to Pittsburgh, being one of the two great western land routes through the “wilderness”. Forbes Road made the area accessible for settlement and was later used for pioneers traveling west to the Ohio country (where later generations of the Glessner family would move in the 1830s).

The area in which the Glessner brothers arrived was incorporated as Brothersvalley Township in 1771, the same year Bedford County was carved out of the original much larger Cumberland County. The main town of Berlin was laid out in 1784, reflecting the dominant presence of German immigrants, and the present-day Somerset County was created in 1795.

Henry and Jacob both purchased large tracts of land for farming, John Glessner noting that his great-grandfather was a farmer, as Henry’s father had been in Germany. Henry purchased over 230 acres. The land was gradually cleared of timber and used for growing crops as opposed to pastureland, as a tax list from 1783 notes that Henry only owned three horses, four head of cattle, and six sheep. Jacob owned considerably more land and also operated a grist mill and a sawmill.

Henry and Anna had a total of nine children – four daughters and five sons – including a son Jacob born on July 8, 1774; this was John Glessner’s grandfather.  All of the children spoke both German and English and survived into adulthood, quite remarkable for the time, with John Glessner noting:
“The Glessner men were all large, frequently standing a full head above other men – they were all kind-hearted and mild mannered and all respected, not all educated, but all of ability and character.”

The family was active in the Reformed church, with ministers of that faith visiting the area as early as 1770. In 1777, Henry and Jacob Glessner were among the original members and first officers of the Berlin Reformed Church which built a combination log church and schoolhouse that year. The first record of a baptism is dated October 9, 1777 when Sophia, a daughter of Henry and Anna Glessner, was baptized.

A notable and tragic event took place at the church in March 1794. At this time, the congregation was led by Rev. Cyriacus Spangenberg, whose character and credentials as a minister were both brought into question, causing a faction in the congregation. A meeting was held on March 19, with a vote to be taken on whether or not to retain the services of Spangenberg. According to a recounting of the incident in the Bedford Gazetteer in May 1883:

“Jacob Glessner, brother of Henry, was an Elder in the Reformed Church in Berlin, Pa. and ‘one of the most prominent members of the church, of unimpeachable character and possessed of great influence with his fellow members’. . . Jacob Glessner remained silent until just before the ballot was to be taken. He then rose and made a strong speech in favor of a change of ministers. Whereupon Spangenberg, ebullient with rage, sprang to his feet, drew his knife from beneath his clerical robes (the ‘sheep’s clothing’ under which he concealed his wolfish nature) and rushing upon the Elder, drove the glittering blade to his heart. With blood gushing from his wound, he fell to the floor beside the altar and there expired.”

Another account, considered more accurate, noted that after Glessner’s speech, Spangenberg invited him into his home, where he stabbed him three times, and that Jacob Glessner expired two days later. He was buried in the Reformed Church cemetery, with a Biblical passage, Acts 7:58-59, engraved on his slate headstone, recounting the stoning of Stephen and his asking God for forgiveness for his killers. 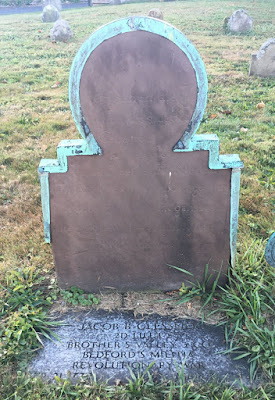 Jacob Glessner's headstone in the Reformed Church Cemetery, Berlin, PA. (The newer ground level stone in the foreground was added in recent years to commemorate his service during the American Revolution)

Following the attack, Spangenberg hid in the marshland outside of Berlin, but was quickly apprehended, and subsequently tried and found guilty of murder. The Gazetteer article concluded:

“On Saturday October 11, 1795, Spangenberg was led from his jail and the unfortunate man, seated upon his coffin, was driven to the place of execution. A scaffold was erected on the commons and upon it he expiated his crime before a large crowd.”

The year of 1794 was important for another reason in the town of Berlin. In 1791, the federal government had imposed a tax on all distilled spirits, the first time the new government had taken such action. The response from farmers in western Pennsylvania, who typically distilled their excess rye, barley, wheat, and corn, was significant, leading to what became known as the WhiskeyRebellion. In June 1794, following subpoenas being issued for sixty distillers who had not paid the tax, a riot took place at the Berlin schoolhouse.  By fall, the Pennsylvania state militia was sent to the area, and Governor Thomas Mifflin set up his headquarters in the home of a Berlin physician. Washington rode at the head of the army to put down the insurrection, but the rebels went home before the army arrived, so there was no confrontation. (An annual Whiskey Rebellion Festival is held in Washington, Pennsylvania, which includes the “tarring and feathering” of the tax collector.) 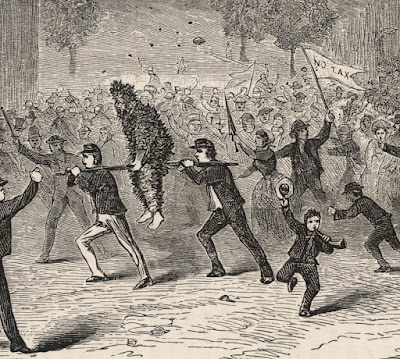 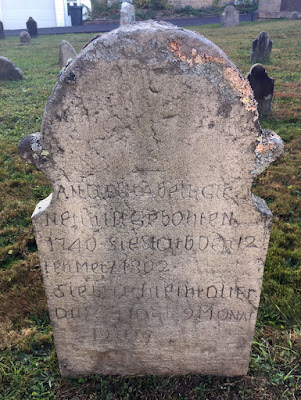 In November of that year, their son Jacob married Margaret Young of Hagerstown, Maryland, in a ceremony at the Berlin Reformed Church. Jacob and Margaret Glessner moved to the town of Somerset, nine miles north of Berlin, where their thirteen children were born and raised. One of those children, Jacob II, was born in 1809 – he was the father of John Glessner, who said of his grandfather:

“He was a cabinet maker by trade and followed the business all his life. He was devoted to the religion of his church (the Presbyterian minister was Rev. Ross and was likely the source of this name which occurs in the family), domestic in his habits and tastes, was a lover of music and in early and middle life performed creditably on the flute and violin. He also sang sacred music in his family a great deal. He owned the first piano that was brought into Western Pennsylvania and for a great many years the only one known in that section of the country . . . His was a quiet and comparatively uneventful life.” 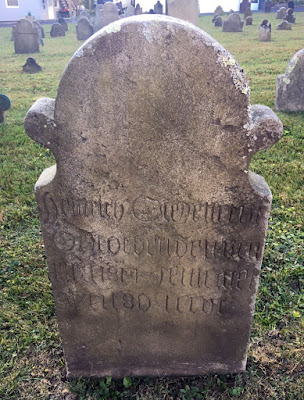 Henry Glessner died early in 1814 and he was buried near his wife at the Berlin Reformed Church cemetery. His estate was filed for probate on March 9 of that year, with his sons Jacob and Peter being listed on the administration bond. 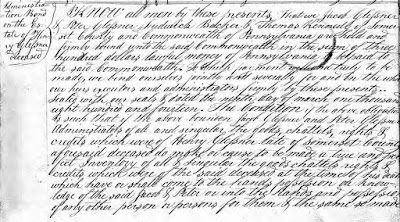 In May of 1839, Jacob and Margaret Glessner moved to Norwich, Ohio to be near their son, Jacob II, who had moved to nearby Zanesville upon his marriage to Mary Laughlin in 1837. After a period of more than seventy-five years, this ended John Glessner’s ancestors’ residency in southwest Pennsylvania. Descendants of other branches of the Glessner family continued to live in the area, and there are still Glessners living in the county to this day. 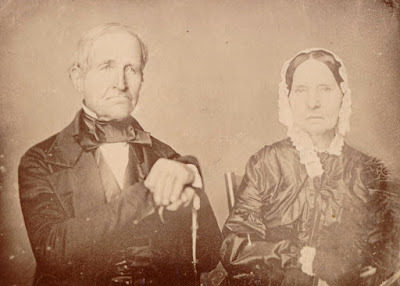 Jacob and Margaret Glessner in the 1850s. The cane upon which he
rests his hands was passed down to his grandson, John Glessner,
and is displayed today in his dressing room at Glessner House.

Next week: John Glessner and his father visit Berlin in 1888 to learn about their immigrant ancestors. Plus, the surprise discovery of an artifact left behind by Henry Glessner.
Note added March 2021: The Jacob Glessner house, probably built around 1770, still stands at 501 Main Street in Berlin, Pennsylvania.