Frances Glessner was a faithful customer of the Chicago merchant John J. McGrath, whose firm provided the finest wallpapers in the city. By 1876, he also served as the exclusive agent for Morris & Co. in the United States. While shopping for her Washington Street house, Frances Glessner would have no doubt seen Morris’s wallpaper designs, but there is no indication she considered any of these papers until the early 1880s.

On March 6, 1883, Frances Glessner noted in her journal that she attended a meeting of the Decorative Art Society, where she found a discussion of William Morris and his designs most interesting. Within days, she purchased a copy of Morris’s 1882 Hopes and Fears for Art, and less than a week later had finished reading it.

Before March drew to a close, she recorded the following:
“I took Mrs. Avery down to McGrath’s to see Wm. Morris designs in materials for furnishing. We had a delightful morning. I selected a lovely combination for The Rocks, but it is too expensive.”

A surviving scrapbook from The Rocks, recording the various wallpapers and fabrics used in the main house, shows some beautiful and dramatic designs, but none of them are by Morris & Co., so the cost obstacle was not overcome – at that time.

Hopes and Fears for Art 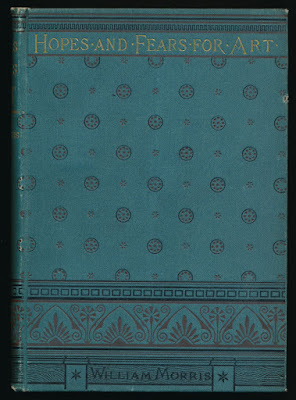 This small volume, published concurrently in both the United Kingdom and the United States, contains five lecture Morris delivered in Birmingham, London, and Nottingham between 1878 and 1881. The five lectures are titled:

The Lesser Arts
The Art of the People
The Beauty of Life
Making the Best of it
The Prospects of Architecture in Civilization
As noted in our previous article, Morris had strong views on a variety of subjects, and those views are expressed clearly in these lectures. Topics range from the value of handicraft to the evils of industrialization, as well as his thoughts on architecture and historic preservation.

An advertisement for the book (priced as $1.25), published in the Chicago Tribune on February 24, 1882, provided the following quote from “an artist”:
“Is not this book the greatest on Art since ‘Modern Painters?’ The same spirit pervades it, that of the reformer profoundly moved by his mission. It is esthetic – strong drink and food too for the upper classes. How will they accept the principle that luxury is the deadly enemy of Art: that the greater part of their artistic surroundings might well make a bonfire? He writes as one who knows, and his style is superb.” 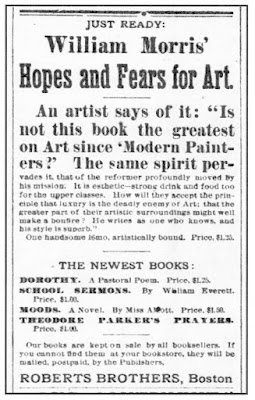 A review published the next month provided another hearty endorsement:
“’Real art,’ says Mr. Morris, ‘is the expression by man of his pleasure in labor’ – an excellent definition, practical and easily understood. Mr. Morris is well known as a poet, but he is also a hard worker. Whatever he says about ‘art’ is the result of careful consideration, earnest thought, and personal experience, and is therefore entitled to an attentive hearing. The present volume is untechnical and adapted to general use and is commended as worthy the man who wrote it, and as likely to be of great service to the man who reads it.”

One of the most beautifully written passages in the work is the closing paragraph of his lecture, “The Beauty of Life,” where Morris discusses his Cause (with a capital C):
“So to us who have a Cause at heart, our highest ambition and our simplest duty are one and the same thing: for the most part we shall be too busy doing the work that lies ready to our hands, to let impatience for visibly great progress vex us much; but surely since we are servants of a Cause, hope must be ever with us, and sometimes perhaps it will so quicken our vision that it will out-run the slow lapse of time, and show us the victorious days when millions of those who now sit in darkness will be enlightened by an Art made by the people and for the people, a joy to the maker and the user.”

When the Glessners met Richardson in 1885, the architect was an enthusiastic supporter of Morris’s work. This admiration was strengthened in 1882, when Richardson made his last trip to Europe and spent time with Morris. Surviving records of the trip note that Richardson visited the Morris & Co. works at Merton Abbey, and he was entertained at the Morris home in Kelmscott. Morris even advised Richardson on a Persian carpet which Richardson acquired for his faithful client, Frederick Ames, in North Easton, Massachusetts.

The year 1882 also saw Morris & Co. commissioned to design and manufacture four stained glass windows for Richardson’s Trinity Church in Boston, his acknowledged masterpiece. Designed by Edward Burne-Jones, three of the windows show scenes of the Nativity, while the fourth window depicts “David’s Charge to Solomon.” There is literally a bit of Morris depicted in this last window. In the upper right-hand corner, the famous story of David and Goliath is depicted, and the head of Goliath being held in David’s right hand is none other than that of William Morris! 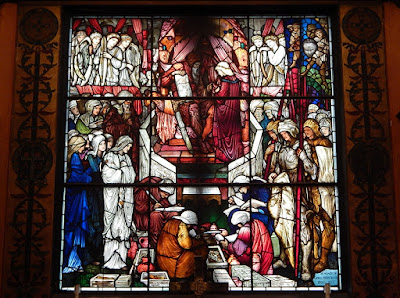 In September 1885, the Glessners visited Richardson at his home and studio in Brookline, Massachusetts and they gathered in his library to review their house plans. John Glessner noted that “this was the room I liked best” so it is no surprise the design of the Glessners’ library borrows heavily from this room. Amongst the books, “rare and beautiful objects . . . and lovely articles of vertu” could be found textiles from Morris & Co. 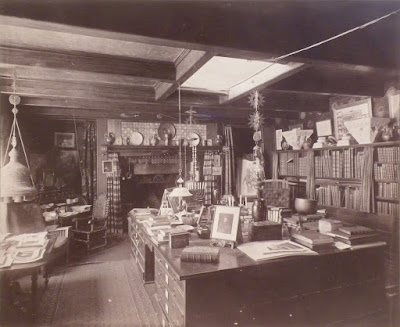 These included the portieres hung in the alcoves to either side of the fireplace. The pattern was “Peacock & Dragon,” the same pattern the Glessners later selected for the drapes and portieres in the first-floor main hall. 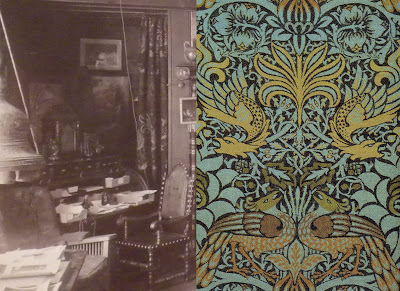 At left: detail showing the alcove and portieres in Richardson's library.
At right: Peacock & Dragon by Morris & Co.

It is interesting to note that one of the items Richardson purchased during his 1882 visit to England was a copy of Morris’s book, Hopes and Fears for Art, the same book Frances Glessner read in 1883. Richardson would have been especially interested in the final lecture in the volume, “The Prospects of Architecture in Civilization,” where Morris shared his views on architecture and its relationship to the decorative arts. The lecture begins:

“The word Architecture has, I suppose, to most of you the meaning of the art of building nobly and ornamentally.  Now, I believe the practice of this art to be one of the most important things which man can turn his hand to, and the consideration of it to be worth the attention of serious people, not for an hour only, but for a good part of their lives, even though they may not have to do with it professionally.

“But, noble as that art is by itself, and though it is specially the art of civilization, it neither ever has existed nor ever can exist alive and progressive by itself, but must cherish and be cherished by all the crafts whereby men make the things which they intend shall be beautiful, and shall last somewhat beyond the passing day.

“It is this union of the arts, mutually helpful and harmoniously subordinated one to another, which I have learned to think of as Architecture.”

By the time the Glessners engaged H. H. Richardson to design their Prairie Avenue home in 1885, both Frances Glessner and Richardson had read William Morris’s influential volume, Hopes and Fears for Art. This shared interest in, and appreciation for, Morris’s thoughts on art and decorating, helps to explain the excellent architect-client relationship that quickly developed, and why so many Morris & Co. products were ultimately selected to furnish the Glessners’ new home.

In the last installment of this series, we will explore some of the Morris & Co. wallpapers, textiles, rugs, and embroideries that were selected by the Glessners, many of which can still be seen in the house today.