Two weeks ago, we looked at the first four houses constructed on Prairie Avenue, all erected in the 1850s. This week we will examine building activity during the years of the Civil War, 1861 to 1865.

During an 1861 visit to Chicago, London Times reporter William H. Russell observed the early houses on the street while a passenger on the Illinois Central, noting “houses which must be the retreat of merchants and citizens of means.” Although the Civil War slowed construction activity in general, it is interesting to note that there were no less than nine houses built during that time frame in the 1600, 1700, and 1800 blocks of Prairie Avenue (none of which survive today).

1862
The first of the War-era houses was built in 1862 for the “Widow Grosvenor” at 1637 S. Prairie Avenue. It was the first of four houses constructed on the east side of Prairie Avenue; all the 1850s houses had been constructed on the west side. The widow was Cornelia (Bogart) Grosvenor, a native of Geneva, New York, born in 1809 and widowed in 1849, her husband having been a prominent attorney in that town. She came to Chicago and built her home, which was also occupied by her son Elisha William Grosvenor, a partner in the commission merchant firm of Grosvenor and Forsyth. 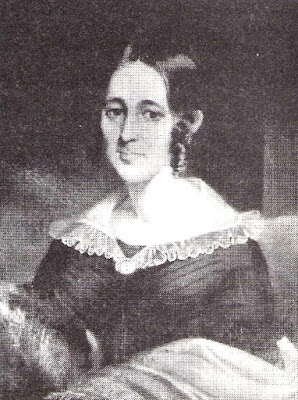 Only one known photo survives showing a portion of the house as originally built, it being a typical two-story brick Italianate style home. Her son married in Flint, Michigan in December 1865 and apparently left Chicago permanently. Within a year, his mother moved farther south and rented her home to the William Gold Hibbard family. 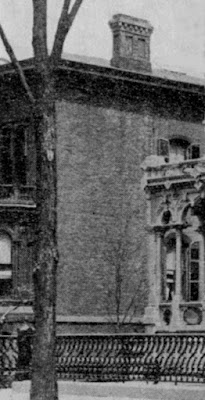 South side of the Grosvenor house as built, c. 1870

For many years it was the home of lumberman Jesse Spalding, who remodeled it in a severe manner to such a point that the original house design was completely lost within. 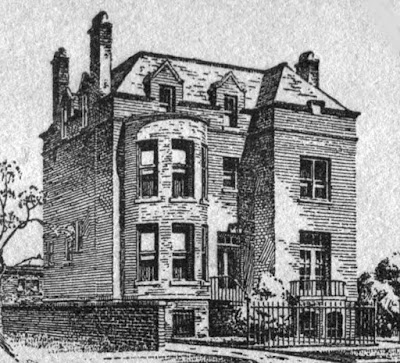 The Grosvenor house as remodeled by Jesse Spalding

The year 1862 also saw the completion of the home of Nicholas O. Williams at 1709 S. Prairie Avenue. He was the head of the firm of N. O. Williams & Co., dealers in hats, caps, furs, and buck goods. No known photos survive, but a description in the Chicago Tribune described the house, designed by W. W. Boyington, as being of brick and stone construction, with a cost of $10,000. It only lasted twenty years before being demolished for the new home of Palmer Kellogg, designed by Burnham & Root.

1863
A significant and long-standing house was built in 1863 for Wirt Dexter at 1721 S. Prairie Avenue, immediately south of the Williams home. The large frame home was described at the time as a “rambling” New England farmhouse, but also sported an Italianate style cupola to take advantages of the uninterrupted views all around. Dexter was a prominent attorney and served in a leadership capacity for many years with the Chicago Relief and Aid Society, including significant service in the years immediately after the Chicago Fire. 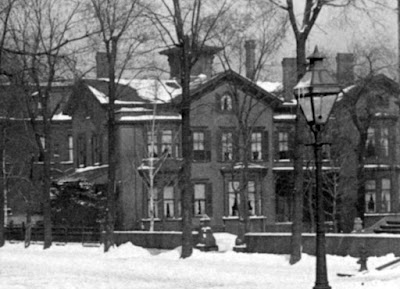 Dexter created quite a stir on Prairie Avenue in 1889 when he added a large brick addition to the front of his house, bringing it up nearly to the lot line. This especially annoyed next-door neighbor George Pullman who preferred large lawns in front of the homes. A later owner tore down the original frame house and moved the large brick addition back on the lot, but that, too, was demolished in the 1920s.

A more modest home was completed the same year at 1635 S. Prairie Avenue for Col. Robert Forsyth, who served as the general freight agent for the Illinois Central and later Chicago & Eastern Illinois Railways. Again, there are no known photos of the house, but a bit of information is provided by Addie Hibbard Gregory, in her book A Great-Grandmother Remembers. (Addie, age 8, moved into the Widow Grosvenor house in 1867 with her parents and siblings). Of the Forsyth house, she wrote:

“In the early days two of our neighbors, the Williamses and the Forsythes, had long bowling alleys in separate one-story buildings stretching down to the track of the Illinois Central, which followed the lake shore then just as it does today. The roofs of these alleys were arranged as pleasant places from which to view the lake . . . The grounds of the Forsythe home were most elegant. There was a fountain in the middle of the lawn which was surrounded by four white stone statues, and the narrow rectangular walks were made of small white clam shells.”

The house later passed through several owners and occupants and was demolished by the early 1900s.

1864
One house of note was completed in 1864, the large brick house at 1736 S. Prairie Avenue, for Granville S. Ingraham. Surviving photos show a third-story mansard roof which may well have been a later addition atop a more typical Italianate style house of the War period. Ingraham came to Chicago in 1856 and made a fortune as a wholesale grocer, later investing heavily in real estate. The 1870 census shows real estate valued at $225,000 and personal property of $100,000 (today the combined value would be well over $6 million). 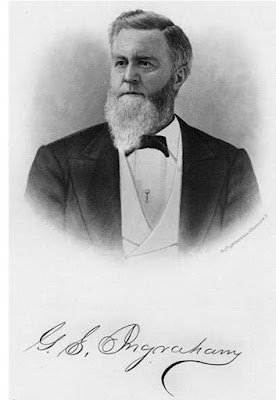 Ingraham sold the house long before his death at his winter home in Pass Christian, Mississippi in 1892. It is best remembered today as the long-time residence of lead manufacturer Hugh McBirney. 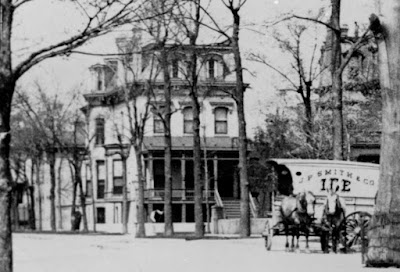 Ingraham/McBirney house as it appeared circa 1890 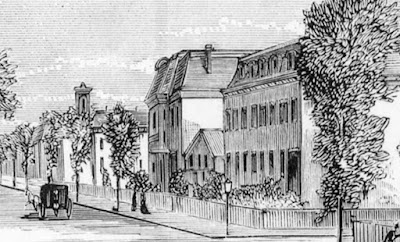 1812 S. Prairie is the short house shown at center in this 1874 illustration

All of these were demolished in the 1880s and replaced with larger homes. Another home, built at 1630 S. Prairie Avenue, survived well into the 20th century and had the distinction of being the smallest house on the street.

Calumet Avenue
Calumet Avenue, which lies one block east of Prairie Avenue starting at 18th Street and then running south, developed a bit later than Prairie. Only one house is known to have been built by the War period and may have been constructed as early as 1859. This was the large brick home of Daniel A. Jones, built at the northwest corner of Calumet and 22nd Street. Jones made his fortune in the packing and real estate businesses. He served for many years as the president of the Chicago Chamber of Commerce, being first elected in 1869 and leading that organization through the critical years following the Chicago Fire.

Jones died in 1886 and his house was demolished in 1911, to make way for the American Book Company building, constructed the next year on the site from plans by architect N. Max Dunning. It was designated a Chicago landmark in 2008 and was recently restored as part of the Marriot Marquis hotel property.

J. Q. Hoyt
A small number of homes were constructed on nearby streets during this period. One worthy of note was the home of J. Q. Hoyt, built in 1863 at the southeast corner of Wabash Avenue and 23rd Street. The Hoyt family referred to their home as “Florence Place.” Were it not for the wooden sidewalk around the property, the large Italianate style home with exuberant trim and stately cupola could easily be mistaken for a country home rather than an urban residence. 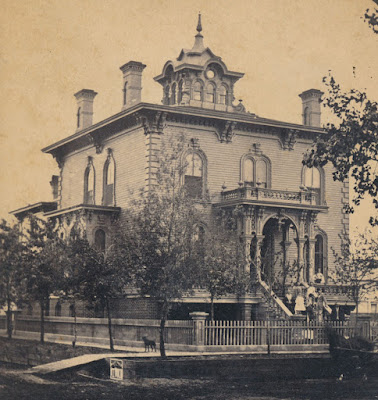 John Quincy Adams Hoyt came to Chicago in 1856, making his fortune in wholesale groceries, and entering local Republican politics, being a close friend of General Ulysses S. Grant, John A. Logan, and Stephen A. Douglas. He served as alderman for many years and filled the role of acting mayor during a portion of the Civil War, when Mayor Julian Rumsey was absent. In 1868, Hoyt moved to New York City, where he was instrumental in funding the elevated railroad system. (Within weeks after the Chicago Fire, the house was converted into a hotel, maintaining the name Florence Place. In 1874, it reverted to private residential use.) 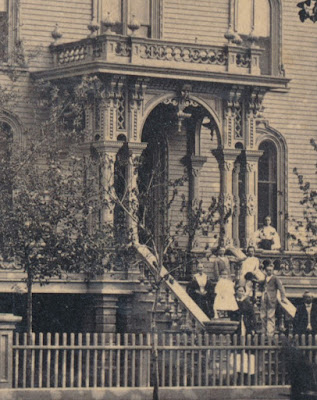 The Hoyt family enjoying the front porch of Florence Place, circa 1865

Conclusion
There was a building boom on Prairie Avenue following the Civil War. It is estimated that by the time of the Chicago Fire in 1871, there were 40 houses standing or under construction. The fire completely bypassed the neighborhood, leading to a second wave of construction immediately following, led by those whose homes had been destroyed.

We will resume this story in 2021, the year in which the City of Chicago will commemorate the 150th anniversary of the fire. Those articles will focus on the impact the fire had on the residents and their businesses, and more importantly, the extraordinary impact the residents had on rebuilding the city.