In September 1930, exactly 90 years ago, Frances Glessner Lee had a Clavilux Junior installed in her co-op apartment at 1448 N. Lake Shore Drive in Chicago. It was the home version of the Clavilux, developed by Thomas Wilfred to show his light art in a theater setting. In this article, we will look at Wilfred’s development of this art form, how Chicagoans would have been introduced to it, Lee’s purchase of her unit, and what became of it after she died. 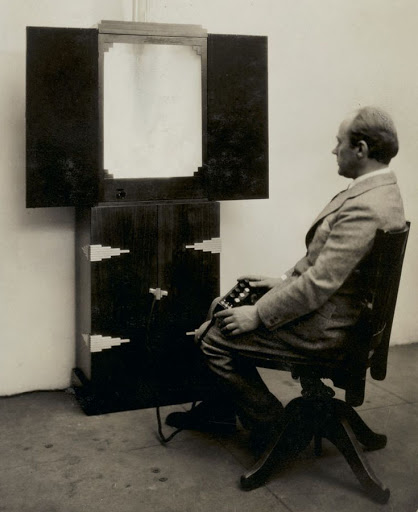 Born in Denmark in 1889, by the early 1900s Wilfred was in New York experimenting with colored glass and light, the start of a life-long obsession with the manipulation of color, light, and motion. He was not the first to treat light as an artistic medium, but is regarded as the first to consider it a formal art. He developed the term “lumia” to refer to his new art and noted that it should be observed in silence. This quote by Wilfred summarizes his thoughts on the subject:

“Here light is the artist’s sole medium of expression. He must mould it by optical means, almost as a sculptor models clay. He must add colour, and finally motion to his creation. Motion, the time dimension, demands that he must be a choreographer in space.”

He constructed his first Clavilux in 1919, the Latin origin of the name meaning “light played by key.” Sitting at the large console (which others often called a color organ, a term Wilfred did not himself like or use), Wilfred could control the light projection in terms of color and motion, creating an infinite number of possibilities. Compositions were assigned opus numbers and were played from detailed scores. The first public performance was at the Neighborhood Playhouse in New York in 1922 and was enthusiastically received by the press. Additional models were built allowing Wilfred to tour, and he also founded the Art Institute of Light, which had its own recital hall.

By 1930, he had developed the Clavilux Junior for those interested in bringing the technology into their own home. Only 16 were made, of which Frances Glessner Lee purchased one and came into possession of another. In later years, Wilfred focused on recording his lumia and in utilizing his art form in theatrical projections. He died in 1968 by which time his compositions had been acquired by the Metropolitan Museum of Art and the Museum of Modern Art, the latter having featured Wilfred in a 1952 exhibition, 15 Americans, that placed him alongside Jackson Pollock, Mark Rothko, and Willem de Kooning.

Wilfred’s work would have been known in Chicago, where the Tribune made note of his successful 1922 inaugural performance in New York. Although the article referred to “Wilfred’s curious Clavilux,” it noted that it kept the Neighborhood Playhouse sold out for two weeks.

In November 1923, Wilfred was invited to speak at Chicago’s Cordon, a women’s club composed of artists and those who supported them. (Frances Glessner Lee’s mother, Frances, was a long-time member). Wilfred returned to Chicago the next year, giving a full performance at the Blackstone Theatre, where he showed his “recent amazing developments.”

An interesting use of Wilfred’s art occurred in 1928 when it was incorporated into the Goodman Theater’s production of Ibsen’s The Vikings of Helgeland. Given that the setting of the play was northern Norway, just south of the Arctic Circle, it seems likely that the lumia were utilized, at least in part, to depict the Northern Lights, a comparison that has often been made by those who have experienced his work. When the play was produced on Broadway two years later, however, it was noted that his technology was also used to project scenery. Wilfred’s lumia would have also been seen by thousands during the Century of Progress World’s Fair in Chicago during 1933 and 1934.

The most dramatic use in Chicago would have been seen in 1929-1930 at the Bal Tabarin ballroom in the Hotel Sherman, where there was 3,000 square feet of blank wall space covering three sides of the room, literally a blank canvas on which to project lumia. An electrical engineer, sitting in a projection room above the ceiling, simultaneously controlled 27 projectors from a central keyboard. 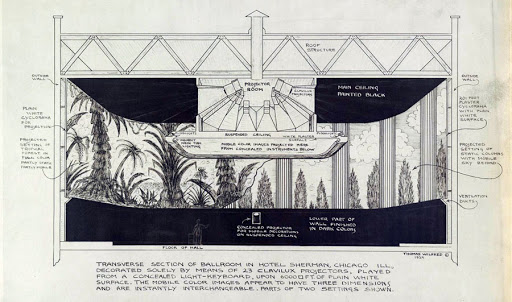 An article in the March 1930 issue of Popular Mechanics noted that “this is the first ballroom in the world to use light exclusively for interior decoration,” describing the appearance in detail:

“Oriental gardens, desert mirages, swirling stars and other unusual effects glow and dissolve on the walls of the Bal Tabarin . . . Whole schemes of interior decoration can be altered in a few seconds . . . Suddenly stately Grecian pillars appear. They look as solid as stone. They glow with changing colors against what appears to be a sky of infinite depth. A sea opens up behind the columns, ships loom out of the dim horizon, then disappear. The entire scene dissolves and gives place to a performance of slowly whirling light masses that suggest the nebulae of the heavens. A sort of mechanical séance gives evidence of the magic accomplishments of expert lighting artists and engineers. As the mysterious figures fade, the walls assume the appearance of the bottom of the sea where weird shapes slip about, and the entire area glows with a soft hue, associated with the depths of tropical waters.” 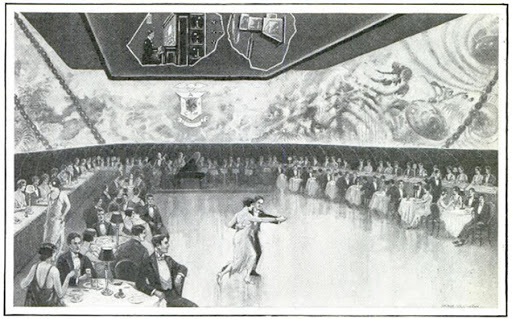 It is not known how Lee became acquainted with Wilfred’s work, but the Thomas Wilfred papers at Yale University record that she purchased the fourth Clavilux Junior unit he made, and the first designed to fit into a corner. She paid $500 for Unit #85 which was completed on July 7, 1930, the walnut case designed in a striking Art Deco form with prominent hinges mounted to the face of the upper and lower doors. Wilfred came to Chicago to install the unit in her apartment on September 18 of that year. 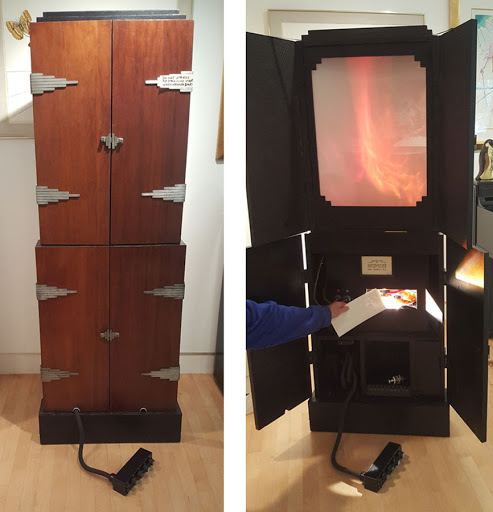 To operate, Lee would have selected from amongst various glass records, each of which was hand-painted with a distinct composition that would create the projected image, produced when light would travel through a reflective cone into a concave gap between an internal piece of curved illustration board and the glass front. An “extension keyboard,” attached to the unit with a heavy cable, would have allowed Lee to manipulate and customize the light and its movement from the comfort of her chair.

Of great interest is the fact that Unit #86 was purchased by Dr. George Burgess Magrath, Lee’s close collaborator during the 1930s in the development of the Department of Legal Medicine at Harvard University. Lee and Magrath had known each other since the early 1890s, but had reconnected on a significant level in 1929, when both were hospitalized for an extended period in Boston. Wilfred completed Unit #86 using it initially as a demonstration model prior to Magrath’s purchase. It was installed in his room at the St. Botolph Club in Boston on August 2, 1930. After his death in 1938, Frances Glessner Lee acquired Magrath’s unit, making her what appears to have been the only person at the time to own two units. Records in her personal papers note repairs and alterations to the unit in 1942, which were undertaken by Irving & Casson – A. H. Davenport Co. The representative discouraged her from painting the cabinet white, instead she had it lacquered. 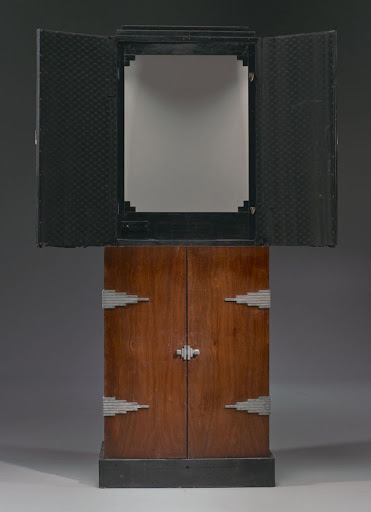 There are a few interesting names on the list of owners for the other Clavilux Junior units. Chief among them is Leopold Stokowski, long-time conductor of the Philadelphia Orchestra, who was present at the first demonstration of the Clavilux in 1922. Three years later, Wilfred played the Clavilux as an accompaniment to Rimsky-Korsakov’s Scheherazade, conducted by Stokowski. In 1940, Stokowski incorporated the same dramatic lighting effects into the opening sequence of the Disney movie Fantasia, with its dramatic silhouette of musicians set against a backdrop of rich, changing colors.

The survival of Wilfred’s legacy, and many of the remaining Clavilux Junior units, is due to the dedicated efforts of Eugene Epstein, who first became aware of Wilfred’s work in the early 1960s, when Epstein was a graduate student in radio astronomy at Harvard. During that period, he encountered a Wilfred installation at the Museum of Modern Art, wrote to Wilfred, and a rapport was established. Epstein acquired his first unit in 1965, and built up, with the assistance of his nephew, A. J. Epstein, what is now known as the Carol and Eugene Epstein Collection.

The two units owned by Frances Glessner Lee were put into storage in the old farmhouse at her New Hampshire estate, The Rocks, after her death in 1962. A local antiques dealer, Roland Shick, acquired them at a sale at The Rocks shortly before the farmhouse was demolished, and later worked with Stan Harrison who made them functional. In 2015, they were put up for sale at auction, with Epstein acquiring Unit #85 and later Unit #86.

The first solo exhibition of Wilfred’s work in over four decades, Lumia: Thomas Wilfred and the Art of Light, was organized by the Yale University Art Gallery and ran from February to July 2017, after which it traveled to the Smithsonian American Art Museum in Washington, DC for a run from October 2017 until early January 2018. 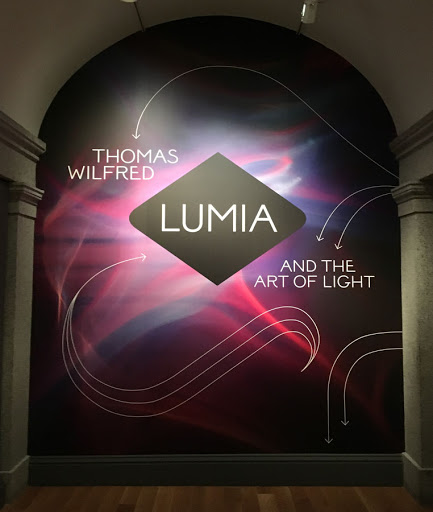 In a truly ironic twist of fate, Lee’s fully functional Unit #86 was included and demonstrated in the Lumia exhibition. Lee’s famous Nutshell Studies, which formed the exhibition Murder is Her Hobby: Frances Glessner Lee and the Nutshell Studies of Unexplained Death, opened on October 19, 2017 at the Renwick Gallery, another facility of the Smithsonian American Art Museum in Washington, DC, just 13 days after the Lumia exhibit opened. 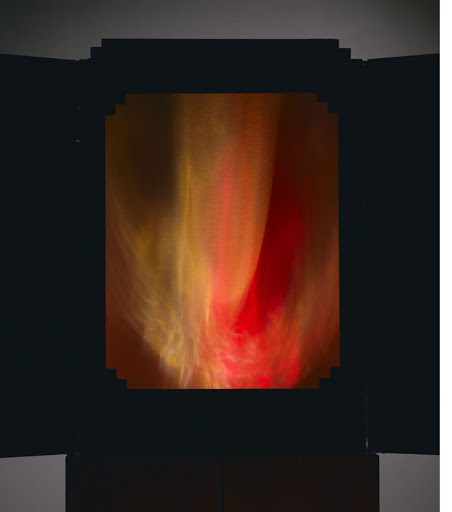